I saw a few days ago that Oscar Freire is retiring at the end of this season and is hoping to make the Olympic team this summer for Spain, but he thinks it is going to be a challenge because Alejandro Valverde and defending Olympic champion Samuel Sanchez have already qualified. That seemed strangely weird to me since Valverde had not raced a bike in 2 years and had already been selected to ride the Olympics. Forget about his 2 year suspension for whatever. But, I suppose the Olympics is supposed to be a sprinters race and Valverde can sprint pretty well. At least he could 2+ years ago.

So then yesterday, Valverde won the stage of the Tour Down Under, the first Pro Tour race of the year, and is tied on time for first place overall, with only a curcuit race left. So, Jose Ivan Gutierrez, one of Valverde’s team mates states how great the result was and that their team, Movistar, was not going to contest the race and challenge Gerrans for the overall. Here’s the whole article at Cyclingnews.com. Here’s the quote from the article-

Gutierrez concluded with the assessment that Valverde will not contest Gerrans’ leadership during the final criterium in Adelaide on Sunday. “We’re not a sprinters’ team,” said the Spaniard. “In a one-on-one sprint, Alejandro would beat Gerrans, as he would beat Petacchi, Freire, Boonen etc. Probably the only one he wouldn’t beat is Cavendish. But in the middle of 130 riders, it’s mission impossible. GreenEdge has the perfect riders for criterium racing and they’re used to this kind of cycling in Australia. In Europe, we don’t have any. But that’s ok, we’re happy with what we’ve achieved.”

This is completely wrong on lots of levels. For one, if I were the promoters of the race, I would be pissed that it is announced in the media that one of the guys tied for first in GC wasn’t going to race for the win. Nothing discourages spectators and fans more than a race that has been decided before it happens. I know it is not breaking any rules not to try to win a race, but to me it seems chicken shit not to try when you are tied on time going into the last race. Especially a Pro Tour stage race. But, even if Movistar and Valverde have no intention of trying to win, they could tell Gerrans and GreenEdge that, but where is the upside to announcing it to the general public? There is none. Someone needs to sit down with Jose Ivan Gutierrez and tell him to not speak to the media when he is going to say silly stuff that really detracts from the race and from the sport in general. It is just a bad thing all around. 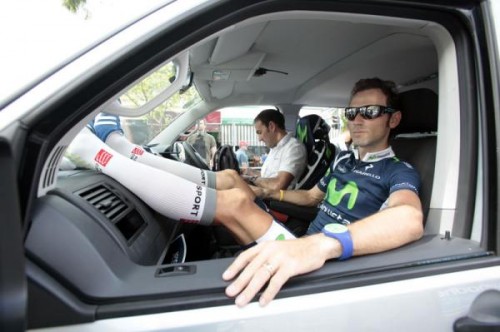 I guess Alejandro didn’t put his feet up during his last two year time out.

9 thoughts on “Valverde – It’s Always Something”