I was interested in watching Brandon Dwight and Peter Webber race together the last couple weekends. I’ve been following them for the past year or so, from afar, and was interested in watching in person to see how well they worked together. It is weird how many races that they seemed to be riding with each other nearly the whole time. This doesn’t mean any disrespect to either of these guys, but I didn’t see anything that made me think that they were doing much to help each other. They just happen to be on the same team and have about the same amount of ability.

In Madison, the course was sketchy. Brandon was climbing better than Peter, so Peter was always playing catch up the whole day. In Louisville, it was a little different, but not that much different. They weren’t really riding together like you would think that team mates would. Brandon was behind with a lap to go and had to make a big surge to get back up to Peter to get into contention. They did ride nearly identical times on the last lap, but unless I missed something, it really looked like they were racing each other to the finish line at the end. But, it is cross and there isn’t a whole lot that someone can do when it gets down to just you and your team mate.

I was thinking more about team riding, in all aspects of the sport, and I don’t want to burst too many of your bubbles out there, but it really doesn’t apply to the majority of riders. I’d say that if you’re a Cat 2 and lower, maybe just go ahead and forget any type of team tactic discussion before the start of nearly any race. Most the stuff you would discuss is in Bike Racing 101, so it really doesn’t need to be rehashed before the start of every local event.

I think it is so strange listening to guys that are Cat. 4’s, talking about the previous weekends races and they are saying how they buried themselves for a team mate with a lap to go, got shelled, and then the team mate finished 6th or whatever. It is pretty apparent that they have no idea what they are talking about, but everyone (other Cat. 4’s) agrees that it was an honorable sacrifice and good team work. What they don’t realize is that the newer the riders are to the sport, the more unorthodox the tactics are, making them nearly impossible to read.

I’d say that a lot of time, even in the Pro Tour ranks, team work is pretty meaningless. Modern day team work that is, team work that puts your whole team in the wind for kms upon kms. Most of that is really done for TV time I think. There is a ton of team work done by riders wearing the same jerseys that really help each other out. Stuff like letting your team mate out of the wind when it is in the gutter, etc., but the majority of stuff that these guys do as a cohesive unit is usually for naught.

I’m not saying here that all team work in the Pro Tour is wasted, I know they have to do something to try to win races, but many times, ultimately, it comes down to which one guy can sprint faster, climb better or is just that much stronger that usually wins.

But, the Pro Tour and local races are far apart. There is too much diversity in riders abilities in local and regional teams to allow much real team work to happen.

I think that most riders in local races should do their best to try to win each and every race themselves, without chasing down a team mate down in the process. That is probably the most that should be expected from someone wearing your jersey. It’s hard enough trying to keep track of what you’re trying to accomplish, let alone trying to watch out for a bunch of other guys whose race tactics are all over the place. Save most of the interaction with your team mates until after the race, when you talk about it over a few beers. 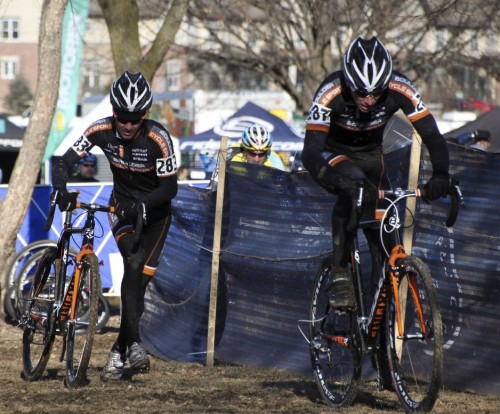 These guys were never more than a few seconds apart for the last three races of the season. 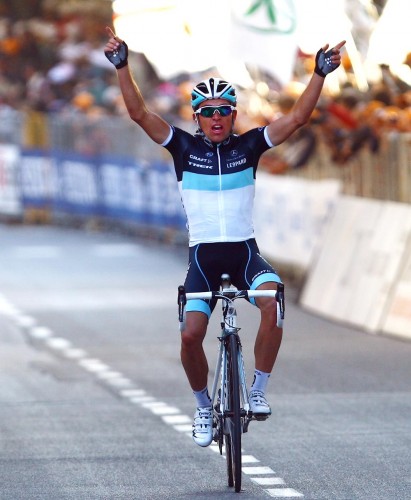 Oliver Zaugg, here winning Lombardi, after letting Sky and Garmin use all their riders up on the final climb.