I’ve had a couple days to let the last two weeks sink in now. I think the most important thing is that I learned a lot about myself. At least I learned a lot about my present self. How I am now and how I deal with self imposed pressure and a million other things. That is just one of a thousand different things I’m taking away from this experience.

Okay, this sounds arrogant, it does even to me, but I completely expected to win the last two weekends. Intellectually, on paper, I was the favorite by miles. I’m pretty sure that nobody in either race has ever beaten me in a cyclocross race. So, feeling confident was a double edged sword. I like challenges, but everything seemed to be going too right, which kept spooking me more and more. I hated it.

I don’t need to go into a play by play for the race. I said it pretty well in an interview after the race, in cross you need to be able to ride in all different kinds of conditions. And that was the case the whole weekend. The course was completely different every 15 minutes throughout the day and this was a reoccurring fact each and every day. So each and every lap I rode the whole time I was in Louisville was much different than any other one I rode. This was a good thing for me. I’m pretty good at recognizing and analyzing where and where not to ride a bike, especially if you trying to go fast. I didn’t fall once the whole time I was there. I slid out a couple times, but that is just riding a bike in mud/ice/dirt.

The venue is very good for a cyclocross race. It has enough vertical change to make it challenging. The weather was not even close to a friend of the promoters. They couldn’t have gotten any more unlucky with the changing conditions. It went from nearly 60 degrees to way below freezing, plus throw in a full day of rain and then on and off snow flurries each night. There were a ton of things that went wrong for them, but they did a pretty great job of playing catchup, especially with the course. The course kept getting shorter and shorter and wider and wider. They kept moving the ribbons over to allow people to stay on their bicycles and not get hurt. I wrote this about the Madison course and I will state it again here. A cyclocross race is supposed to be technical, not dangerous. Rutted frozen mud ruts is dangerous. And most of the course was icy ruts after Thursday afternoon. By Sunday afternoon, there were sections of the course that were probably 40 feet wide.

I feel kind of strange stating this, but I never really got to ride my bike as fast as I could the last three races. That is at Master’s Nationals, the qualifying race at Worlds, then at Worlds itself. I was there to win and not show off. But, it is still kind of stinging not getting to see how well I was really going. If I could redo one thing, I would have ridden the ELite race at Nationals now, but there are no do overs. I put in a pretty good effort on the 2nd lap in the Worlds, but still wasn’t going completely full out. I had a ton of pressure in my tires, but there were still a million places that I could have pinch flatted a tire. Frozen, sharp ruts tend to do that, so I tried not to take any chances. Plus, riding full out in sketchy conditions sometimes isn’t the fastest way to go around a cyclocross course. Keeping your eyes up ahead of you, picking the correct lines is the key to going fast in conditions like this. I did a pretty good job of doing that I think.

It was nice seeing Don Myrah win. He and I both had pretty bad tastes in our mouths since trying to win this race in Belgium a year ago. I think that was my main drive. I felt that last year, nothing more could go wrong, and I still thought I should have won. I hate injustice, and the call up procedure at the Belgium race is still a sore subject. That is why I was so adamantly against a random call up procedure for the Louisville event. There is no place for randomness in sports. You want the best athlete competing to win. Randomness will reduce the chances of that occurring. Then throw in the “Belgium randomness” from Master’s World last year and it was just cheating. I obviously can’t get past it, but this helps.

Okay, I’m sure I’ll write more about this again. I’m kind of beat from the last two weeks. Just spending so many hours outside in the elements the last 10 days does that. Not even talking about how much standing around and riding around in the muck drains you. We watched Ned race and took off in the afternoon yesterday. We stopped and ate in St. Louis and got back to Topeka around midnight last night. It is amazing how wasted my van is. Dirt clumps everywhere. It’s going to take me a couple days just to get all the equipment back into usable condition. I plan to sleep a bunch over the next few days. I can’t believe it’s half way through January already. 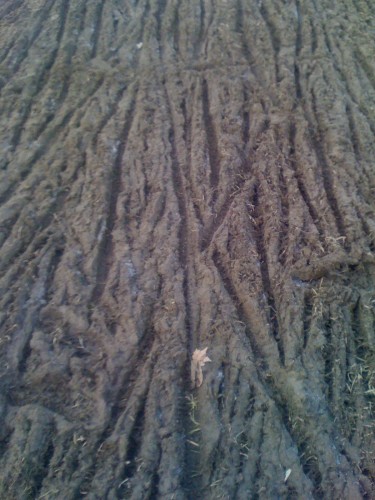 This was the condition of the course before Bruce and gang made it raceable again. 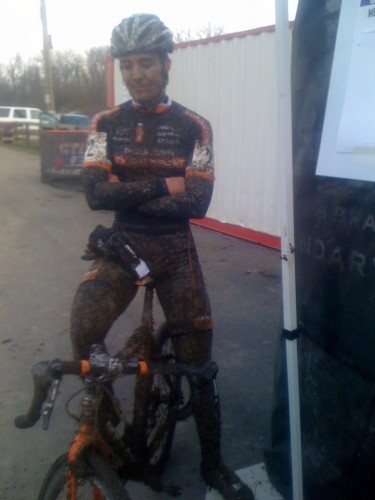 Brandon Dwight moments after finishing 2nd by a wheel. 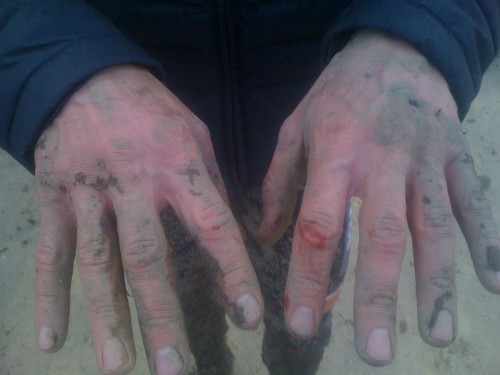 Peter Webber's hands after winning. He must of caught a bunch of posts. 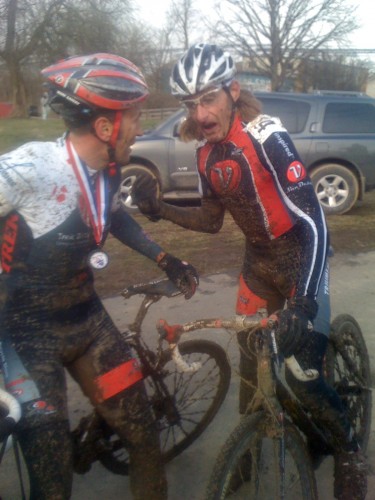 My buddies, Mark Savery and Bill Elliston after their race. Mark rode an excellent technical race and finished 3rd behind Webber and Dwight. A super result, congratulations! 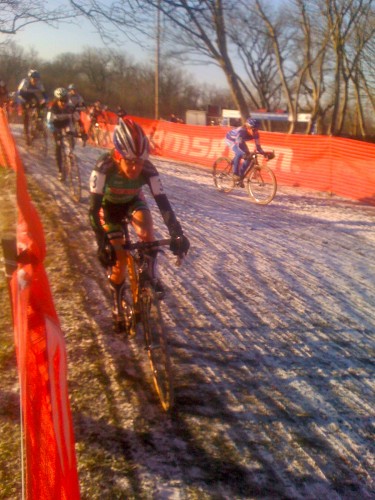 Catherine getting the hole shot at the Worlds. She crashed hard in the first lap and got rattled, eventually finishing 9th. She's gonna be thinking about it for awhile. 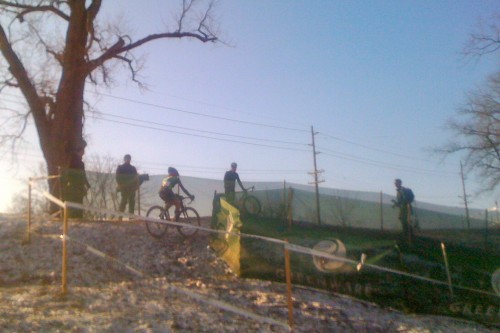 Catherine was the only rider to clean the walk up all Sunday, all men and women. And she made it all 4 laps. 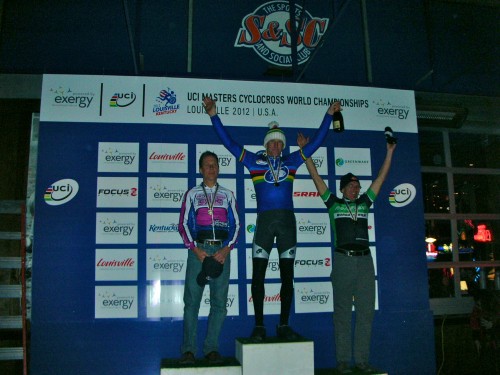 8 thoughts on “A World of Thoughts”