Yesterday’s races at the Cyclo-X Nationals were excellent. Both the men’s and women’s races were great, even though they were complete opposites. Katie Compton dominated from start to finish. She is just that much stronger. The men’s race might of been the best cyclo-x race I’ve watched in person. The course was the best it was the whole weekend, with parts of the course matching each rider in the front group skills.

I learned a ton from watching even though I’m still regretting not starting. I’m not sure I’m doing all this for the right reasons. I race bicycles for new life experiences and challenges, not for the results or notoriety. The course yesterday was more of a hard circuit race, with two climbs, than a normal cyclocross event. I liked it a lot, especially when it hardened up some. I probably wouldn’t of had one of those days, but you never know unless you race. I didn’t.

There are lots of reasons Jeremy Powers won. But when it came down to it, he just was more powerful at the right time. Jonathan Page made some huge tactical errors with his pitting routine. That pretty much disconnected him from Trebon and Powers, thus lost him the opportunity to race for 1st. Trebon was loosing too much time, in micro amounts, cornering in the technical sections, thus not having the energy when he needed it. Tim Johnson just was a notch below the other 3. Lots of people will express their opinions, but there is no question that Powers dropped Trebon on the hardest part of the climb, the section of the course that should of been Trebon’s forte’.

The ride of the day in the men’s race was by Zach McDonald. He came back from the dead after the first lap and reconnected with the front group after chasing the first half of the race. He should take some credit for dislodging Tim Johnson and Jonathan Page from the front two. I’m not sure the results would have been different, but he definitely played the loyal team mate card when the smack came down.

The ride of the day in the women’s race was by local Midwest rider Kaitlin Antonneau. She is going to be very good at the sport. She already is. The main reason she finished 2nd is that she is so smooth and rode within herself. Her lines were better than most of the top men. And she never stops pedaling. That is a key in conditions like this. So, good ride Kaitlin.

The guys at Madison promoted an excellent event. Anytime there was a problem, it was addressed quickly and corrected. They got super lucky with the weather. Near record highs for some of the days, no precipitation at all. I’m not sure this course would have been raceable if there was a ton of snow on it. There was way to much elevation change to be able to negotiate it pedaling most of the time. I guess we’ll see again next year. USAC got the results out super quick and all the races started pretty much exactly on time. It was great officiating. I think a ton of people were scared off by lots of different reasons, mainly the weather I’d guess. But, none of that too much.

It is very hard to try not to compare lap times between the different races. I realize that it is completely irrelevant because the course was so much different depending on the time of each day. Plus, they changed the course throughout the day each and each and every day. The sand pit for Sunday’s race was nothing. That was probably 15 seconds shorter right there. But even though I know it is like comparing apples to oranges, I find it hard to ignore. I do know that Katie Compton was riding incredible fast and would have loved to see her ride the men’s Elite race. She is that good.

We’ll cross season is over for most everyone now, except those going down to Louisville for Master’s Worlds next week and those going over to Europe for real Worlds. I’m not as against this after Christmas Cross Nationals as I was last week. I’m going to have to think about it for a little bit before I take a solid stance. 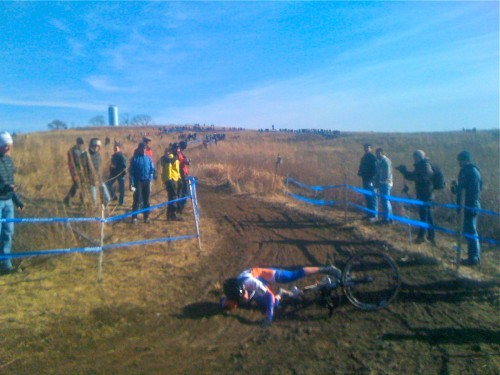 Katie Compton had a few mishaps, even though she destroyed the rest of the field. 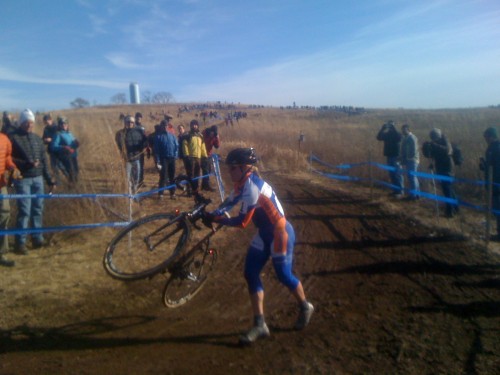 She got up quickly and got back to business. 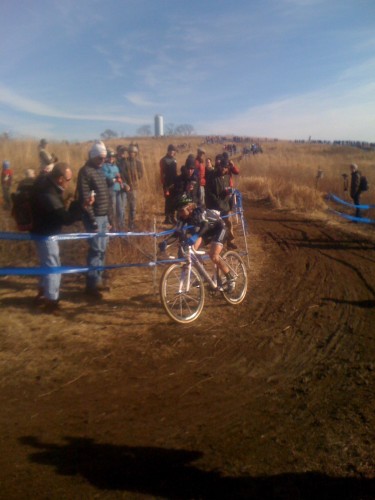 Kaitlin Antonneau (Cyclocrossworld/Cannondale Cyclocrossworld), showing the correct line in the very same corner. 98% of the men were getting this wrong too. 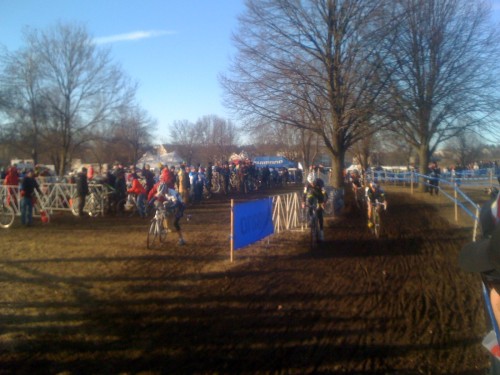 Jonathan Page doing another bike change. Trebon didn't change once. I don't think McDonald did either. 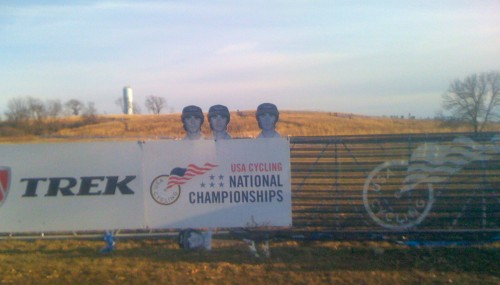 Zack McDonald watching himself race the elite race after he won the U23 race on Saturday. 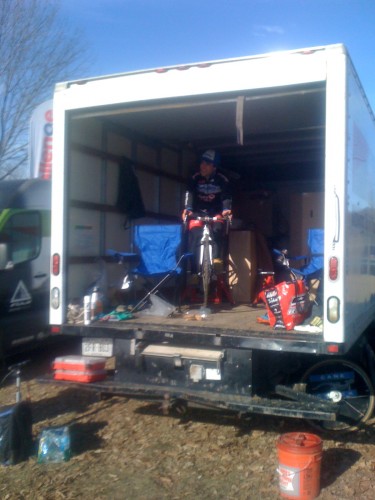 Warming up out of the wind. 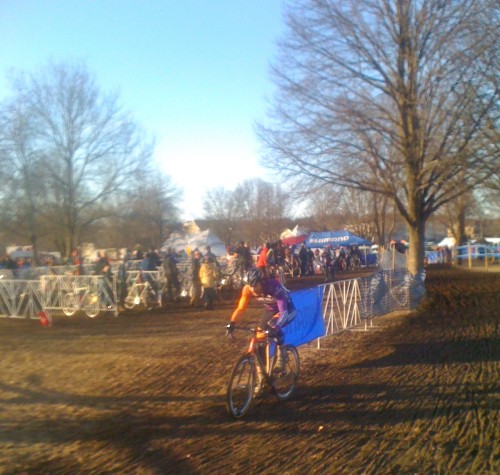