I’ve weighed in all the facts and have decided not to race today. I just don’t see enough upside to it. The way the course was changing up yesterday lap to lap, I can’t imagine having a good enough result to offset potential downside consequences. Actually, I can’t see having a good enough result to be happy about it at all. I was getting called up on the 6th row, which isn’t that bad really, but I have only 3 days to rest before the first race in Louisville. And during that 3 days I have a 7 hour drive day. It is going to kill me watching the race, but I can’t not watch.

I stood around for over 4 hours again yesterday morning watching the 45+ race, which my friend, Don Myrah won over Jon Cariveau, of Moots. Then Bill was next up racing the 40+ race, along with a ton of other friends. Bill started back in the smoking section in the 6th row, but got up to the top 15 in the first minute because he dismounted and ran as soon as the group hit the frozen ruts in the soccer field. He ended up finishing somewhere in the top 25, with a potential broken rib from a fall in training the day before. Mark Savery, local from Omaha, finished an awesome 5th behind Brandon Dwight, Peter Webber and Adam Myerson. Shadd Smith, from KC, was 12th, which was great too, considering his start and how many days he has been sick the past month. It was a very good race to watch.

I was pretty frozen by the time Bill was done racing, feeling pretty beat. We left Madison and drove the hour down to Delavan to Trudi’s mom’s condo. It was nice getting out of a cramped hotel room. We went for an hour and a half ride later in the afternoon with the temperatures in the lower 30’s. I felt horrible at the start, but pretty okay by the time I was done. I’m just going to rest up the next couple days. I’ve had a pretty busy last week and don’t see much upside to getting any more tired. I have good form right now, so I’m only going to ride hard only once before Thursday’s qualifying race in Louisville.

This race today is going to be pretty epic. It depends on what the course condition is at 2:15 for me to make a good pick. I’d be picking Todd Wells for the win if he was racing. Super fit plus, great bike handling is the key in these conditions. If it is super sunny and melts a bunch, then it’s Trebon by a smear. If not, then it’s probably going to be between Paige or Powers I’d guess. I can’t pick Tim Johnson to be in the mix because of his recent sickness and season in general. I hope I’m wrong in that. I’d love it if somebody else got into the mix. On big, one day events, that is the time that athletes do incredible things. This is one of those days. It’s going to be super interesting.

You can watch the events live here. The live coverage begins at 12 noon CST with the women’s race first at 12 and the men’s race starts at 2:15. 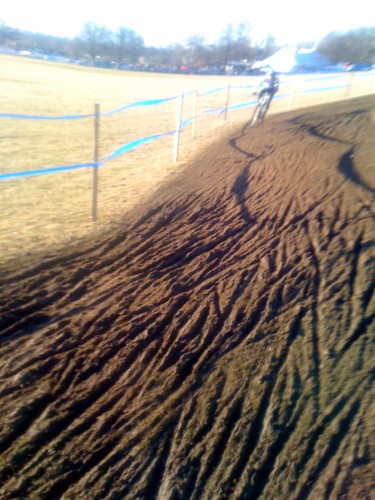 The course was pretty much frozen ruts most of the morning yesterday. Pretty treacherous. 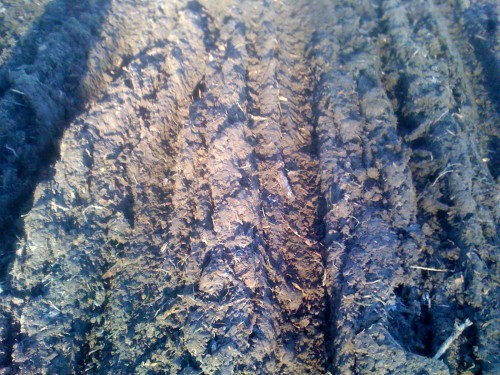 Close up of the soccer field. It is not conducive for skinny tired cross bikes. 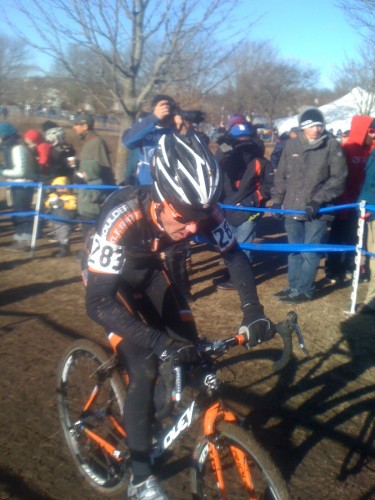 Brandon Dwight riding smoothly on his way to a National Title. 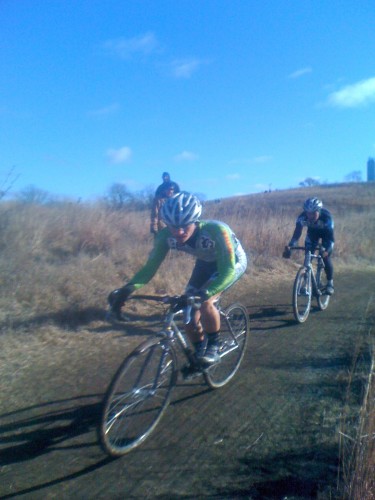 Bill had a great start, faded a little, but made the best of the situation. 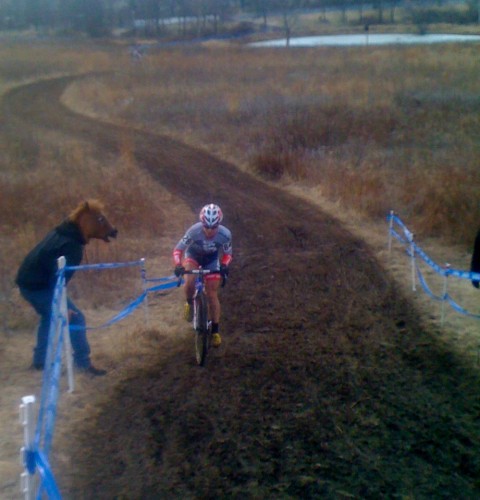 This is my friend, Kelly Fisher-Goodwin, riding on Friday, getting cheered on by Mr. Ed. 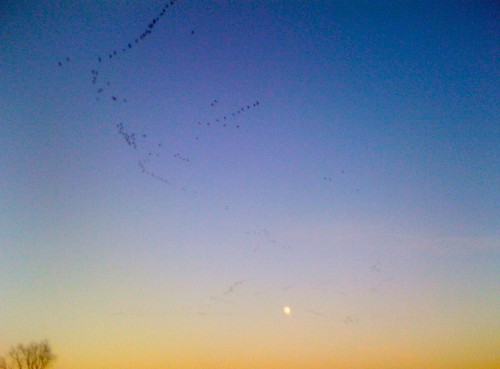 Riding back yesterday afternoon, there were geese flying over for nearly 30 minutes straight. WIth the moon being nearly full, it was very impressive. A very good sign for the Indian side of my brain.