I said on Sunday that I was going to do a post about my tire coming off the rim on Saturday in Houston. I’m not sure were I want to go with it. I guess I want some advise. I barely did anything wrong. I’m putting barely here because I should of been more concerned when I peeled off the new Specialized tire that I’d just glued on the Friday before and it came off the rim pretty easily, taking virtually all the glue off with it.

I originally thought that it was the Belgium rim tape I was using, maybe it was too old, but then I realized that the tape was stuck to the tire pretty darn good.

So now the chronological order of things. This is pretty much how I always glue tires onto carbon rims. Two weeks ago I took a new Shimano wheel and glued on a new Specialized cross tire. I put a layer of 3M Fast Tack on the rim (use only 08031) and then another layer a couple hours later before I put the Belgium rim tape on. I let that dry while putting a layer of Vittoria Mastik One on the rim strip of the tire.

I let both of those dry and then used the Masik One on the Belgium tape once again and mounted the tire. I would normally use Fast Tack here too, but there is this rumor out there that the solvents in Fast Tack dissolve the adhesives that hold the rim strip onto the tire itself. I’ve never noticed this on good tires. I always wear the tires out before the rim strips have a chance to get loose I guess. (And my old mechanic from Levis, Calvin Jones, from Park Tools now, keeps sending me nasty little notes reminding me of the way of the Jedi mechanic.)

So, that is what I did. Then I raced the tire in Austin and it seemed to work good. But, then I got the shipment of new FMB custom tires from Europe and decided to mount one of those on the wheel. So I got prepared to spend 10 minutes getting the tire off. To my surprise, pleasant one at that, it came off with just a little stiff thumb action. And the rim was nearly clean. I think I was so happy that I didn’t have to get a screw driver under the tire to peel it off, I kind of just overlooked the issue of it not being stuck on well enough for my liking.

Then I glued the FMB tire on the same way, except I didn’t use any Fast Tack at all this time. Only Vittoria glue. The reason is, according to this chart, Vittoria Mastik One is the best glue. But, maybe it’s only the best glue for non carbon rims, I don’t know, because when I looked at my wheel after the race in Houston and peeled the tire off the rest of the way, there wasn’t much, if any glue left on the rim once again.

Now my high rent, FMB custom tire has the Belgium rim tape stuck onto the rim strip, along with a bunch of pine needles and dirt. I just ordered a can and a bunch of tubes of the Continental Carbon specific rim glue. I’m not sure why other than a guy at the race in Texas said he was using it with stellar results. I guess I did it because I don’t have an explanation of why my tire failed to stay on the rim. I’ve been gluing tubular tires on carbon rims ever since they started making them and have never had a problem. I don’t use the rim tape on road tires, just cyclocross tires that I’m riding at such low pressures. (Too low, it seems, sometimes.)

Tonight I took some 80 grit sand paper and scuffed up my rim pretty good and put on two more layers of Vittoria glue. I’m going to try to put the FMB tire back onto the rim once again, while waiting for the Continental glue to show up in the mail. I used solvent to get most all of the stuff stuck into the Belgium tape. Tomorrow I’m going to try to reattach it once again. I’ll let you know how that goes.

But in the mean time, Calvin or whoever else thinks they are experts, or not experts, at this process, let me know your thoughts on the subject. It is kind of scary, I pretty much rely on my tires to be stuck to the rim at all times. 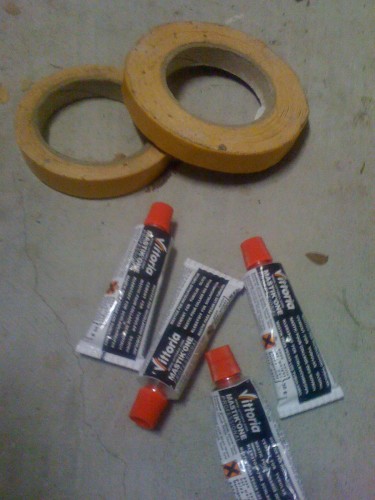 Everything I thought I needed to keep tubular tires on carbon rims.