Yesterday I was thinking about how much the equipment has advanced in the sport of cyclo-x. Guys are riding nearly the UCI limit of 6.8 kg (14.99lbs) bikes. That is pretty amazing considering the extra weight of just the tires.

Then I started thinking about how much the sport itself has changed, here in the US, and with that change how much more regulation and monitoring has happened from the UCI and USAC. I’m not sure when this new modern era of cross first started here in the US. Maybe somewhere around 2000, when the Nationals were held in Kansas City the first time. I pick 2000, because when the Nationals were held in the Presideo in S.F., the course was super short, maybe less than 4 minutes, so it would have to still be classified as cross of the past.

It is strange to think about how hardly anyone was into enforcing any type of cyclo-x rules until recently, the last few years.

When I won Cyclo-X Nationals in Santa Cruz, Ned broke off the front of his bike in a muddy bog, left it there and ran to the wheel pit without his bike. He just got relegated a couple slots. No one was really too concerned about the real rules of the sport, even at Nationals.

Or look at the Providence RI Elite Nationals the first year in the snow, 2005. I don’t remember exactly how they were lining us up that year, it might have been the first year that they used UCI points. But, they failed to clear the snow off the road that they were using for the start finish stretch. There was a huge crash on the start because the shoveled area was about 8 feet wide. Probably 1/2 the field either fell down or got caught up in it.

I remember getting into a pretty heated argument with Adam Myerson that evening, after the race, in a hotel lobby. I’m not sure if he was the UCI technical guy already then or just part of the organization putting on the race. I couldn’t understand how the whole park that the race was held in was plowed except for the road the race was using. It was incredibly dangerous and unfair to all the participates. It really didn’t go anywhere since it was after the fact.

Anyway, that never could happen anymore, at least I don’t think it could. The sport has matured enough to make sure the courses are UCI legal, which is mostly a good thing, I guess. That being said, there are a lot of rules that are just stupid. Like the tire width rule. They changed a rule that didn’t need to be screwed with. There was nothing the matter with the 35mm width rule. But, no, they had to lower the width to 33mm, with no real explanation. Stupid. And many others. But, that is just the UCI.

So, there are more rules, but more participates, so maybe the rules aren’t scaring anyone off. A lot of the rules that bother me don’t really apply to the average cyclo-x racer, so in that respect, they aren’t rules that hinder the growth of the sport.

Hopefully we’ll figure out how to keep the forward progression of the sport going. I don’t think they are going to do it by awarding more and more UCI races to just about any promoter that pays for the sanction. There need to be less UCI races in the US with more emphasis on each race. At least that is how I’d do it if I were Czar of scheduling. But, that being said, it is really the competitors that drive the growth of the sport. It is an eclectic sport that attracts eclectic people. And that is a good thing, in general, for the health of cyclocross here in the US. 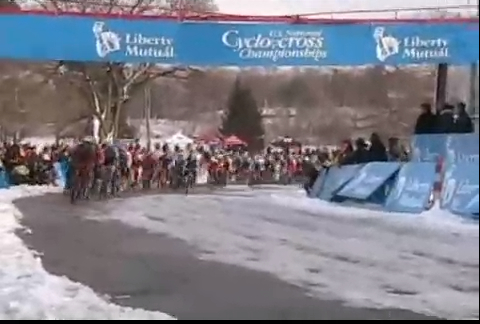 Elite men’s start in Providence in 2005. The clear road was less than 10 feet wide, not even close to the UCI rule.

5 thoughts on “Progession in US Cross?”