Yesterday didn’t quite go like I expected it to. I got to bed pretty late because my computer screwed up and iPhoto won’t load at all. So, all my photos from the last 10 years are not assessable right now, maybe lost for ever?

I realized when I woke up that my automobile license tags were going to expire at the end of this month. I had meant to renew them online last week, but spaced it out. And I’d read about the lines down at the Shawnee County Treasurer’s office being long, so I didn’t want to mess with that.

Anyway, I went online and got all the way through the process and it screwed up after I entered my credit card number. When I tried to reenter the information, it wouldn’t allow it because the numbers had already been entered. The screen message said to call a phone number. So, I called the number and was on hold for over 1/2 hour. So, I decided to go down to the Shawnee County offices and experience the masses. Little did I know.

They have a number roll, like the Baskin Robbins ice cream shop had when I was a kid. I pulled out number 891 and looked at the counter and it said 711. I couldn’t believe it. I was nearly 200 people back. So, I left and went to a coffee shop downtown and spent an hour and a half goofing off. I came back to the Courthouse, and after I went through the metal detector again, I went in to look at the counter and it was at 729. That was 18 people in 1 1/2 hours. There was a employee in the hallway telling everyone to sit down and not stand by the exits.

I went over to the worker and asked her if my number was good for the next day. She told me to take a sit and they’d get to me as soon as possible. I thought she was joking. I told her I got my number nearly 2 hours earlier and they had only called 18 people, so there was not much of a chance anyone would be getting to me in a timely manner. She told me again to take a seat. I told her I could do the math and that I had no intention of waiting. She told me I was lucky that they had serviced 20 people and that the line was shorter. I think at least 5 people that were listening to our conversation got up and left.

So, I left too. I went to Starbucks and ran into a friend there and he told me that they had a live counter online that you can go check your number. I went home and my brother Kris found the counter link. In the meantime, I called the phone number and was on hold again. Eventually, after an half hour, this guy came on and I told him my problem. He reset the pin numbers that I’d entered and told me I could try it again online.

I entered the numbers so slowly and checked them over 5 times before clicking submit. I was amazed it worked. That was about 4 in the afternoon. So I clicked on the counter and they were over 900 at the time. So, if I would have waited, I could most likely have had to wait around 5 more hours. That would have been at total of 6 1/2 hours to get the stickers for my license plates. Insane.

I talked to a lady that got there at 8:30am and had been there about 3 1/2 hours and was still 15 numbers back. So she was going to be there about 4 hours to renew her tags. She said she tried to do it online and it screwed up also.

I’ve read about the horror stories trying to renew tags here in Topeka the last few months, but I didn’t really think much about it. It is much worse than anything I could have expected. Someone, everyone there needs to be fired down. It is broken. And so under staffed that they should be so embarrassed, they shouldn’t open their doors in the morning. They should just send out the stickers for free and ask for donations until they can get their shit together and do it in a right and in a timely manner.

No one can be expected to spend a day of their lives renewing their car license tags. The website sucks, mainly because if it crashes or you make a mistake entering any number, you don’t get a chance to do it again without having a person you call on the phone reset your entries.

But, this is going to be the norm more and more here. I’ve witnessed it all over the world. The poorer the country, the longer the lines and time it takes for services. Remember the lines on the TV of people in Russia waiting in bread lines before the Iron Curtain fell? I do. In Peru, trying to change a plane ticket took nearly a week at the airline’s Lima downtown office. There were huge lines at the banks in Santiago Chile and they would only let one customer at a time into the lobby. There is going to be lots more waiting and much slower service in all aspects of our lives, unless something changes economically soon.

Anyway, I just had enough time to barely get my bikes to the car wash. And man, are they destroyed. I mean they need new everything. The bearings in the wheels are even super rough. I need to get some Gore-Tex cables from SRAM. Those cables are completely sealed and should make it to the end of the season. I used to ride them on MTB back in the 90’s and then they disappeared for 15 years and now they are back again. They are a lot of trouble to install, but after they are installed, they work great in the mud. This sport takes a ton of energy even when you’re not racing. 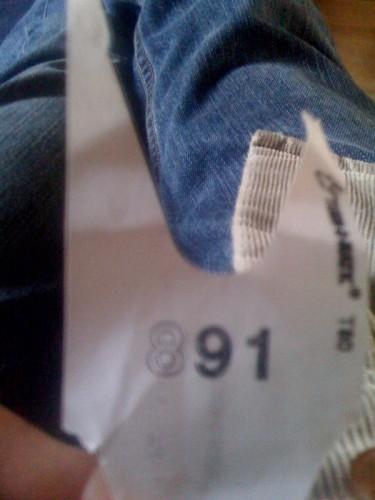 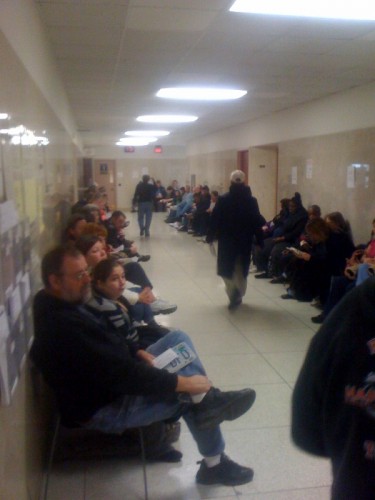 This was just some of the people waiting in the hallway to renew their tags. 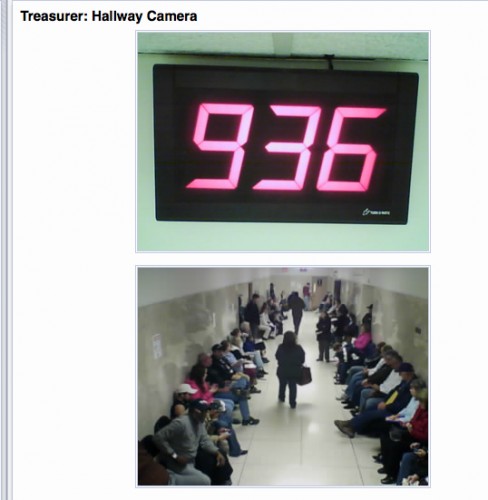 The Shawnee County Treasury cam. The one thing they do right, sort of.