Saturday’s race was a completely different beast than Friday’s. It rained most of the night and the course, even though it handled the rain alright, was pretty destroyed by the time the Elite race was held late in the afternoon. There was a ton of off the bike forward movement. Way too much for my liking. My knee was sore before the start, but I’d been eating Motrin by the handfuls and it didn’t feel anything before the start.

We went over and pre rode the course at 11 pm and the descent was nearly not ridable at that point. It only got worse after the other classes made it into deep mud footprints. I got my normal random call up, last row. I can’t complain because because I got such a good call up the previous night. I told Bill before the start that Todd was going to win. He is good in mud. I figured Tim Johnson in 2nd. That couldn’t have happened because the Cannondale riders, Tim and Driscoll didn’t start. Today is a UCI C1 race and it is obviously more important than yesterday’s race. Ben Berden was the only new guy I saw and think there were a few less guys on the start line than the night before.

I didn’t pass anyone on the pavement. I didn’t really try. Once we got into the sloppy grass spaghetti section, I started picking guys off one at a time. After about a lap or so I got up to about the place I finished the night before 13th. I was riding with Joseph again and thought maybe I’d try to help him again. That didn’t really pan out because he was having a super bad day with a seized up back. He had an altercation with a dog on Wednesday training and crashed. It was catching up with him.

So, I rode up to 11th and just pretty much stayed there to the finish. That was the best place I could finish to not get any UCI points. I’m not sure where I could have finished if I could have raced full out. Probably not that much higher, maybe a few places. But, we’ll never know. I wasn’t good today either, but the conditions were okay for me.

The descent off Mt. Krumpet was beyond treacherous. I’m not sure anyone rode the whole thing. I sure didn’t. I think I crashed 3 out of 6 laps. Mainly at the bottom. I remounted and rode the bottom section every lap and took a couple big diggers. Some of the crowd on the hill was being pretty mean with their heckling. One guy yelled to me, the lap after I crashed the lap before, “Hey, great idea riding since it worked out so well for you last lap.” I wanted to flip the guy off, but needed both by hands at the time. The guy didn’t understand I would rather slide down the whole descent on my face than try to negotiate it on my legs.

I flatted with 2 laps to go and had to change from Challenge Limus to Fangos. I had Limus on because they are the deepest tread available on cross tires. Going from that to the nearly flat Fango was horrible. I couldn’t ride anything. Hardly on the flat. It shows how important it is having the right tires. No wonder all the World Cup riders show up in moving bike shops with 2o sets of mounted wheels.

I think today we’re suppose to climb up Mt. Krumpet twice a lap. Why not make a super hard course just that much harder? In super deep mud, walking. I’m not looking forward to it, but it is what it is. Even though I’m under the weather, I think I’m getting some pretty good training doing these races. At least bike handling skills, if not form.

Todd Wells did win the race over Chris Jones, Ralpha-Focus. Tristan Schouten had an awesome finish, only 31 seconds back to finish 3rd. And Troy, Todd’s brother was right behind Tristan. Anyway, today should be interesting at the front with the Cannondale guys all rested up, missing out on all the downhill running/walking/sliding. I have to finish out of the top 15 today, so 16th is my goal. It seems so silly. 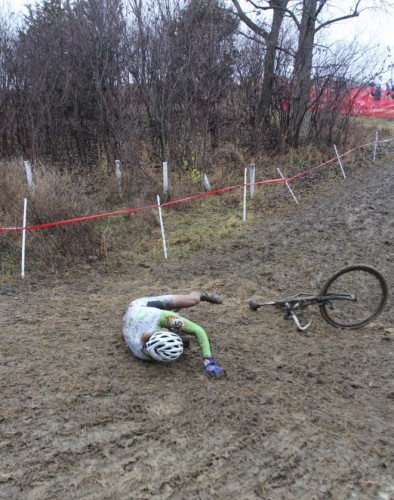 Not one of my better attempts at riding the descent. 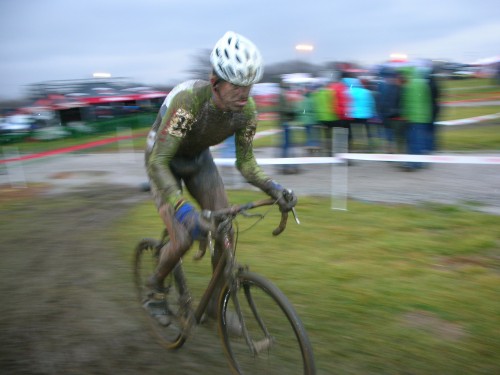 I was upright most of the time. It was pretty soupy all day. Vision wasn't the greatest. 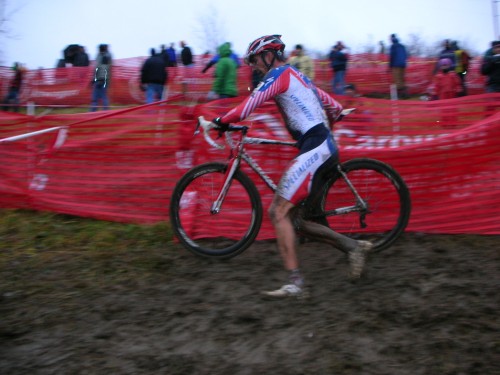 Todd negotiating his way around one of the downhill switchbacks. Today is the last day for Todd to wear his National Championship jersey, since it's his last cyclocross of the season. 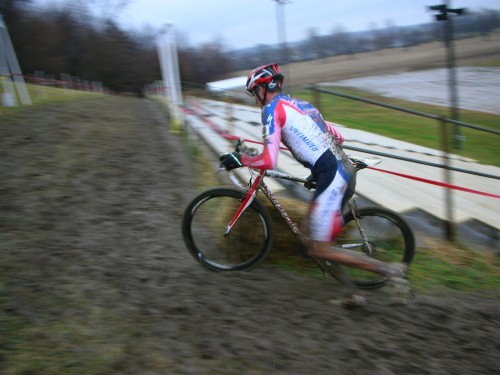 And Todd off his bike again, on the run up by the bleachers. 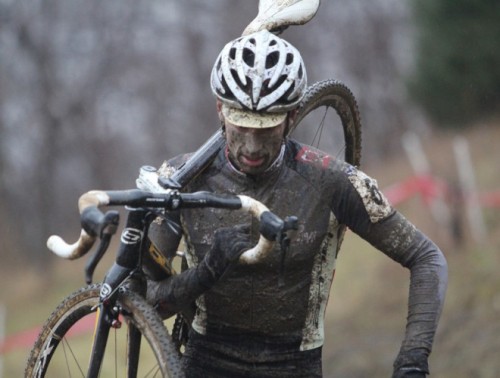 Tristan running his way to 3rd. 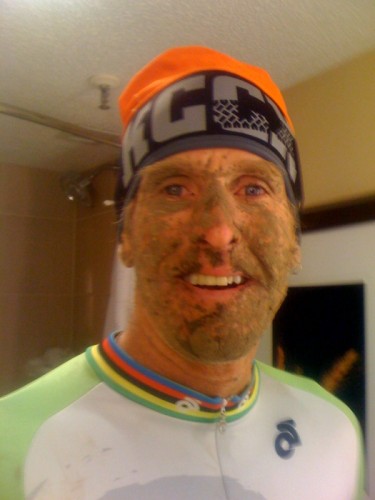 A lady in the hotel came up and said "you got a little muddy?" and I said yes. I wondered how she knew it, since I'd power sprayed myself off at the race and changed into dry clean clothes. I guess I'd missed my face. 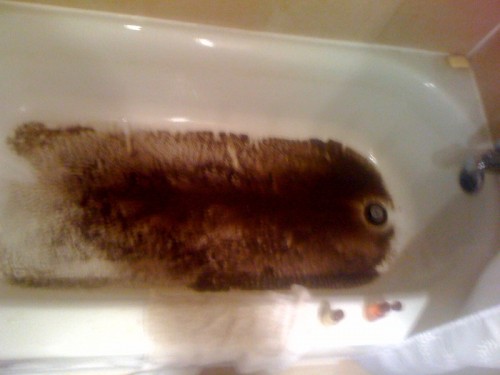 The tub says it all.