Yesterday’s race in Broken Arrow was going to be a challenge. The course was super hard. Lots of altitude change and lots of wind. I didn’t have that much optimism going into the weekend, but after Friday night, I thought, just maybe.

The day didn’t start out that well. I had a tooth ache most of the night and didn’t sleep much. The dentist is on my Monday schedule. Then getting in my diesel van, driving to get coffee in the morning, something wasn’t working that well with the transmission when I got up to highway speed. We kind of limped to the course and the whole day at the race, in the back of my mind, I was worried about getting back to Topeka.

Ben’s Cat. 3 race was first. Ben hadn’t raced since the Tour of Lawrence, July 4th. He had some chronic fatigue, mono sickness and just never got better. So coming back with two hard cross races was eye opening for him. He looked pretty great the first 3/4 of the race, but it got long. Probably because of the course. It got down to the same 3 guys from the night before coming into the last lap. Bob Cummins flatted, so that left Ben with Tanner Culbreath, the race promoter. Ben attacked Tanner with about 1/2 a lap to go and won handily. But, he was hurt, which should be expected.

Catherine raced next. She won again also. She wasn’t going as well as the day before, but the course suited her better. Lots of climbing and more technical descents. She really improved at the dismounts and that is what cross is all about, trying to get better every time you race. $750 in the kitty for her win.

I had stood around for the 4 hours before the race. Mainly watching Ben and Catherine race. I didn’t feel much, not good, not bad, not tired, not perky.

I knew who was going to be going fast. Jake, 2nd from the night before, was riding the best. Plus, Joseph Schmalz, KCCX,from Lawrence, who sat out the night before was there. I knew Joseph hadn’t had his best racing in Louisville last weekend, so thought, just maybe.

The race started out up a 100 meter climb. I was on the front row, from finishing in the top 3 the night before. On Friday night, the start order was by USAC National Ranking, I was called up first. I don’t even know what to think about that. Maybe, eventually, the ranking will reflect abilities and that will be the norm in all local and regional events. Anyway, I got a shitty start. I pulled my foot out of my pedal and got buried. Not super buried, but up about up to my knees, maybe thighs. I was eventually back around 7th, but Joseph was still behind me.

That didn’t last long. Joseph made a big move up to the front about 1/2 lap in. I was still trying to get going. Eventually I was in 6th, about 10 seconds behind a front group of 5. I wasn’t too hurt, but didn’t think it was wise making the big move up to the front. I had my fingers crossed that by the time I got up to the front, that I’d still be racing for 1st. I finally attached myself to the back of the front, right when Joseph decided to leave. I wasn’t in position to go with him and probably didn’t have the juice. The next lap, Jake shelled us too. I was riding alone in 5th, sort of demoralized, but not really suffering.

I saw that Bryan Fawley was flailing ahead, so made an effort to get up him and another rider going for 3rd. I caught them and Bryan got shelled. So, I ended up riding the last 2/3 of the race with Chris Drummon, Villian CX. I don’t know if I was going faster or slower riding with Chris. I has no spunk, so it was nice getting a little rest every once in a while getting out of the wind. We were gaining a little on Jake for a few laps, but I knew I didn’t have any power to get up to either 2nd or 1st places.

In the meantime, Bryan got rejuvenated, and bridged the 20 seconds he lost, in about 1/2 a lap. I knew that Bryan was riding like shit for him, so I put in a fairly hard lap, right after he caught and he got shelled again. He got dropped, not by lack of physical ability, but mental. It is easily understandable. Racing cross in a slump is not enjoyable at all.

So, my race came down to the last lap. I was actually looking forward to the challenge. I think Chris was running out of juice a bit the last couple laps. I wasn’t too bad, but obviously not great. We made a couple lead changes and just when it was going to get interesting, Chris dropped his chain coming out of a corner. So, I rode to the finish alone. I would have rather gotten 4th in a error free finish than getting it handed to me by a mechanical. I was truly looking forward to the last minute and felt “cheated” we didn’t get to finish it just between us. So, 3rd again. Joseph pocketed $1000 for his win. Not bad.

If Joseph wouldn’t have showed up, there is a chance I could have won yesterday. Or maybe if I got a better start, but that is probably a stretch. I didn’t really have nearly enough to really race the race. I was more steady state.

We stayed and ate dinner with Joseph and his dad, Jerry, while they were giving out the awards. I had my fingers crossed that the van would be good. It is weird, but there wasn’t a problem at all. Those are the worst types of car problems. Or best depending on how you look at it. I just got the automatic transmission fluid changed at the Ford dealer. It takes gallons of the stuff and they have the machine that pumps all the fluid out of the torque convertor. I always hear that you’re maybe not supposed to flush the system on old transmissions, losening up the sediment. I don’t know. I do know that it seemed to run fine the 3 hours back to Topeka.

We had a crazy headwind all the way down to Tulsa and a cold front came through, so super headwind coming back. I talked to Brian Jensen on the way home, who came out of his two week cross retirement to race up in Lincoln this weekend. He got 2nd to Mark Savery yesterday. It was 70 in Tulsa and 30 in Lincoln. I was sort of kicking around driving up to Lincoln this morning, but that isn’t going to happen. If I felt just a little better, I’d do it for sure. I like racing bikes.

Here’s a video of some the race.

Rut N Guts2011 from Design Your Ideas on Vimeo. 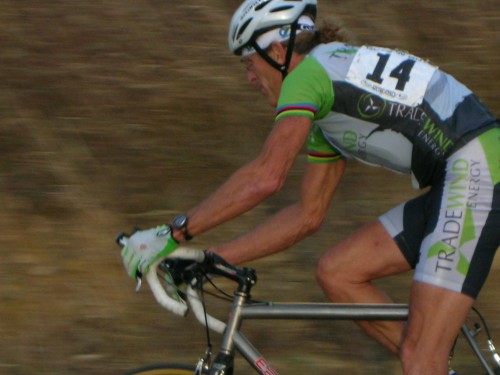 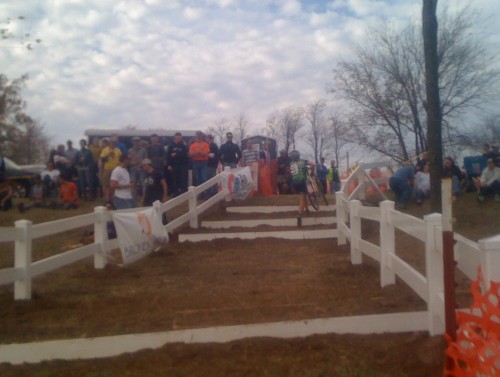 Catherine on the runup. 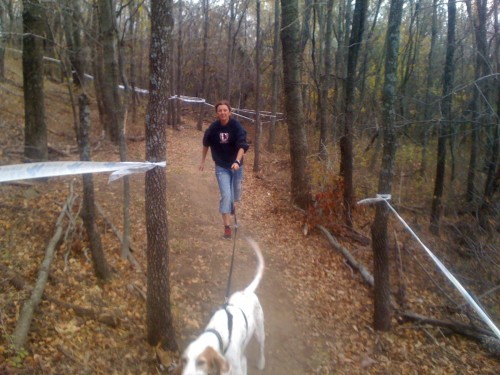 Trudi and Bromont running the course before the race. 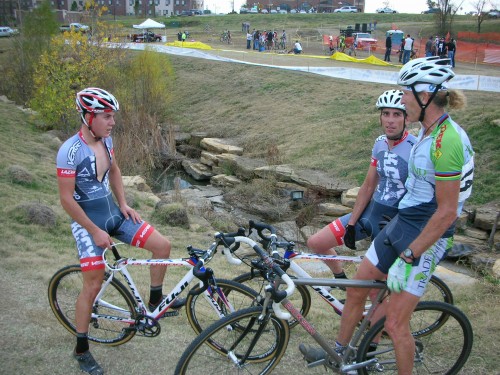 Joseph, Matt Ankey and myself talking after the race. 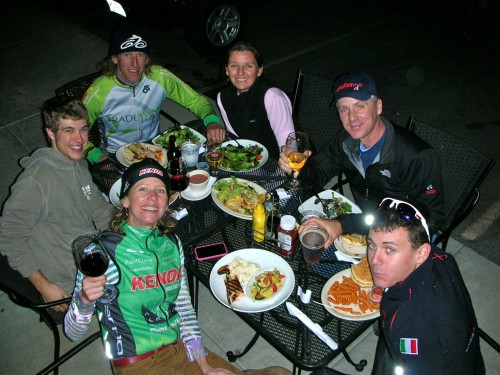 Dinner at awards. Catherine, Ben, me, Trudi Jerry Schmalz and Joseph. I was the only guy at the table, that raced, that didn't win.

One thought on “Ruts and Guts Cross – Broken Arrow, OK”