I’ve been not feeling that great the last week. I’m not sure if I got some funk flying back from California or what. Plus, I have a tooth ache that seems to be not getting better even though I went to the dentist a couple days ago.

I’m not really worrying too much about it like I normally would. It is still nearly 2 months before I want to be riding well, so I don’t mind being “down” now. The only problem is that I’m supposedly doing 5 cyclo-x races in the next 9 days and as we all know, it’s pretty hard to fake it in cyclo-x. And it’s pretty hard to get better technically in the sport when you’re redlined the whole race.

Training has been a chore the last week. I’ve been going through the motions, but not really training, just riding. Mainly on gravel, which breaks up the monotony.

I went down to Lawrence yesterday to meet up with my Tradewind Energy team guys and have dinner. That was fun, but I have a super headache today and only had two beers. I am such a lightweight. I must be allergic to something in it because I never feel good after drinking beer.

It was nearly 70 degrees here in Topeka yesterday and now the high today is going to be in the mid 40’s. It’s gonna seem cold. In Tulsa, over the weekend, it’s supposed to be in the upper 70’s. It is weird how that seems hot racing cross when just a few weeks ago it was nearly cool riding road bikes. The body is strange in that re-guard.

Anyway, I decided that I’m going to learn how to surf after all this cyclo-x silliness is over. I watched a couple surfing movies and decided it was about time I actually did it. I’ve spent lots of time in the ocean and have had tons of opportunities to surf, I just never did. I body surf nearly everytime I go to the ocean. I’ve always enjoyed it more and thought it was more physical and a better workout that actually surfing. Plus, all you need is a swimsuit. It is the same as I like to snorkel more than scuba dive, even though I’m licensed to dive. It seems more streamlined, less encumbered. Or cross county ski instead of downhill.

But, all that above aside, I’m going to learn how to surf. I’m not sure where. I’ll probably start somewhere in Southern California. Maybe not. Maybe Costa Rica. I have this friend, Greg Miller, that I used to race with who now owns a hotel on the beach in Costa Rica. Greg used to own a bike shop in Seal Beach, CA called Sand Piper and he finally came to the conclusion that it is nicer living in Costa Rica on the beach than in Seal Beach fixin’ bikes, so he pulled up roots and moved. He’s been trying to get me to come down to Costa Rica for a long time. His place in Costa Rica is also called Sand Piper and he is always posting photos of great breaks right from his place. And the water is warm there.

I don’t know anything about it really. I do know I’d like to have a new athletic challenge and relax some at the same time and surfing seems to fit both. I have no idea how long it will take to get proficient enough at it to be satisfied. Probably longer than I’ll be alive. 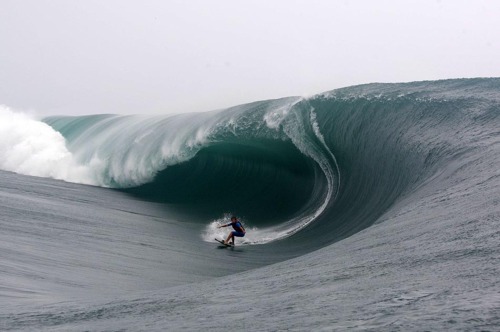 I saw this photo somewhere a couple months ago and it is what got me thinking about wanting to surf. I know I'll most likely never be able to experience something like this, but I can always hope.

14 thoughts on “Gonna Learn to Surf”