Yesterday was Bernard Hinault’s birthday. He is 57. Cyclingnews did a short article here celebrating a little of Bernard’s career. The name of the article was “Bernard Hinault: The greatest of them all?”

That was a nice thing for those guys to write. It really was. And I know that you have to come up with some kind of spin to try to get people to read your writings, but I’d personally have to disagree with the title.

Don’t get me wrong, Bernard Hinault was a very, very good/great cyclist. He did win 5 Tours and a multitude of other races, about anything he wanted to win if he put his mind to it. But to imply that he was the best cyclist of all ages, that would be a stretch.

I had the pleasure of racing with Hinault quite a few times over the years. Usually racing against him, but also as a team mate for a while. While I did witness some pretty great bike riding, I never personally saw him do anything that was super human, something that I couldn’t have done on my very, very best day.

I don’t have the knowledge to be able to compare riders from different eras of the sport. But, I can compare riders that were from the same era and Greg Lemond was a far superior natural. I know his results don’t outshine Hinault’s, but when I had the opportunity to observe, Greg’s feats were off the charts incredible. I saw Greg do many things on a bicycle that I thought were impossible. Sometimes when Hinault was in the race, sometimes not. Given, I’ve had to opportunity to race with Greg many more times than Hinault, thus having much more opportunity to watch Greg do his thing, but I’ll still have to stick with my belief.

I honestly think that Hinault would not have stopped racing at such an early age, 32, if Greg Lemond would not have come into the sport. Hinault saw, first hand, how great Greg was and saw the writing on the wall. I don’t blame him.

Anyway, I feel fortunate and honored to have been able to race bikes with both of those guys. They both showed me a much higher ceiling than I could have imagined on my own. Something to try to aspire to, even though most it of it was way beyond me. 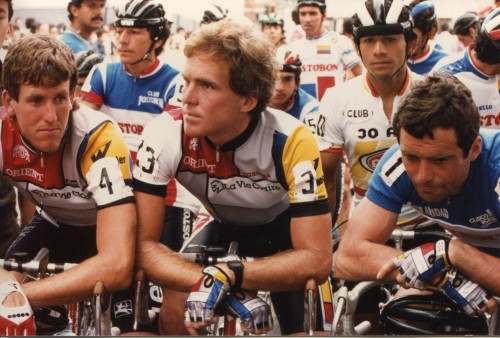 Me, Thurlow Rogers and Hinault before the start of the 2nd to last day of the RCN in Columbia. Boy, don't we look happy? We'd all crashed a bunch and were just trying to get to the finish. 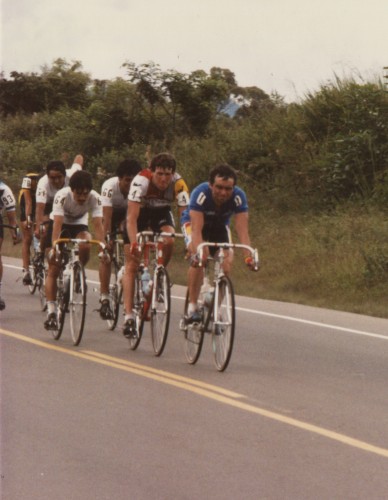 Bernard pulling with me sitting. We're not off the front here, but just the opposite. 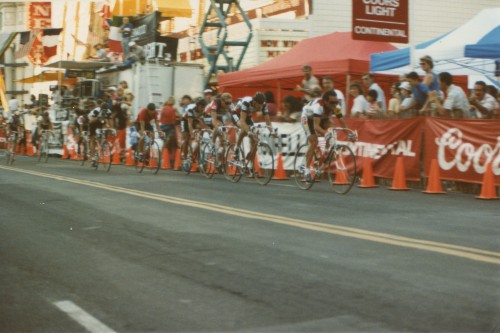 Hinault in the Reno Criterium in the Coor's race, me in 2nd. He wasn't a big fan of crits. Here he pulled the first 5-10 laps continually, super fast, 30+mph. I won close to $1000 in primes because of his method of staying out of trouble. 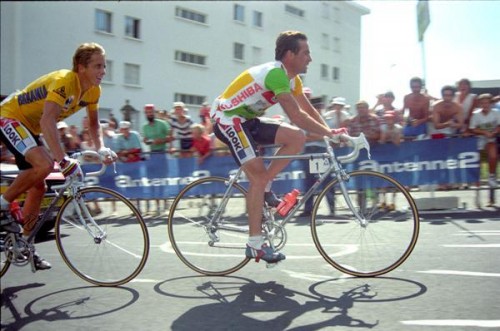 Lemond and Hinault in their last Tour together. 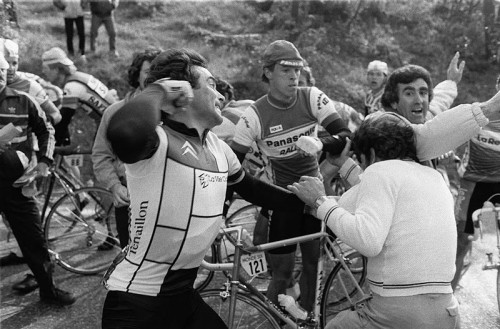 And I'd go with Bernie to take Greg in a fisticuff for sure.