It’s pretty hilly around San Diego. I haven’t ridden inland to the real climbs, but just riding in North County and then back up Mt. Soladad constitutes climbing in my book.

I’ve never been a great climber. Some days I had my moments, but in general I was just mediocre. I climb steeper hills much better than I climb long, drawn out climbs. I never much liked a typical Colorado climb that went on forever at 6%. That is probably why I always did better in Europe where the climbs had switchbacks and seemed to be at a steeper grade.

Even better for me are the climbs in England or Southern Belgium. Those climbs are super steep, but pretty short, usually less than a couple kms. Climbs like Snake Alley, in Burlington Iowa and on the Stillwater Criterium, in Nature Valley are good climbs for me. Super short and pretty steep.

I’ve ridden up, and down, the World’s Steepest street. It is in Dunedin, New Zealand. It is pretty steep, but short. Just like I like. It is nearly scarier going down the thing because it ends at a T intersection of a busy street and it is pretty hard to scrub your speed enough to stop if you’ve went down it full speed.

It is kind of funny, but you can instantly tell how seasoned a rider is by watching them climb. Especially the first time you see them get off their seat and stand. Standing on a bike is 2nd nature to most of us, but there must be something a little intrinsically difficult to attain, because unless you’ve paid your dues on the saddle, the proper climbing technique never is there. A smooth transition between being seated and standing must be harder than it seems.

It always amazes me how many people don’t pull correctly on the bars, transferring their upper body power down to their cranks. I climb off my seat a lot. Climbing up Mt. Soladad yesterday, I noticed that I seem to be almost pushing my bars back the other direction as much as I’m pulling up on the opposite brake lever on the power stroke. I don’t think I used to do this. It sort of bothered me, since I don’t change my riding style unless something needs to be addressed. I messed around with it most of the 2 miles up the hill. It does seem to be easier helping the rock of the bars. I’m probably not explaining it right here, and I haven’t really figured it out completely, so maybe I’ll just stop trying now until I get it.

I still use bar ends on my MTB bike. I can’t understand how you can climb properly off your seat on a MTB with your hands on the bars. It seems to me that you’re taking a lot of your arm muscles completely out of the equation. Climbing on bar ends is pretty much the same as climbing on your brake levers. And climbing without them seems to me to be more like climbing on the top of your bars. It would nearly be impossible climbing in that position, off your seat, on a road bike.

I guess I’m going out today and try to figure out my “new” climbing technique. Maybe I’ve always done it and just forgot. That seems to be happening more and more nowadays. Or maybe I’ve figured out something that makes me more efficient on the bike. That is what is super cool about the sport. Small tweaks is all it takes sometimes to get a lot better. 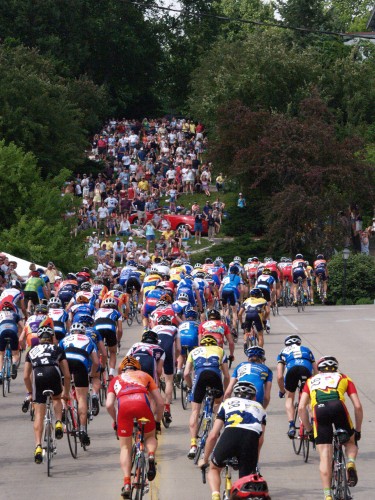 Snake Alley is one of my favorite races of the year. 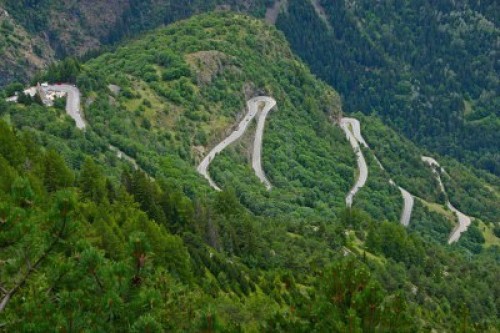 Alpe d'Huez is probably the most famous climb in the world for switchbacks. 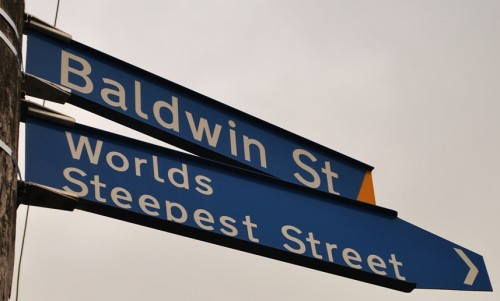 I saw this video at INRNG. I especially like about a minute in when the guy is running and his rear wheel falls off.

As of October 31st, the official count of humans on the planet is over 7 billion. That is a lot of people, no matter how you cut it. If you click the previous link, you can see what the population was during the year you were born. There were less than 3 billion the year I was born. 2 billion in 1922. It is pretty incredible thinking that the planets population has over doubled during my lifetime.

I ride bikes pretty quickly sometimes. But, I’m not under any illusion that I’m that special/unique of a person. I’ve often said, that if every human on this planet trained to ride/race bicycles, I wouldn’t be in the top 100 million. That is a fact for sure.

So next time you think you’re so special, remember that there are 6,999,999,999 more people on the planet and a bunch of them out there possess some pretty unbelievable talents, but they just don’t have the opportunities, that we have, to expand upon them.

We won the lottery being born into a First World country, with opportunities galore. Let’s remember that when we make decisions that affect the less fortunate.

I’m heading up to LA for the Nike Nosco benefit ride for Ronette Espinoza on Thursday. Click here if you’re interesting in donating.

Last night I drove up to Camarillo CA with Don and Sue to meet up with Jimmy Mac (editor MTB Action), Andy Hampsten (Andy Hampsten) and Scott Nichol, (Ibis) to eat dinner before the Ride for Ronette today.

Yesterday I did more of a tourist ride around La Jolla, trying to get everything in my mind organized for the next few days. I had been trying to get a hold of Wayne Stetina from Shimano, but hadn’t heard back. Then I get this text from Wayne saying that he is in a hospital in Florida after a crazy bad crash. He has a collapsed lung, broken ribs, collarbone and a few other problems. I never remember Wayne getting too hurt while he raced. I guess if you spend enough time riding, eventually it catches up with you. Anyway, I hope he gets better quickly.

So, today we’re all doing a 80 mile ride through the canyons around here. I did it last year and it was great. I haven’t seen Roy Knickman since the Coor’s reunion and am looking forward to riding with him some tomorrow. Along with a ton of others.

Okay. The weather is crazy all over the country. Snowing on the East coast, now snowing in Kansas, and a Santa Ana here in Southern California. The wind was blowing over 60 mph around here some yesterday. Today it’s supposed to be calmer. Last year it was over 100 degrees in the canyons. Today not even 70. I guess it’s that time of the year. Okay. Better get going.

I have to mention Todd Wells result down in Costa Rica yesterday. Winning stage one by over 10 minutes. Should be an interesting few days for him I’d think. 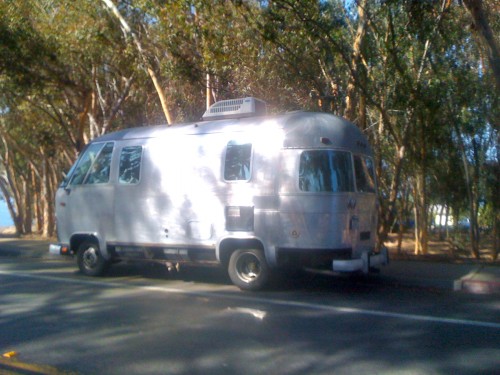 I've seen this guy for the past few days parked at the top of La Jolla Shores. I don't have any idea the make of this. 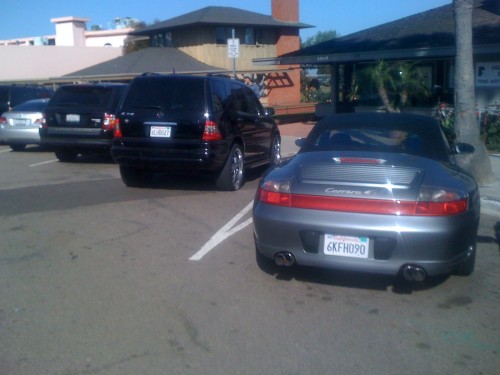 There is no place in the world that has automobiles like Southern California. This photo is from La Jolla this morning. A Porsche, then Mercedes, then Land Rover and finally a Lexus. This was nothing special. I could have taken this photo at about any place down there. 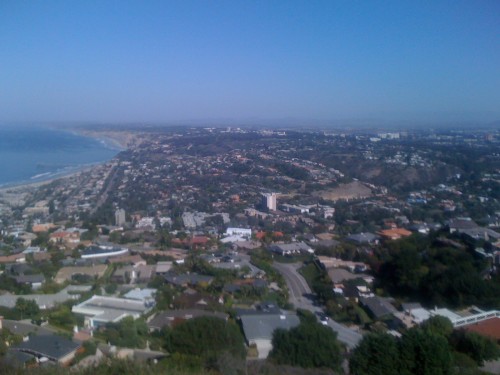 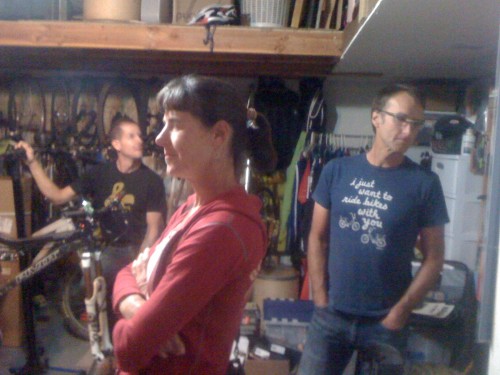 Yesterday I rode 80 miles in the canyons outside Malibu with a bunch of friends. Some I see pretty often, but more that I hardly ever see. I could go into minute detail about how it was a great ride and how much fun I had, but I think I’ll skip that.

What stuck with me the most was how strangely nice it is having these friends that you don’t ever see around and being able to pick up conversations just like you were riding together yesterday. I’ll use Mike Kloser as an example. I haven’t seen Mike for years. Probably over 5 and maybe closer to 10. I rode the last 2 hours of the ride with him and it was great. Of course, I’ve been following what Mike’s been doing since he retired from MTB racing, but we didn’t go into that much. (If you want to see a crazy impressive resume, just click on his name.) We just talked about normal stuff, the ride last year, his son’s MTB racing, etc.

I didn’t hang out with Mike too much when we raced together. The first year I raced MTB bikes, he showed me the ropes of how to change all your cables after every race and how to prepared your equipment properly. But, after that we just raced. But, since we shared so many of the same experiences, it seems like we are sort of “bonded” by that. Maybe that isn’t exactly the correct word, but it seems right now.

Anyway, this ride had a bunch of those guys on it. People that have been riding their bikes for most of their lives and still appreciate it nearly as much now as they did when they competed full time. Those are my people and I truly appreciate it more than I knew. Strange.

Here is the day in pictures- 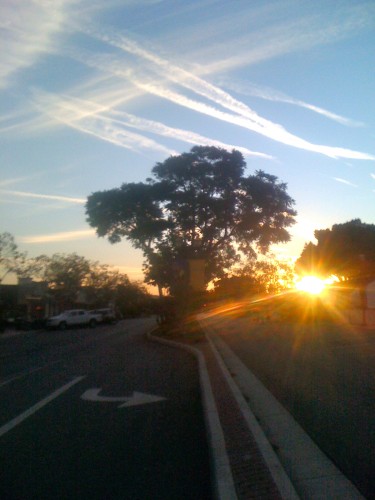 Walking in downtown Camarillo at sunrise to get breakfast. 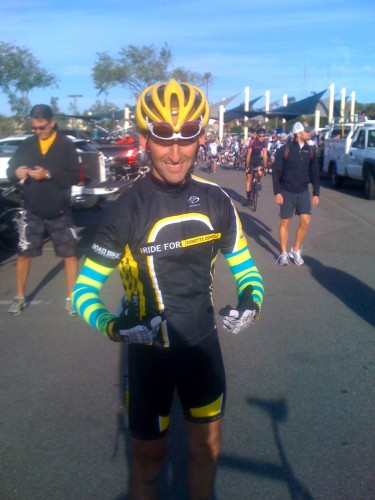 Running into Zap nearly first thing when I got to the ride. The ride was a benefit for him and his family. 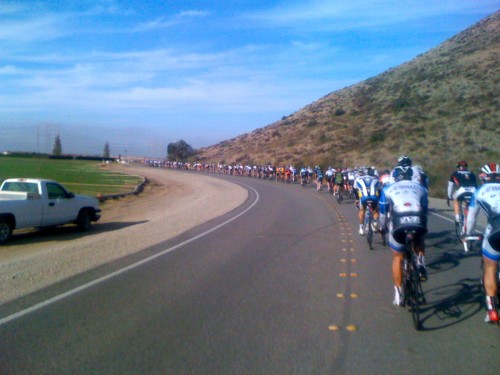 I think there were close to 600 people riding. 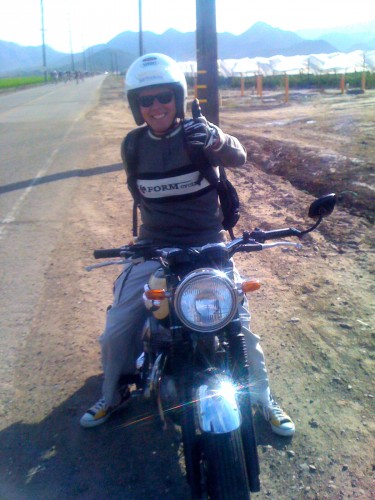 Jimmy Mac following the ride on his motorcycle. 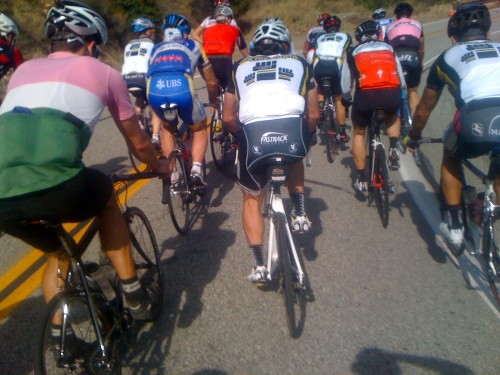 Trivia ? of the day. Name the five riders in this picture that have been my team mates on the Raleigh Team. 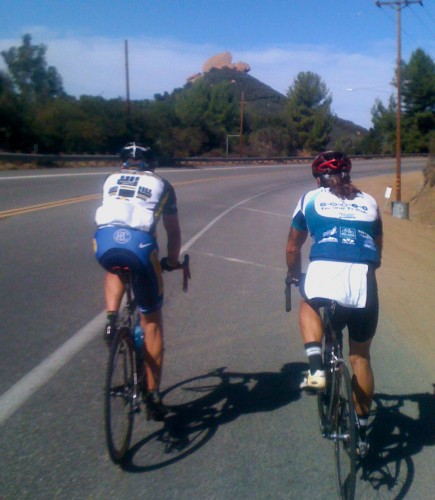 I rode the last 40 miles in a small group with Mike Kloser, left, and Don Sutton, right. 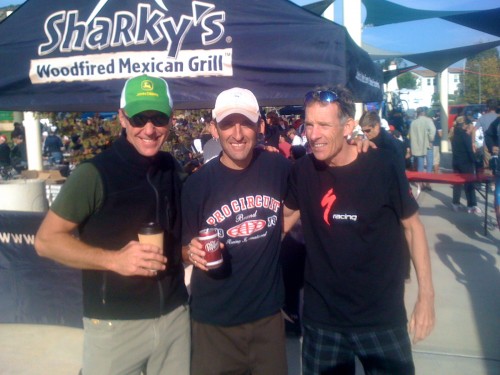 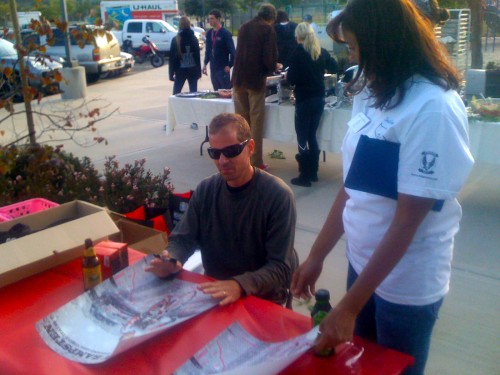 Andy signing posters when the ride was over.

A couple people sent me this yesterday and I was planning on putting it on this afternoon. But, Jim beat me to it on my comments of yesterdays ride, so here it is. It is amazing.

I think yesterday might of been the first day I’ve ever traveled to Southern California and haven’t ridden. It pretty much rained the whole day. I was planning on riding still, even if it was just raining, but by the time we drove from Jimmy Mac’s down to La Jolla, the weather turned pretty bad. I got dressed to go ride, but didn’t even make it down the hill before turning around. These guys say that there are never thunderstorms here, but there was definitely thunder and lightening. Plus, it was coldish, in the lower 50’s.

We stopped in Beverly Hills on Melrose Avenue to walk around a little on the way back. That district is something that you’ll not find anywhere else on this planet. The building, the people and the clothing are all beyond unique. It is kind of bohemian with a California twist. Super interesting, but just for a little bit.

We were going to go by the Getty Museum, but with the rain coming down in sheets, we figured our stop would just get us stuck in LA traffic for hours, so we baled. I’ve been there before, so it wasn’t such a loss.

I feel kind of iffy right now riding, so maybe the day off was okay. There is a cyclocross in Longbeach tomorrow. Maybe, with all the rain, it won’t be so dusty. Don and Sue are trying to get me up to the mountains to Idyllwild, where they have a mountain house. I guess we’re going to ride here this morning and try to figure out the rest of the weekend later. No rain today, the sky is clear. It should be a zoo on the coast. Not from tourists, but from cyclists, which is always good. 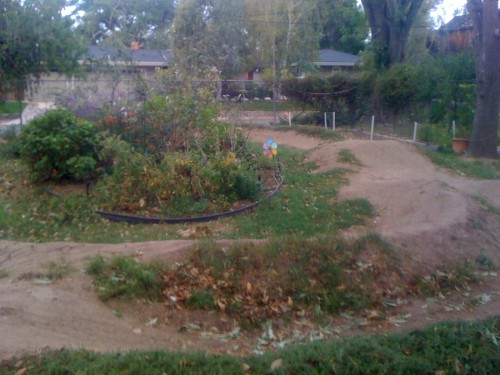 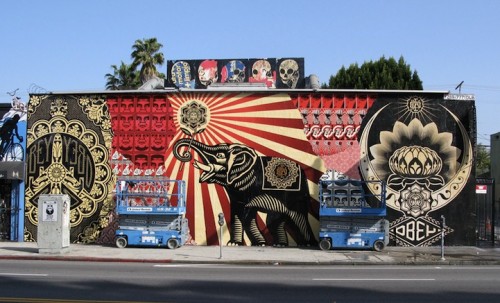 The buildings on Melrose Avenue are over the top. It was a pretty big change from hanging out in the morning at Jimmy Mac's rural abode. 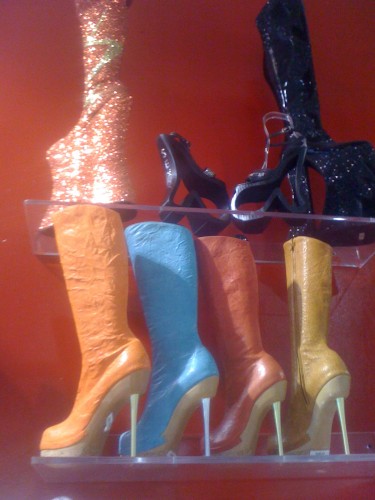 The shoe stores are everywhere with most of the shoes looking somewhat like this. 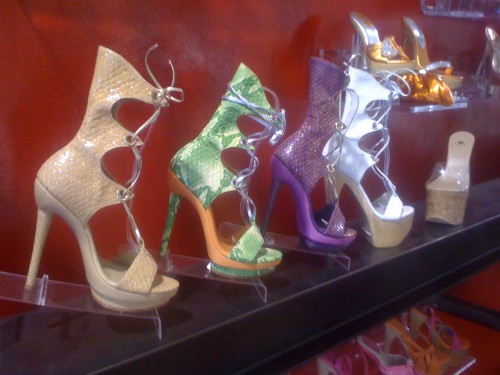