Yesterday I thought I should maybe do some “training” for the Berryman Epic, 60 mile MTB race, this Saturday. So I decided to go out and ride 5 hours on my MTB, throwing in a hour of rocky singletrack in the middle. It didn’t do much for my psychic. I’ve been trying to locate a 29’r fork for my rigid Eriksen, but haven’t had much luck yet. So, I was fully rigid and the rocks were not my friends. I’m not bleeding too much, though, I was like a pinball most of the time. Bill has a new Felt and was riding much smoother than me. He had pretty low pressure in 2.25 tires and was lovin’ it. If I don’t hear anything positive about the fork soon, I’m going to put my YBB back together and ride it. Berryman is pretty rocky and, like I said about, rocks and I aren’t getting along that great now.

While we were heading over to Clinton yesterday, a huge group of turkeys crossed the gravel road ahead of us. I was trying to figure out what a hoard of turkeys was called. I couldn’t come up with it. I think it is so weird that we have different words for groups of different animals. And we have different words for different kinds of the same types of animals. I usually think of a group of birds as a flock. Oh, how wrong I can be. Here are some examples for various sources.

A group of turkeys is called a rafter, although a gang is also an acceptable name. They have also alternately been called a gobble, although this definition is colloquial and does not appear in dictionaries.

A group of ducks is called a badelynge, bunch, brace, flock, paddling, raft or team. Also, one might call it a dover of ducks. (If it’s a group of ducklings (i.e., they’ve recently hatched and are being looked after by their mother), it is called a brood.)

A group of hawks is called a cast, aerie or kettle. (The only hawk you are likely to find in groups is the Harris and it is found in Arizona and Texas.)

Then I found this. It is baffling.

A group of birds is called a fleet, flock, flight, congregation, parcel, pod, volery or dissimulation (small birds only). A bevy of quail A bouquet of pheasants [when flushed] A brood of hens A building of rooks A cast of hawks [or falcons] A charm of finches A colony of penguins A company of parrots A congregation of plovers A cover of coots A covey of partridges [or grouse or ptarmigans] A deceit of lapwings A descent of woodpeckers A dissimulation of birds A dole of doves An exaltation of larks A fall of woodcocks A flight of swallows [or doves, goshawks, or cormorants] A gaggle of geese [wild or domesticated] A host of sparrows A kettle of hawks [riding a thermal] A murmuration of starlings A murder of crows A muster of storks A nye of pheasants [on the ground] An ostentation of peacocks A paddling of ducks [on the water] A parliament of owls A party of jays A peep of chickens A pitying of turtledoves A raft of ducks A rafter of turkeys A siege of herons A skein of geese [in flight] A sord of mallards A spring of teal A tidings of magpies A trip of dotterel An unkindness of ravens A watch of nightingales A wedge of swans [or geese, flying in a “V”] A wisp of snipe.

Wow, would you ever have’d guessed? I particularly like the parliament of owls. I think I’ll just use any adjective that I come up with at the time I spot them.

I did an interview with SkinnySki.com and it is posted today here. He could have picked a NORBA result without my absolute worse finish I ever had as a photo. I finished 5th the year before.

I can’t believe how sore my arms are from the cross races, then riding on rocks yesterday. Bill’s arms are sore too, as if that makes me feel better. Okay, I better get an attitude adjustment the next couple days or this weekend is going to be trying. 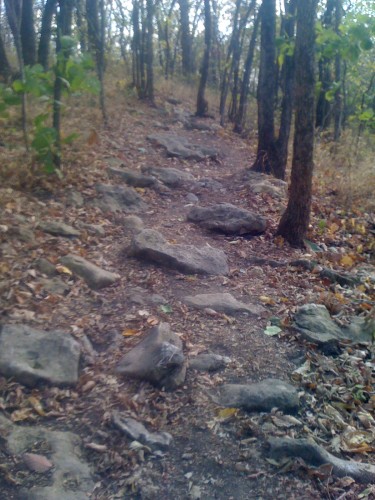 This is the white trail at Clinton Lake. This is the clear area. Most of the rocks were covered by deep leaves. 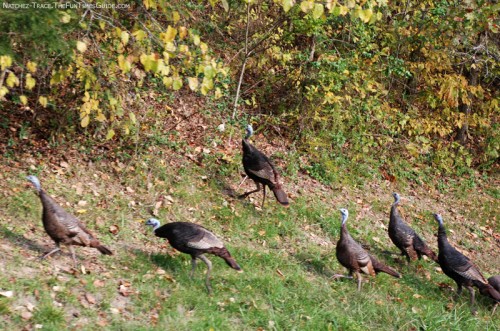 There are tons of wild turkeys in Eastern Kansas right now. 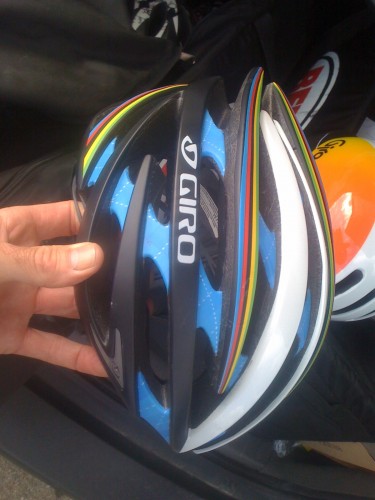 I was over at the local bikeshop, Capps, and ran into the Giro/Easton/Bell Sports, rep, Trevor Litten. He was showing me the new Giro helmets. Crazy light. But, did I end up with this new World's helmet. No. 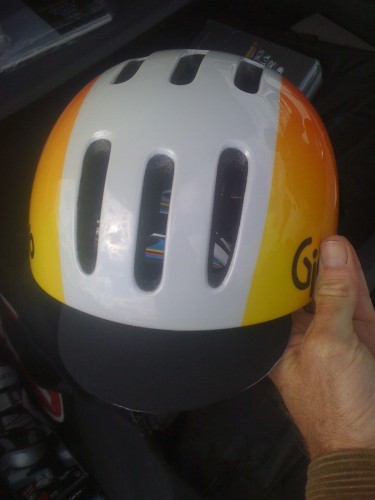 I have the retro Giro for Berryman.

2 thoughts on “Out of Sync”