Yesterday I decided to do one of my favorite rides and head over to Lawrence on gravel. I still had the tubeless setup going on my wheels, so it was easy. The river road between Topeka and Lawrence is my favorite ride here. I rode for over 70 miles and only two cars passed me.

I am still pretty tweaked from the cross race last Saturday. I think it is the sprinting/running in the sand. It is mainly my leg hamstring, which I’ve had problems with before and still need to address. Now is a good time to get in some nice riding and not worry too much about form. January is a long ways away.

It is great temperatures now in Kansas. It seems like it just turned to fall almost instantly. Last Sunday, there was just a hint of color in the trees. Then yesterday, I couldn’t believe how many leaves fell on the road between the time I was going to Lawrence and returning. It’s like they all decided to just eject at once.

I feel obligated to say something about Steve Jobs dying yesterday. I have a lot of Apple products and appreciated each and every one of them. He was definitely a visionary. When people share a passion for something, they feel connected, and that is usually a good thing. No matter what the motivate was, his products brought the people of this world closer together. He will be missed by many.

I have to decide about going out to Colorado in the next 24 hours. I’m not going to race in Ft. Collins for multiple reasons. I don’t think the the USGP should be holding a race weekend at altitude. It isn’t fair to most anyone. I wouldn’t race it anyway. But, I’d like to head up to Steamboat to hang with Kent and Katie for a while and get my cross bikes all situated. Fort Collins is on the way.

Okay, I think I’m going to just duplicate my ride of yesterday once again. It is my favorite rides here, so why not. 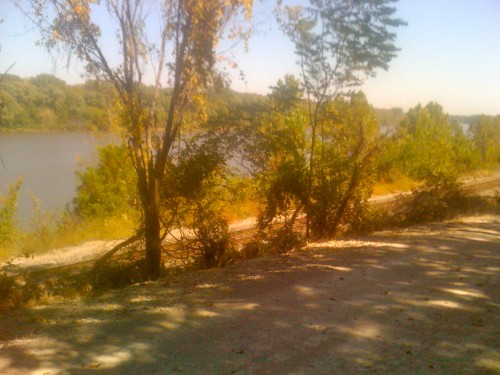 Most of the ride is along the Kansas River. 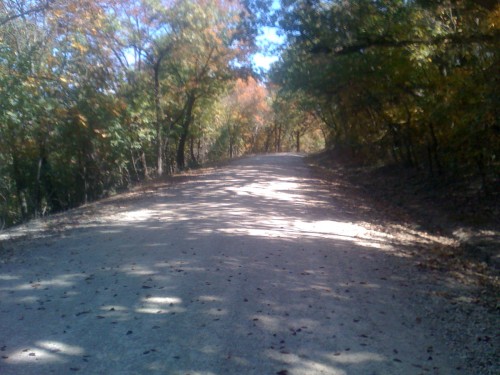 This road was nearly covered with leaves on the return. 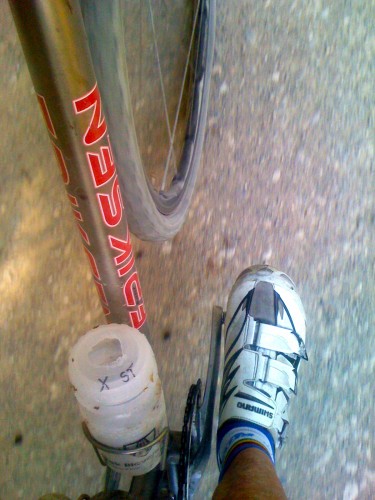 My bottle ejected on a wash board descent and this was the result. I've tossed a million bottles and am pretty sure I've never broken one. 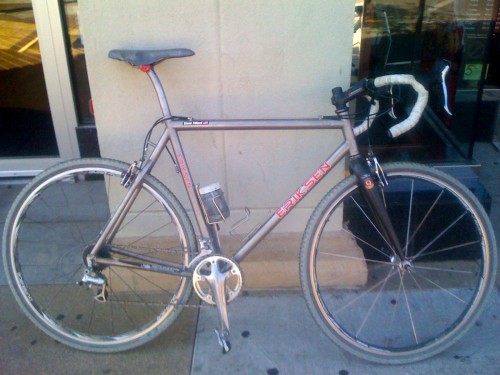 Titanium is the perfect material for cyclo-x and MTB bikes. This isn't my normal saddle, but the whole scheme kind of matches with the gray Bulldogs.

And, here is an ad from Apple. The Lisa didn’t last long. But, the ad has bikes and dogs in it, two of my favorite things. Kevin is carrying his bike, just okay, but could use some ‘cross instruction.