Fences have their places in society, but in general, I don’t like them much. I was thinking about riding my bike and playing when I was a kid and came to the conclusion that fences have really hindered a kids ability to play effectively.

When I was a kid there were hardly any fences on any yards. It was a super way to take a shortcut across a block. Of course there were a couple houses that were off-limits, mainly because the occupants were a grouchy old couple or something like that, but we still cut through sometimes. I think it is difficult to play many of the nighttime games that children play when you only have front yards and the street as a playing field.

We started getting fences here in Topeka when the city started enforcing the leash law on dogs. It was a boom for chain link fence companies. Everyone put it a 4 foot chain link fence. That wasn’t too much of a problem for most of us. We could get over a 4 foot chain link fence without hardly braking a stride. I guess we figured since those were our normal right-of-ways, we were grandfathered in, thus we just jumped them at will. But the kids that came along after me probably didn’t feel comfortable going into someones backyard, so eventually the fences did their jobs and delineated the property line. Now all the fences seem to be wooden and are for privacy too. Neighbors are strangers now.

Now we, as a country are trying to decide if we should try to fence our whole country in. I don’t know the situation of our fence on the Mexican border. It seemed like a stupid idea at the time and even seems more stupid now. But then I read this article about thinking about building a fence along the Canadian border. I guess we are already flying two drone airplanes along the border spying and hindering all the bad guys from crossing into the US from Canadian. At least the drones are unarmed as of now. But when they say that they are thinking about building a fence along the border, I have to call stupid. Worse than stupid, insane. Fences didn’t work for me as a kid and surely won’t do a thing to keep “enemies” out of our country. Especially all those Canadians!

I’ve ran into a few experiences where fencing has been used to try to segregate bike racing from the spectators. One time we showed up to the Fatboy Criterium in Scottsdale and the fencing company had encircled nearly the whole course with 8 foot chain link fence. It was horrible. People with their faces pressed up to the fence, hardly seeing any of the race. The riders called it the roller dome. And the Rock Island Criterium had the same idea, but they bought the fencing. They tried to use a 6 foot, welded wire fence for years. All it did was drive the spectators away.

So, in summary, I think fences are pretty good for one thing: keeping our pets and other animals in a confined area. They are lousy for keeping people in or out. I’d just as well not have them around. 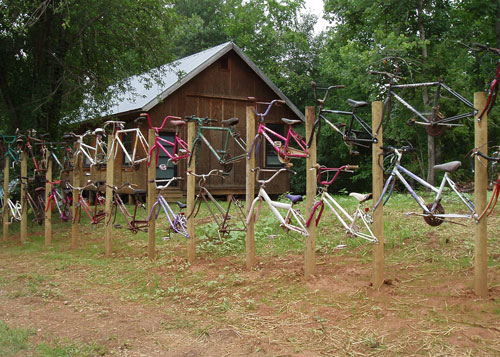 I'm all about art, but I don't even like this fence much. 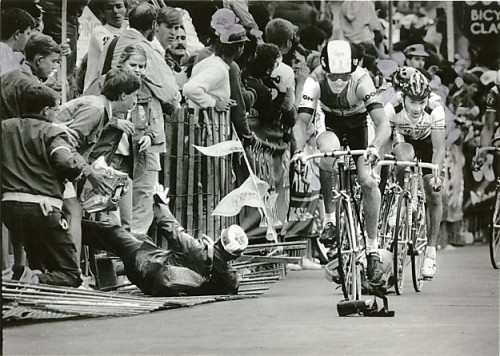 Snow fencing should only be used for snow, not for people. I wonder if Alan hit the camera here.