When I was a kid, I used to ride my bike with my brother. I had a blue Schwinn Stingray and I’d sit on the handlebars, facing backwards, and Kris would sit on the seat and steer. We’d both pedal, with me pedaling backwards and Kris pedaling forward with his feet on top of my feet. It was amazing to us how fast we could get going with both of us pedaling.

We started wandering way past the boundaries set by our parents. We eventually got all the way to the Kansas River, that splits the city North and South. We eventually found a park, a couple miles from our house, where some kids had built a make shift BMX track. I don’t think there were banked corners, but it had lumps in it and was all dirt, with no grass.

We never spent too much time at the track. It was the fall and during school. By the time we got down there and each of us rode a few laps, we had to head back home before it got dark. No one said a thing about kids making a bike track in the park. We didn’t think a thing of it, except that it was super cool.

I went by that same park yesterday. I was pleasantly surprised that there were a few kids hanging there. But all were really young, with at least one adult for each kid. But, the bike track has been gone for decades. It is just flat, boring grass now.

I was thinking how strange it is that there is no chance that a bunch of kids could get together and “build” a BMX track in the middle of a city park now. I got called into talk to the Topeka Parks Department Head a few years ago, for mowing a mile loop in a park by my house. He threatened to arrest me for mowing the grass down to the level that the city was supposed to keep it at. I explained we were having a race there the next weekend and that 8 inch grass didn’t work, but he was adamant on his stance, since he’d received a nasty call from a County Commissioner that lived on the park.

Anyway, it all seems wrong. Why not have a bunch of kids on their bikes riding around in the grass in a little used park. It is what we all call cyclo-x, but for them it would just be fun. Sometimes I wish that Americans today had a closer mindset to Americans of old. “If it doesn’t hurt anything, then why not?” was the logic my parents and the parents of most of my friends used. Most of the best experiences I had with I was young didn’t involve any adults at all. Why not let our kids get together to invent and build some stuff on their own. It couldn’t hurt. 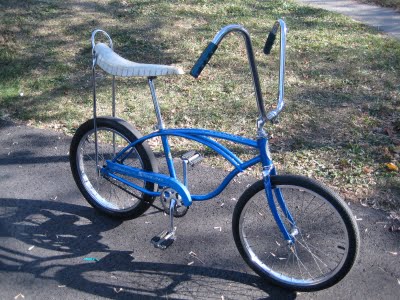 This is nearly the exact bike I had when I was young.

15 thoughts on “Bike Riding of Old”