I went to Kansas City yesterday and raced the Boss Cross. It is a long standing series that Jeremy Haynes has been promoting for the last dozen years at least. It used to be in small parks throughout the downtown KC area, but recently has moved into more “cross type” venues. I think I liked the urban crosses better, but now there are over 200 guys racing, so that doesn’t work out so well.

I didn’t decide to go to the race until nearly it was time to leave. I picked up Bill, then Brian and made our way, the hour, over to KC. The course was pretty good. It had a good mix of technical corners and riding sections, but it was pretty bumpy. And there were two sand runs that were way too long. Maybe 25 meters each, with no chance of riding any of it either way.

I won the race. I never really got going, but I never wasn’t going either. I was following Andrew Coe most of the first lap. We had a small gap on the rest of the field. Andrew screwed up riding this steep hill that was loose and I took over. I never felt like I had a big ability to punch it, but was more just dieseling around. The ground was rock hard, so it was pretty hard getting the right pressure down. I ended up with something like 27 psi front and rear. I never really folded my tires over, so maybe I could have went a little lowere.

My back started seizing up with about 15 minutes to go. I was running into lapped riders continually by then, so I was having to keep my head up. It seemed like I was lapping big groups always at the wrong spot. It didn’t really matter, I had a pretty good cushion and even when I was having bad laps, I wasn’t losing any time.

Anyway, I have a hard time figuring this sport out. It is super hard, as we all know. I don’t understand why I can do two cross races last weekend in Madison, and have no lower back issues and then this fairly flat race and be toast. Maybe it was the 22 running sand sections. It was slow as hell and painful. Plus, I don’t get how I got fairly smeared by two minutes, by two of these guys in St. Louis, John Schottler and Josh Johnson, both from Big Shark, and then beat them here when I felt like I was riding much worse. Even Andrew Coe’s time in St. Louis was a couple minutes faster than mine. Go figure.

So, I’m getting up in 5 and a half hours and am driving over to Lawrence to ride an 100 mile gravel road ride with a bunch of guys. It is sort of organized. And it has sort of become an annual tradition. It looks to be a pretty nice fall day with the high approaching 85. That is going to seem pretty hot. I could go to the Boss Cross #2, at the same venue, but the gravel road ride is just plain fun. Plus, I can probably use the miles. I’m not sure which one my back would approve of more. I guess I’ll see in a few hours. 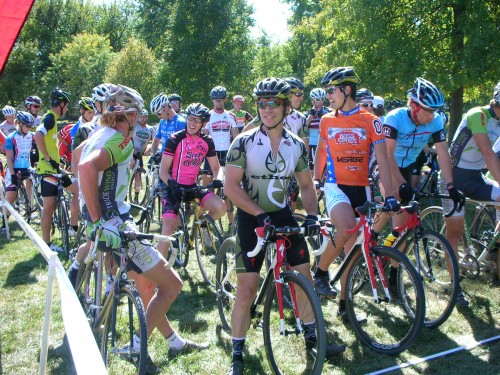 The starts here in Kansas are pretty casual. 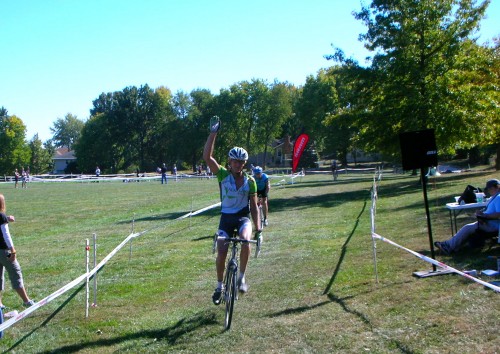 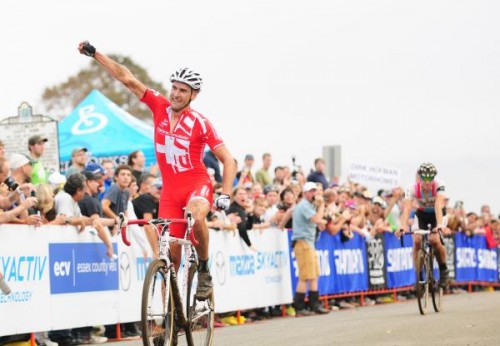 Christian Heule outsprinting Jeromy Powers today in Glouchester. I guess the one armed victory salute was in vogue today. Man, does that guy have some pretty great muscles in his right arm. 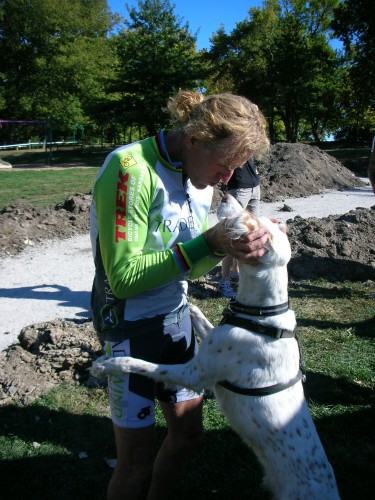 Bromont happy to see me after the race. 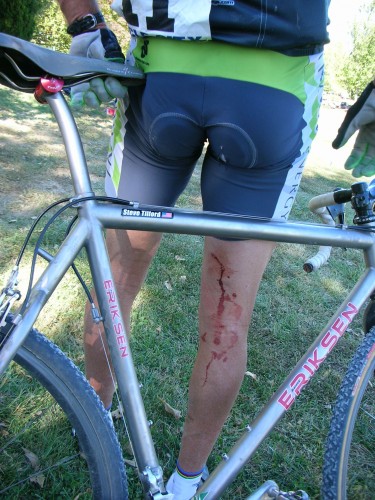 I have a pretty good puncture wound in the back of my leg here. I don't quite remember when it happened though. That is kind of weird.

Notice my number, 11. Couldn’t lose the race with that number. 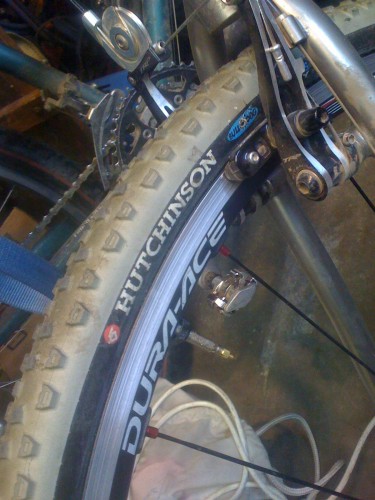 I mounted some Hutchingson Bulldog tubeless tires on my Shimano wheels for the gravel road ride tomorrow. They should be the ticket to avoid mutiple flatting. We'll see.

7 thoughts on “1st Cross Win of the Season”