Like I said in last night’s post, Chequamegon went pretty well yesterday. I’m not big on the final place, but it was about the place I deserved.

I guess I should do a play by play, but it only goes to about the first half before I got shelled.

What amazes me about this race is the quantity of riders. They are everywhere. 3000. I feel a lot less pressure after watching everyone else being so nervous when they have number plates in the 2000’s, meaning that they have no chance of having low places. They can definitely have a good race, but their placing won’t reflect that most likely. Starting that far back in a MTB race makes for a lot of not going forward in a lot of places.

Anyway, the race started out super fast. When the race turned onto 77 and the neutral section was over, I was on one of the quads. Historically, I hate it when riders sit on the quads and disappear up the road. It is wrong. That being said, I was on one of the quad when they took off. I was just ready to sit up, but Doug Swanson was on the only one and was riding away. And then Cole House came over and was sitting on mine. I didn’t feel comfortable letting either one of those guys ride away at the start, so I stayed on Cole. Eventually the quads gunned it and left us 300 meters up the road. Doug didn’t pull, and Cole got back on the quad and rode away again. I hit the field completely gassed, but maybe not as gassed as Doug and Cole. I made it maybe a mile before Jason McCartney pulled a long line of guys up to us.

I slotted in behind Jason and he pretty much never pulled off the rest of the race. It was super fast. Eventually it got down to 10 or 11 of us. I felt pretty good. I recovered pretty well from my no so well thought out start and wasn’t feeling to bad on the rolling birkie sections.

Right before OO is when I started having problems. I got too far back in line and that is not a good thing. There is a huge slinky effect when Jason was over the top of the hill and I was still climbing up the previous side. It turns the race into a continuous interval session. I saw it happening, but it was out of my control. I wasn’t going to bump someone in the top 3 back, so the writing was on the wall. I’m not sure I tried as hard as I could have to stay on. That would be my only regret. I wasn’t that gassed when I was finally popped. And I got popped only one hill from where I could have sat on Jason and VDV for the next hour as they motored on gravel roads.

I lost nearly 4 minutes riding by myself the next hour. Not surprising considering I was doing an individual TT against a team TT of 2 Pro Tour riders. There was no one in sight in front and or in back of me the whole time. Eventually I came back to Cole who got shelled after me. Heading up the high point, a group of 5 or six guys caught up. I couldn’t really understand it, but afterward I was talking to Brian Jensen and that whole group was sitting on the Eppen’s tandem and they were motoring on the gravel. They were going pretty much the same speed as the front group, since I was 4 minutes back from the front and they were 4 minutes back on me an hour earlier. I sure could have used someone to draft since it was extremely windy.

My little group hit the last Birkie section together. I was feeling pretty okay having downed a flask of strong espresso a few minutes earlier. This U23 rider, Jack Hinkens had come back after getting shelled out of the front group just a bit before I did. I introduced myself to him earlier in the race while I was dropping back on a road checking out the carnage. I’ve been watching Jack’s progression since he and his BMC team mate finished 1st and 2nd in the U23 National Cross Country Championships. Jack seemed pretty motivated and was pushing the pace on the last hard Birkie section. I was fine. Jacks pace was not stressing me much, but I was a little disinterested in the race since the race was up the road.

After a couple hills, Jack turned around and saw that we were all there still and said F#%@ and swung off. I just took over and pulled the rest of the section. When we hit the road at the end of the Birkie section, there is a large puddle 50 meters after the turn. I rode through the puddle and my group took the ride around and I never saw them again. I didn’t do anything different. I just kept riding. I think those guys were just tired. I looked back a couple time in the Telemark trails, but never saw anyone. It is nice finishing a hard MTB without having to stress about sprinting/beating someone that is close. I guess Jack must have pushed it because he came in right after me in 8th, less than 20 seconds back.

I talked to Jason, Brian Matter and Christian after the race and got the scoop how it played out in the front group. I guess Jason just kept drilling it. Christian started pulling too eventually. Christian said that he was pulling on one of the gravel roads, Boedecker at 51kph and 550 watts. Shit. No wonder I lost 4 minutes in less than an hour. I was surprised I only lost 2 minutes the last 10 miles from the high point on.

Anyway, Brian said that Jason and VDV were double teaming him and eventually Christian got off the front. He was 15 seconds off the front when he had to turn a sharp turn on Camp 38. He flatted. So then there were only 3 left in the front. Jason, Michael Olheiser and Brian Matter. Entering Telemark, the race was over. Brian has won the race 3 times in Telemark. He is nearly unbeatable if he gets to that point. Jason cramped and Olheiser got gapped, but caught back on. He lead it out down the ski hill to the finish and Brian jumped him and won alone.

I thanked Brian for making my prediction look good. I picked him a couple days ago. I’m not sure what would have happened if Christian kept air in his tire. I asked him what happened and he said that he didn’t feel anything, it was flat. I asked him if he burped it and he kind of looked at me wondering and then said he had a tube. I questioned why he wasn’t riding tubeless and then he said maybe it was tubeless. I told him not knowing whether he was riding tubeless or with tubes disqualifies him from the chance of getting to win Chequamegon on his first try. He hadn’t paid his dues obviously.

So, the race is over. I put a lot of effort into trying to have a good result here. I can’t complain about my form. I think I had a mental fart when I shouldn’t have. I might have made it to the finish with those guys, but I’ll never know. I know I was a long ways back, but I rode the last 2/3 or the race in the wind by myself. I know I was riding much better at the end of the race than the start or middle of the race. I’ve always said I’d rather be riding good than finish good. But, that isn’t the case here. There is one place at this race for me. And Brian Matter has dominated that slot for the last few years. Plus, not being in front, denied me the chance to view the fireworks first hand, which is really interesting to me.

We chopped wood for 2 hours last night, drinking, of course. Then to the pizza place and to awards. I went to bed relatively early for me because I had it in the back of my mind I might race again today at Telemark. But it is raining pretty good. Matt Shiver wants to go ride singletrack, but we’re both fair weather riders in this case, so it might be an off day. Probably a long hike in the woods today.

Skinnyski has a ton of photos
from the race if you’re interested. 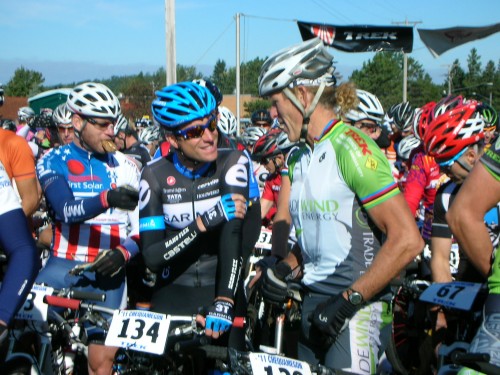 Doing a quick tutorial with VDV (Christian Vande Velde) before at the start line. 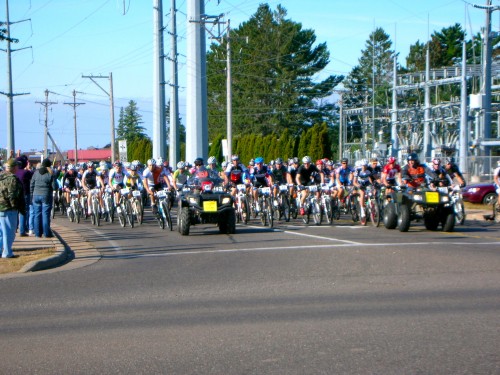 The last corner before 77 when the quads take off. 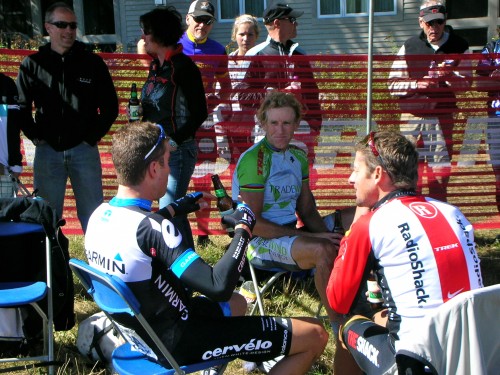 Afterward listening to the play by play of the race. Jason is losing out on the new RadioShack merger with Leopard. VDV has another year on his contract. 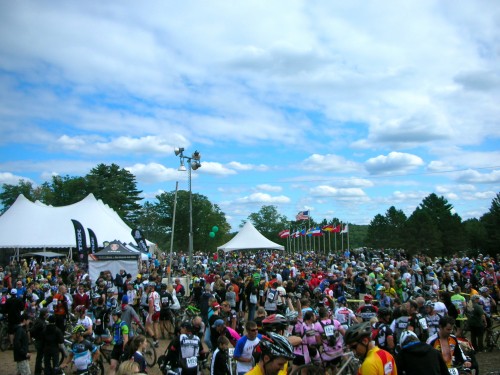 I took this photo when we were riding back to Dennis'. It is a great atmosphere. 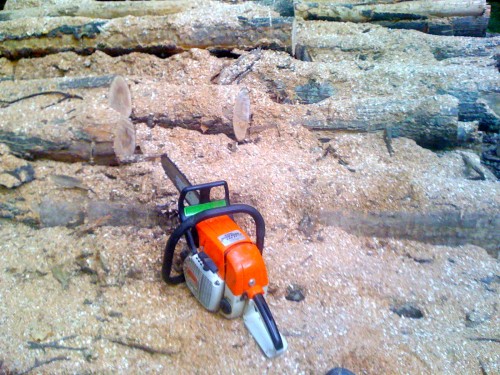 We made a pretty good dent into Dennis' wood pile. This is my view of the top of the pile. 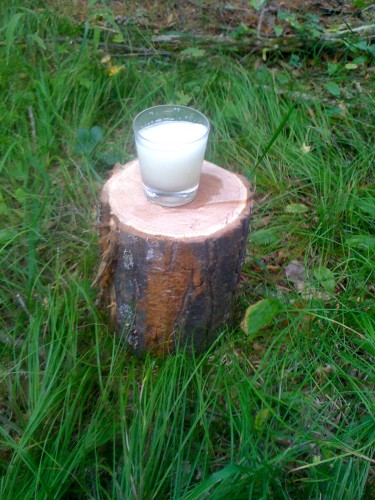 An artsy photo of my margarita glass. I put it away in the opening to protect it from saw dust and others looking for more liquor. 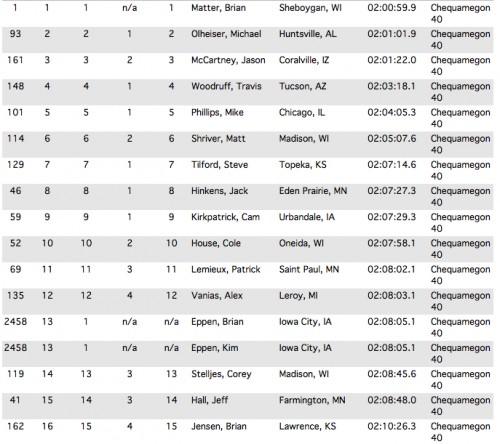