Man, the road race here in Steamboat was very hard yesterday. I don’t know how many feet of climbing we did, but it was tons. I didn’t know what to expect, but the climbs were much longer than I had anticipated.

I wanted to not miss an early break, so I went with about everything. I am trying to get some form for the Chequamegon MTB race in two weeks, so thought an off the front mission would serve me best. Very early on I got into a 4 man group that was going much too hard for me. I was pulling, but not great. I was way short of oxygen. I can tell I am at altitude and not acclimated when my forearms are gassed. And they were pretty much the first hour.

There was another 5 rider group about 30 seconds behind us and I talked my guys into waiting up for them after 10 miles or so. We were pretty diss functional after that. I thought it was because of tactics, but now realize it was because everyone was at their limit.

Eventually, Keith Harper and Brent Peters rolled off the front on a long downhill and kept going. I knew my group was done, so I bridged up to them on the next climb. I was riding okay, but no air. We kept going until we turned right to do the extra 15 miles that the other classes didn’t. And that was when it got really hard. These climbs were more like mountain passes. At least two of them were. And we had to ride them out and back.

I started cramping right when Nathan Wilson, the strong guy from the criterium the day before came motoring by. I didn’t even accelerate. It was 2 miles before the turn around at the top and my legs were firing all wrong. Scott Moninger came by next, alone, and bridged up to the front two. I was riding alone in 4th. At the U-turn, there was a group of 6 coming, so I ate something and waited. I was lucky that it was head wind climbing on the way back or I never would have stayed on. Colby Pearce was tail gunning the group because Scott was up the road.

I lasted until the 2nd to last climb before my legs completely seized. I don’t get this cramping thing. Here I think the reason was riding too hard with not enough oxygen, but I’ll never know. I was only off a hundred meters at the top, but it rolled mainly downhill the next 4 miles until the finish climb and I coasted most of that. Dean Crandell and Rishi were in Dean’s mini following our group. It was a little demoralizing getting popped so late in the race, but the damage was done.

I limped up the last climb and finished 9th for the day. I thought I’d lose way more time than the 4 minutes I was back. I moved up to 10th overall in GC, so at least I’ll take back a little prize $$$ for the weekend.

I can’t state how hard the course was. And we rode it pretty fast too. We were over 7 minutes faster than last year’s time. That race was won by Peter Stetina, Garmin, over Chris Baldwin and a bunch of other climbing professionals. I don’t think it is really fair to compare race times year to year, but I guess I just did.

I rode to and from the race, plus did an extra ride with Trudi, so had exactly 100 miles for the day. We got Bromont and went over to the river for a swim. It was a pretty good day.

This afternoon there is another 80 minute criterium in downtown Steamboat. A flat course. It should be a field sprint, or maybe Scott will ride up the road. I don’t know. I’m just going to see how I feel, I’ve gotten a lot of fitness out of this race already. 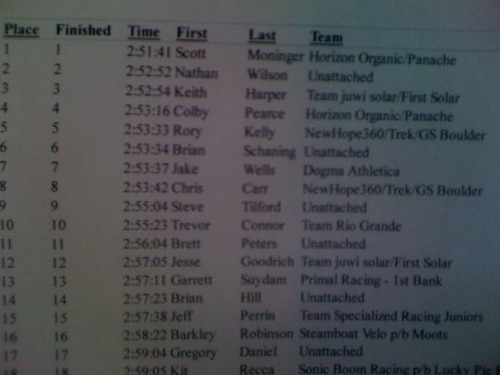 Results from the road race. Click twice to enlarge. 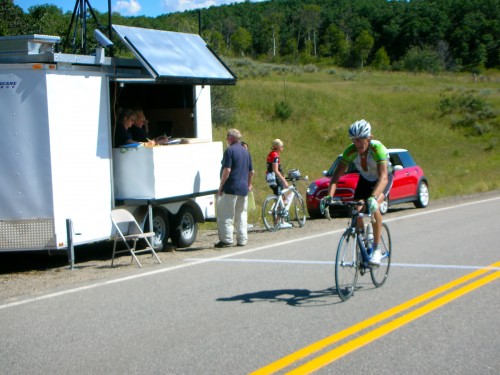 Limping across the line. No one seems too interested. Dean's little red Mini Cooper S in the background. 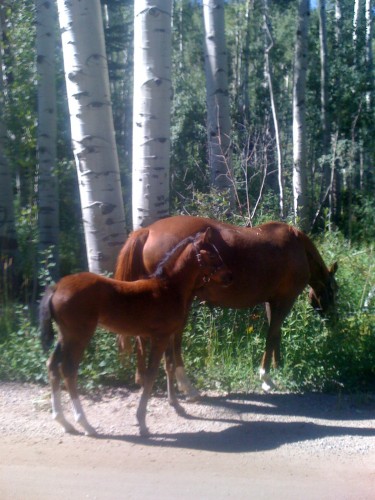 These guys were just wandering at the bottom of Kent's driveway yesterday when we were heading over to the race. 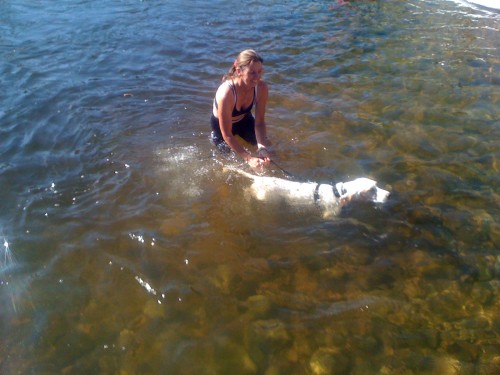 Trudi and Bromont swimming in the Yampa after the ride. 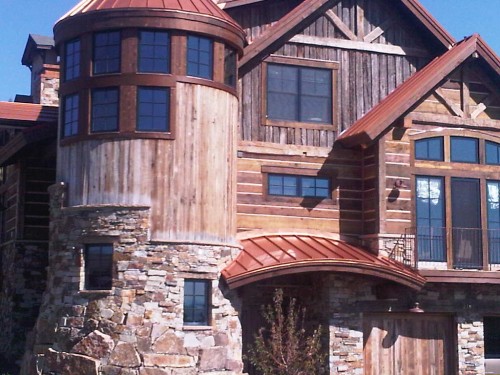 There are lots of cool houses here in Steamboat. They mix wood, stone and metal pretty well. This is one of my favorites.