Today was a very nice day in Colorado. Last night was a little late. It was nice staying with Trudi in Vail. This morning I met up with the Kansas crowd that had ridden over from Frisco and we went down the valley to the start in Avon. Like I said yesterday, I’m not big on watching bike races, especially the neutral roll out of a point to point road race. But, I saw a few more folks I hadn’t seen for a while. I saw Peter Stetina and he said that he went out way too hot in the TT, so suffered badly at the end. He finished 2:18 back in 38th, which wasn’t that bad.

We met Keith, Catherine and Jeff Unruh in Frisco and ate at the Blue Spruce. It was definitely in the top 10 of all time best meals I’ve had in my life. And I’ve eaten at some pretty great places. Jeff treated us to dinner, which was not necessary, but super nice. He also hammered Keith and Catherine over Vail Pass, so maybe he felt badly about it.

I took Bromont out for an hour romp when I got back to Silverthorne. He came back happy, but totally covered in burrs. Catherine took her own initiative and decided to cut all the burrs out of his tail with scissors. When means she cut most of his tail hair off. Now it looks like a rat tail. Bad Catherine.

So, today we’re going to go over to Breckenridge and then ride over Loveland Pass and back before the finish of the race. Trudi still hasn’t seen Bromont since she left before Utah, so tomorrow it is a priority. Then we’re heading down to Boulder to a BBQ at my old Wheaties/Schwinn team mate, Thomas Prehn’s house. A lot of the people that were at the Coor’s reunion are coming, so that should be good again.

I’m staying out in Colorado next week and am thinking about racing a stage race in Steamboat Springs over Labor Day. I hate to miss the St. Louis Races, so I’m a bit torn. We’ll see. 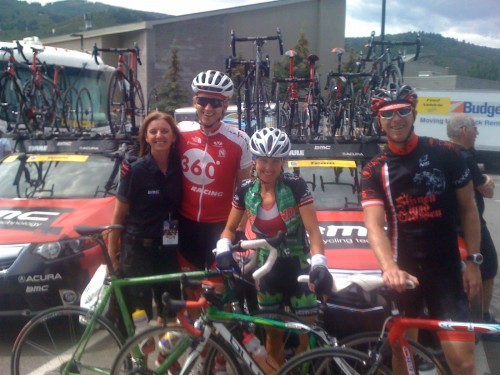 Trudi, Keith, Catherine and Jeff at the start by the BMC camp. 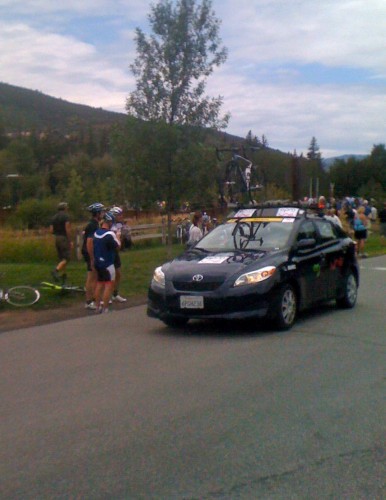 This is Gus driving the 2nd team car for one of the Colombian teams. I like the one bike on the rack. 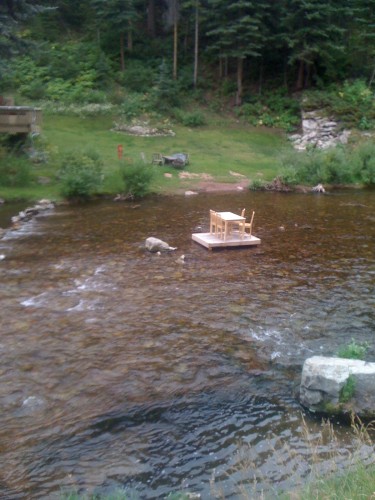 Nice place to dine on the stream heading back up to Vail from Avon. 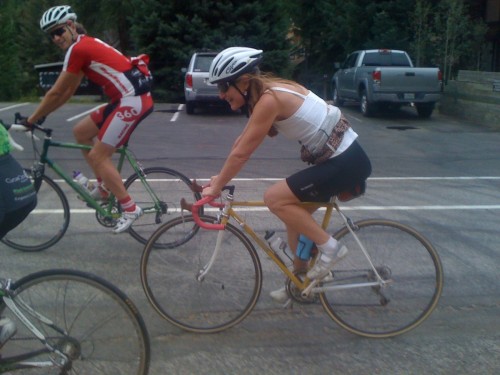 This is Marianne Martin, who orgainized the Coor's reunion. She won the 1st Tour de France for women. I haven't riden with someone with downtube shifters in a long, long time. 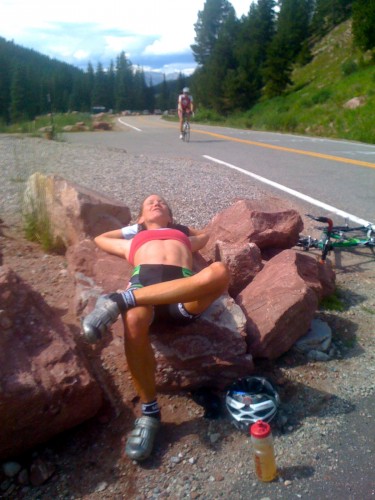 Catherine at the top of Vail Pass, waiting for Keith, in the background. 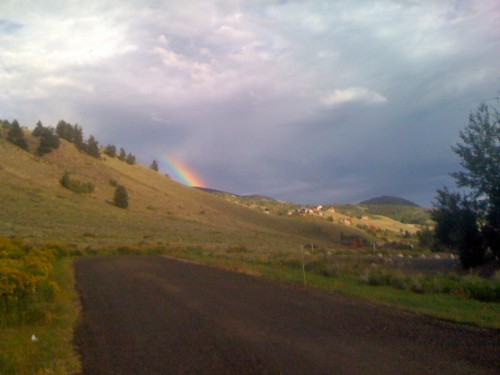 We saw this partial rainbow coming back from walking Bromont. The photo doesn't do it justice. This might of been the brightest rainbow I've ever seen. I hope my wish comes true.