Okay, yesterday I wrote about it being hot. This might be the worst I’ve been in the heat in a long while. I guess I haven’t been in temperatures over 70 for 3 weeks or so. That is probably the cause. But, I blew up so badly yesterday that I’m kind of hesitate to even attempt it again today.

It was super hot yesterday. 103 with a heat index of 116. One of my problems with heat is that it doesn’t really feel bad. I can’t really tell how hot it is until I start melting. And when I start melting, it is a very quick occurrence. We rode 40 something miles yesterday. I felt okay considering what I’ve been up to. I did run out of water 45 minutes into the ride, but that normally isn’t an problem. I should have seen the writing on the wall.

I did make it back to about 2 miles from my house before I couldn’t really function anymore. I felt horrible. Nauseated, headache, no power, ect. When I got home, I drank a couple glasses of water and ate some watermelon. But that didn’t help much, so I went to bed. I stayed in the above mentioned state half way through the night. Plus I was cramping when I was sleeping. There is nothing like getting woken up by your hamstring cramping. If you’ve never experienced it, you are missing out.

Okay, enough of that. I’m going to get out of here in a week, so I have to just shut up and put up with it. It rained last night and this morning, so it’s only going to be 100% humidity on top of 102.

I emailed all the Kansas representatives in Washington today about this political situation on the debt ceiling. The last time I contacted these guys was way back when they were trying to make it illegal to smoke on airplanes. This is a joke. They’ve raised the debt ceiling 77 times and they are waiting until the last minute because of political issues. Our political system needs a revamp.

I have to put a new water heater in my house. I’m trying to figure out if I want to use a tankless, hot water on demand, heater or the standard water heater with a tank. I’ve been reading some on the question and am leaning towards just the standard water heater. I can install either myself, so that cost isn’t an issue. I’ve been to a few houses that have the tankless water heaters and haven’t been too impressed by the results. From my experience, it takes too long to get hot water, thus using a ton more water. Anyone have any ideas, I’d appreciate it.

Trudi had a new BMC bike waiting for her when she got home from the Tour de France. I assembled it. It was easy since their team mechanics had assembled it originally. There is such a difference between a bike shop mechanic and a team mechanic. Anyway, she hasn’t had a new bike in over a decade, so it was a eye opening experience. It’s all Dura-Ace, so it is pretty sweet.

The kitten has grown a ton since I last saw him. But, he is still really small and kind of uncoordinated, which is kind of cute in kittens. It is healthy though. I kind of thought it was going to have some issues since it was so close to death, but it seems to have recovered pretty good. It is going to have the run of the house pretty soon.

I’m trying to decide on races to go to now. I’m going to go out to Colorado and ride my MTB for a week, then head over to Utah for the finish of Tour of Utah. After that I’m kind of up in the air. But, I know there isn’t going to be any racing for me this weekend anywhere around here. Baby steps again. 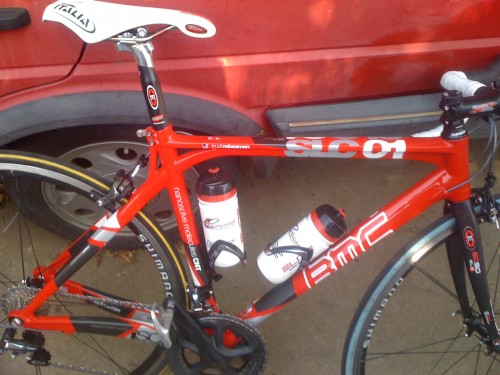 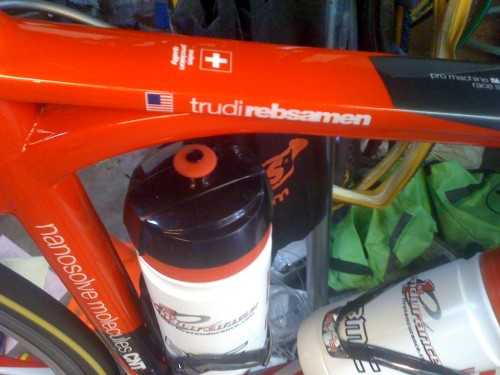 Looks Swiss even though there is an American flag next to her name. 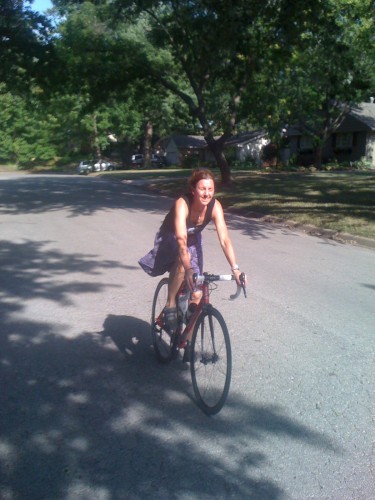 Out on her first ride. It rides so good she doesn't even have to open her eyes. 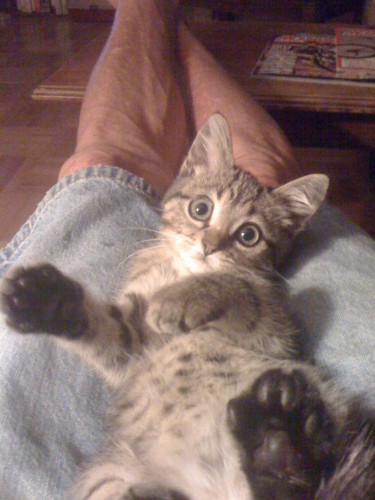 This kitten is much smaller than the photo portrays. He is great.