I don’t know if I am putting out a certain pheromone that is attracting police or what, but I have seemed to have more than my share of contact recently. Twice the last two nights.

Last weekend, a neighbor, a block away, had his dog shot and killed, at 3am, during an attempted burglary. Bromont knew the dog. The police took the situation seriously, as they should, and did the forensics, etc. associated with an attempted armed robbery.

So, two nights ago, I took Bromont out for a walk to a park a couple blocks away and a police car came up and asked me what I was doing. I told the officer that I was walking my dog and she seemed okay with the answer, even though I was kind of nervous that I didn’t have him on a lease.

So, last night, around 11:30pm, I was doing the same walk, mainly because the night before, our, sort of, cat, Lilly, came crawling down a tree and walked with us. We hadn’t seen Lilly for nearly two weeks and I thought he was gone for sure. It turns out that he must of just moved in with someone else, because he has gained a ton of weight and seemed healthy. I brought him home, put some revolution for ticks, mites, etc. on him and sent him on his wandering ways.

So, I was just getting to the park and a car, like a Ford Taurus or something pulls up really slowly. I’m not paying too much attention to it until a spot light hits me and I hear this shout, “Hey, what are you doing there?” I said something like “Excuse me?” Right then a Ford Explorer pulls up behind the other car.

So, a police officer gets out of the first car and shouts the same thing again. I say, “Sorry sir, I didn’t realize you were a police officer. I’m just walking my dog.” He comes walking over towards me kind of aggressively and says he doesn’t see any dog or something like that. I whistle and Bromont comes over with his flashy light on his collar blinking. Two more police, a male and female officer have came over and spread out behind me.

The situation stayed too tense for my liking, so I say something like, “Is this how courteous you are normally with your interactions?” Maybe not exactly that, but something implying he was being pretty impolite.

So, it seems he realizes that I’m what I say I am and starts to leave, but the female officer shines her light into the park at Lilly, who has appeared. I say, “That is my cat Lilly, he is walking with us.”

That simple sentence seemed to set the first guy off again. He comes walking back saying something like he doesn’t have to take this shit. I say, “what shit”. He goes into a rant about mouthing off about the cat, on and on. I say, “Hey, that is my cat and he is walking with us.” It wasn’t meant to be anything other than explaining the cat to the other officer, who was shinning her light at him.

So, then it is, “Do you have any ID on you?” I say no. “Name and address?” I say, Steve. Tilford. Then to my surprise, he says “You’re that world famous mountain bike racer.” I say yes, I ride bikes. He completely changes his demeanor. But, the female cop isn’t so easily convinced. She’s asking me how to spell my name and my birth date, etc. So, one guy wants to talk and the other is still being official police person and is running warrants. The third guy never said a word.

I ask if I can go and he says sure. I walk off and they sit there a bit and eventually drive off.

I don’t really have any problem with the police making sure my neighborhood is safe. But the problem I had with the encounter is after all the identities were established, the tone of the situation never got polite or to a normal conversation. It stayed in the intimidation mode until I was “recognized”.

I think I’m a pretty normal guy. I don’t think there was ever a mistaken identity here, that I was the burglar they were searching for. I am just lucky I’m a white guy that happened to live in the neighborhood. I can’t imagine what I would have encountered if I was a Hispanic or black man just walking to the grocery store down the road. It didn’t go all that well for me. 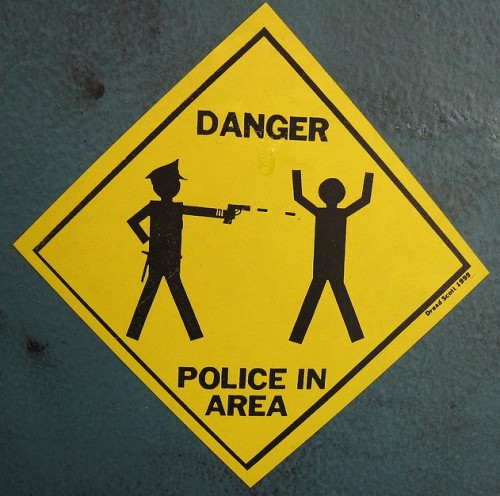