Whenever the drug thing comes up in conversation, it truly amazes me how many times eventually someone will say, “Fuck it, we should all just start using drugs.” Then nearly everyone talks excitedly about the prospect of riding that fast. But, when it comes down to the chase, it seems that most of “my guys” just want to beat up on the riders that they perceive as riders that are doping. In this imaginary scenario, they have no desire to use them to ride against their normal guys, just the cheaters.

I think it’s an interesting differential. Get back at the dopers by doping and beating them? I don’t think that makes much sense. It has been happening for decades in Europe and no one seems put out too much by it. Someone wins a bike race and the rest of the guys lose. I don’t think that punishes the doping riders much.

So, in these discussions, it seems to be a consensus, that the riders that are domestically riding and doping are much higher on the moral deviate ladder than the Euros. Especially the foreign guys that come to the United States and take slots on US teams and then whoop up on everyone until they eventually get caught. Or not caught, depending.

I have to agree with the domestic dopers rubbing me the wrong way much more than the Euro riders. When I think of true bike racing pricks, the first name that comes to mind is Ivan Stevic (how about that Driveway Criterium Result in his resume?). That was so obvious that any team that he rode for shouldn’t be allowed to ever have a license again. He raced over here for years and took thousands, if not hundreds of thousands of dollars in prize money away from regular domestic riders. Now he’s racing over in some Eastern Block country, winning races like Tour of Serbia.

Anyway, I’m not sure why guys like Stevic, Kirk O’bee, Nathan O’Neill and such, seem more morally despicable than the Euro guys, including American Euro guys. Maybe it is because I can sort of see the thought process of trying to climb the European peleton ladder and that ladder had no rungs if you didn’t dope.

But, the guys beating up the US domestic riders, that seems to be pure greed. And the arrogance of dictating the races and acting all almighty is so wrong. I guess that since I’m closer to the scene here, is hits closer to home. Maybe RealCyclist.com can sign a two year deal with Roberto Heras now that his doping infraction has been thrown out by Spainish courts. He and Francissco Mancbo would make quite a team and really dominate the NRC calender here in the US.

Whatever the perception, it is everyone’s responsibility to address it. I couldn’t believe when I was looking to see what Ivan Stevic was up to nowadays, how many interviews and articles popped up on google from Velonews, Cyclingnews, etc. touting what a wonder boy Ivan was. This was before the “news” came out that Ivan was in the US racing because he’d been caught it Italy selling doping products. Then he just disappeared and reappeared somewhere else. Our sport sucks in that regard. 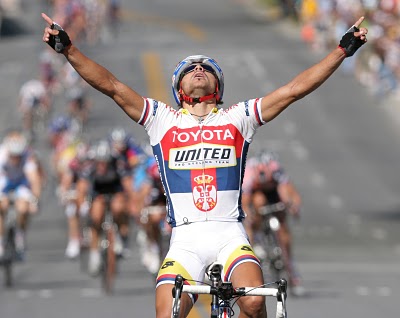 Ivan Stevic winning in Georgia, before his issues. 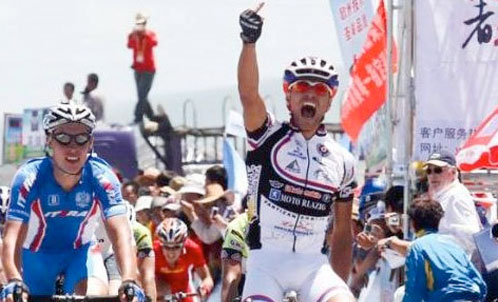 And in China after his reappearance.