The Tour of Kansas City is officially over. Shad Smith won the overall and gets his name on the trophy. I ended up finishing 3rd overall in some weird tie breaking way. I finished a miserable 3rd yesterday in the final race so I guess a 3rd, 6th and 9th = 3rd overall. And by miserable, I mean that I felt miserable most of the day.

I got off the front early with Kent Woermann, Team Colavita/Parisi Coffee and Austin Vinton, Mercy. I felt better before the race and mildly better early, but never got close to going good. I keep getting a super debilitating side ache. Maybe it was a combination of the heat, which was off the charts, and riding lousy.

We stayed together until the end. Kent put in a couple hard digs, but it wasn’t until Austin jumped on the final tailwind uphill that I realized it wasn’t going to be good for me. He put a pretty good gap on me and I couldn’t claw my way back. The finish was downhill a couple hundred meters, so it was over. Kent got shelled a bit, so I sat up and let him get 2nd on the day. He was doing the majority of the work and deserved the result. Austin is getting better and better as the season progresses. He’s gonna be a force to be reckoned with soon.

So that is over. I’m planning on eating a bunch of yogurt and probiotics and see how I feel next weekend at Tour of Lawrence. If you have nothing to do next weekend, you should consider making your way over this way. The race is great. Racing in downtown on Mass. St. doesn’t get any better. And the circuit race on KU campus is the best course I race all year, and close to the hardest. I think we’re doing just 55 miles with something like 9000 ft. of climbing.

I’m taking Trudi to the airport now. She is flying to the Tour de France this afternoon. She is only going to be gone a month, coming back for the Tour of Utah and the new PRO race in Colorado. She begin stressing a bit the last few days trying to get ready. It doesn’t help much that I was racing a 3 day stage race this past weekend. She is carrying some new prototype TT helmets and other stuff, so it is going to be difficult hauling all the stuff around once she lands in Europe.

It’s supposed to be in the upper 90’s most of this week, with a couple days at 100. Plus, we’ve been having thunderstorms each night, so the humidity is nuts. I’ve never been much to get up early and ride in the morning. I might have to rethink that this week. 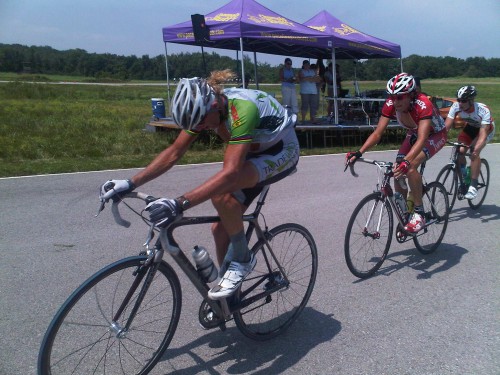 You can tell it can't be going good when I'm looking at the ground pulling. 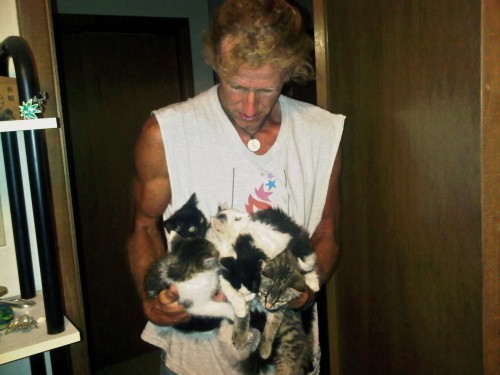 The cats are getting full use of the TV room now. Still 5 available. If you know anyone that might want a kitten, I'll figure out a way to get it to them.