I took the diesel van to the glass place to have a new windshield put in this morning. I’m supposed to pick it up by 11 am to leave for Tulsa at 1 pm. I put a new windshield in last summer, the morning before driving out to Colorado. Less than an hour after I started driving west, it was done cracked by a rock. That pissed me off enough that I’ve put off getting a new one for the last 10 months. If it wasn’t making a crazy buzzing noise from not being installed correctly last time, I still wouldn’t be having it replaced.

The Tulsa Tough NRC starts tonight at 9:15 pm. Then again Saturday night about the same time and finally finishing up on a real hard course, in the heat of the day at 4:30pm. All the courses are good and the field is just good enough that the racing is super animated and exciting. A few years ago, Toyota-United brought 12 guys to the race and made a joke of the race. Stevic and Co. were such ball hogs, it was embarrassing watching them stack the results day after day. With the other NRC race going on East, the racing is going to be good. If you’d like to watch it live, Velonews is showing it. Click here for the link. The Pro race is a 9:15 pm, like I said above. Woman’s race is 7ish.

I’m not riding good. I haven’t really gotten well from two weeks ago. I’m still coughing stuff out of my lungs and am generally run down. But I’m sure the heat has been exacerbating the problem. It has been nearly 15 degrees above the normal high of 82 for the last week and a half. I hear it takes nearly 20 days to get used to heat. I don’t have any idea if that is close to the right number, but I know that I’m not up to speed now.

Wednesday we rode close to 45 miles and averaged 22.3 mph. We didn’t really start riding hard until the last third of the ride either. It was hot and windy, so I don’t know what got into the group collectively. Everyone sort of petered out the last few miles and it was only Bill and I pulling at the end.

Yesterday I rode to Lawrence to meet Trudi for dinner at Teller’s. It is a restaurant that is a old stone bank building (thus Teller’s) on Mass. St. in downtown Lawrence. The ambiance is super. Eclectic lighting, bathrooms in the vault and stone cooked pizza. If you ever have a chance to eat there, don’t pass it up. I rode over pretty slow, I thought, but still had nearly a 20mph average. Maybe it was a bit tailwind, I don’t know.

I guess Lance was in KC last night for the opening of a new sport arena named after the Livestrong Foundation. They were playing soccer there last night. Livestrong gave something like 160 million dollars towards the cost of construction. That is a lot of money.

Okay. I’d better pack. Sort of packed last night, but that never seems to make today that much faster. I’ll let you know how the Oklahoma races go. 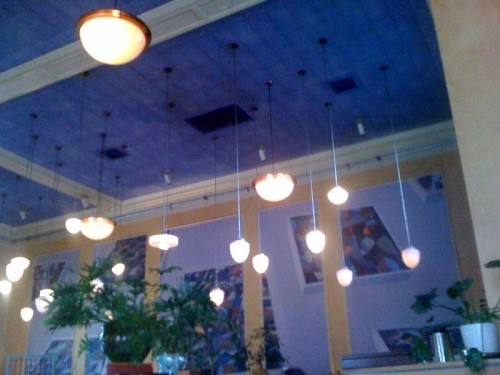 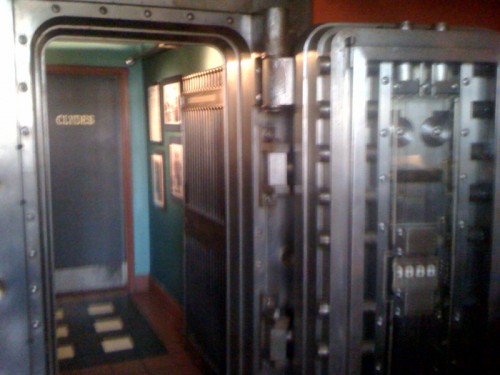 Bathroom in the vault at Teller's. 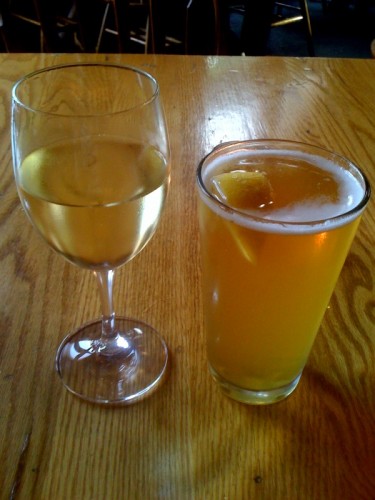 Had to have something cold after riding there. 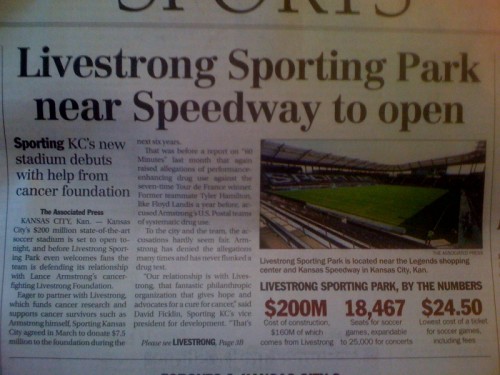 Article about the Livestrong Park. Click twice to enlarge. 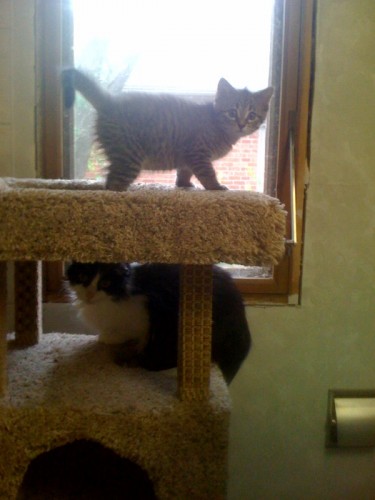 As the kitten grows up in the bathroom, the mother is getting either nicer or meaner. I'm not sure yet. Tuesday, the mother cat is getting spayed, so they are going to be able to run loose in the house after that. The kitten is lovable, any takers?