I’ve been getting some emails asking about the race on Sunday. Guess I got caught up in a lot of other things and forgot. There was a huge hail storm in Topeka Saturday night that destroyed just about everything that I own that was outside. That wasn’t good. But, I was up in Nebraska still racing.

The race on Sunday went fine result wise, but I felt shitty. The course was harder than I remember. Or I was just worse. It was only 60 minutes, with one medium sized hill. But, it was windy again. The race turned into an attack, then chase-fest. We’d, TradeWind Energy guys, would attack and then everyone else would chase. Kind of like a lot of woman’s racing goes. That isn’t belittling woman’s racing, it ends up being pretty hard. Changing speeds in bike racing is where it gets tough.

Finally, Brian just rode away. Brian’s secret in cycling is that his attacks are pretty stealthy. He doesn’t look like he’s going as fast as he is when he initially goes. I, on the other hand, thrash my bike back and forth and look like I’m going faster than I am. Anyway, I was planning on jumping up to Brian the next lap on the hill, but I was coming from the back and someone attacked on the hill and I got sort of gassed and had to wait some. By then, Brian was way gone.

Eventually I jumped over the top of the hill and only Austin Vinton, from Mercy Cycling, came along. Austin had been covering nearly every move himself the whole day and was pretty impressive. We rode just one lap and they rung the bell. I thought we had 30 minutes to race at least. It didn’t really matter. Austin tried to loose me a couple times before the climb and once on the hill itself before the finish, but that wasn’t going to happen.

So, Brian won, I finished 2nd and Bill was 3rd in the field sprint for 6th.

The guys up in Nebraska do an unbelievable job promoting races. The amount of energy they put out for these local events is unreal. They had custom podiums, custom banners, chip timing, water, coffee, just about anything you’d imagine at a huge race. It is a pleasure every time I go up there to race.

I guess we’re heading to Iowa this weekend for Snake Alley, Muscatine, and Rock Island. I really want to head to Colorado and sit at altitude for a couple weeks before Tulsa, but I can’t skip Memorial Day in Iowa. It’s too much fun. 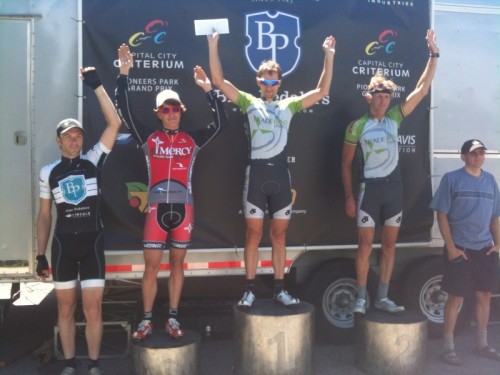 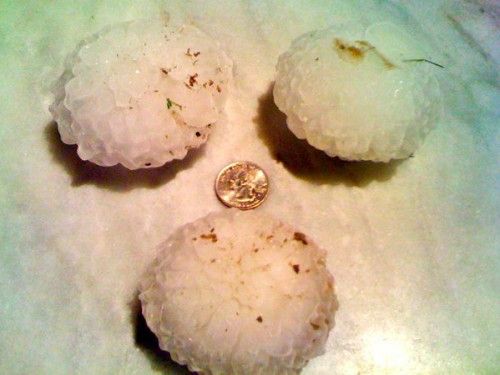 Hail Kris picked up in the front yard. 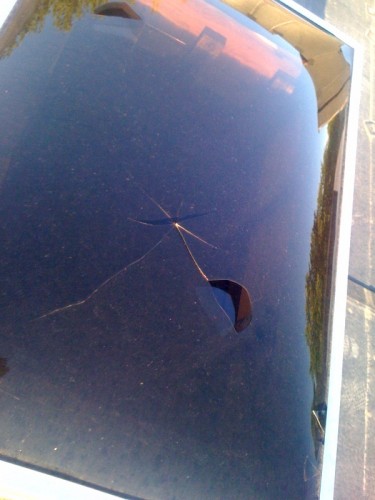 All five of the new skylights at the building were toast. 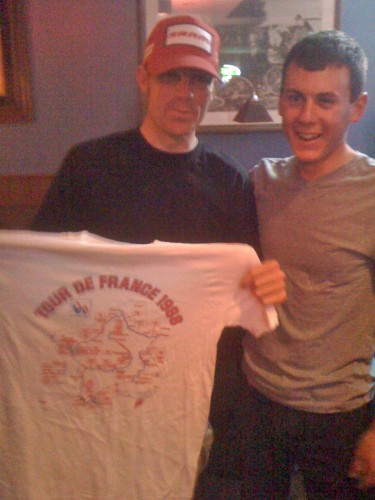 Friday night I drove down to KC for Bill Marshall’s 40th birthday bash. I gave him a 1988 Tour de France T-shirt from the basement collection. Joseph, on the right, wasn’t even born yet. I was lucky to get out of there barely hurt, just a couple Red Bull and Vodkas.