Yesterday was a long day. I’d pretty much decided not to race Joe Martin and emailed Brian and Bill that very thing. So, I thought that it was time to remove the stuff from the “rental house”. I’d driven over to Lawrence and borrowed a dump trailer from my friend Matt, who is the czar of TradeWind Energy. I’d just put a Class IV hitch on my diesel van and it wasn’t exactly perfect for the trailer, so it took some reconfiguring.

Anyway, Bill said they weren’t leaving for Fayetteville until Friday morning. That got me rethinking the race. So, I thought that if I got all the trailer stuff done, I’d go. I asked Bill if he had anything that he needed taken to the dump and he said a sliding glass door that we’d replaced last year. I took the trailer by to get it and Bill ended up helping Trudi and I move the stuff from the rental house, to the trailer.

I’m apprehensive about calling this a rental house. That was never the intention. And it really isn’t a rental now. The reason for that is that there are lots of people that will live there, they just won’t pay rent. And anyone that could afford to pay rent, won’t live there. It is a house with no potential for the rental market as far as I can tell.

It is weird messing with other people’s stuff. The guy had moved about 3/4 of his belongings, but there was still a lot left. It wasn’t like it was dirty stuff. It just wasn’t mine and I didn’t like touching it. Anyway, it ended up being nearly too much for a huge trailer. We filled it to the top and I took Trudi and Bill home before I heading to the landfill.

If you’ve never been to a landfill/dump, you should go. I have a friend in Lawrence, Bill Anderson, that runs a scout troop. He says he takes the scouts to the Lawrence landfill, on a field trip, nearly every year. It is important for kids to know where stuff goes when you throw it away.

Anyway, with the dump trailer, I had to drive up into the dump where the trash trucks unload. It is something out of a sci-fi movie. The machines, the smell, the birds, everything. The wind was blowing pretty good and I was on the top of the trash heap. I didn’t want to back up to the pile as far as the guy in the smasher machine liked. I didn’t want to be walking or driving on trash.

So, I took the tarp off the top and was dumping the stuff, when I stepped on a board that had a huge nail sticking up. I immediately knew the feeling. I had steel toed boots on. Guess I needed steel shanks too. So, the board is stuck to the bottom of my boot and the nail is in my foot. It took a little while to pull the board and nail off my boot. The pain wasn’t too bad, so I just went ahead with the dumping.

I went home to look at my foot, then decided that I’m not going to race, so just left my boot on. I figured that the pressure on the bottom of my boot was sufficient enough to stop any bleeding. I ended up cutting a 30 foot tall hedge for the next 5 hours, until dark. The trailer is full again and my arms are completely done. Toast. It is amazing how shitty I can be, doing just about anything, during racing season. Even riding a bike. 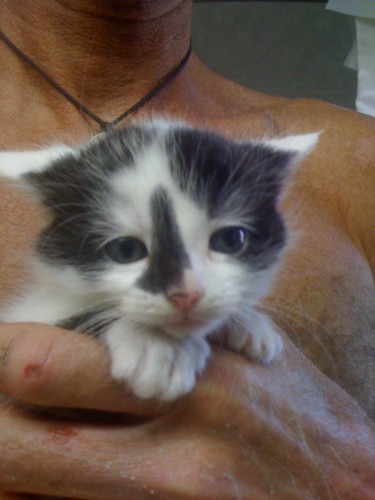 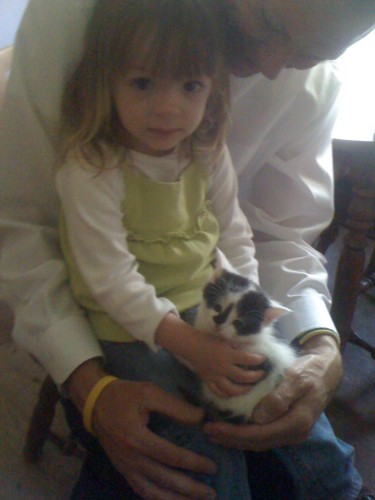 Smudge's new family, my friend Teddy and his daughter Isabella adopted him. 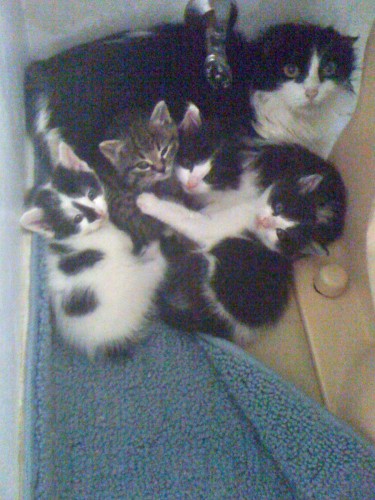 Last photo of the cat family all together. There are still two kittens unclaimed. Plus, the mother who might be okay, I'm not sure yet. She hasn't bitten me and I pet her a few times a day, but she doesn't like it. 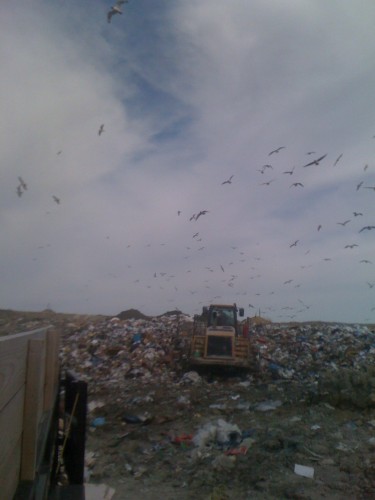 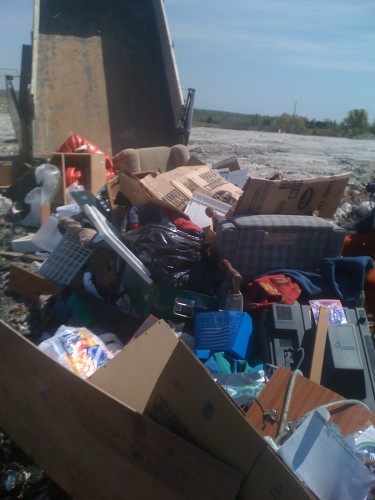 I hated throwing it all away, but really didn't want to touch it or see it anymore.