I finally rode over to Kansas City and did the training criterium yesterday. I haven’t done a Tuesday night’r this year. We got a little behind, so Bill and I drove over to Lawrence and rode the 35 miles to the race with Joseph Schmalz and Adam Mills.

Here’s the deal. Don’t do intervals on group rides. I’m not going to name who was guilty, but there was an interval session happening. But, in this instance, it was actually fun. 6 minutes on, 1 minute off. Just 300 watts, so it was super easy to sit on. After 20 miles of the ride, we had a 23.5 mph average. We got there pretty early. But as a practice, when people show up on a group ride, individual training, ie intervals, are off the schedule.

The race was good. There was virtually no wind, which is strange for here. So, it was really hard riding off the front and super easy sitting in. Brian rode over 1/2 the race off the front, which is good training. If we had power meters, he would have done twice as much work as me during the 50 minutes.

Bill, Brian and I are going to Iowa City this weekend I think. There are 3 races there, a road race and TT on Saturday and then the Old Capitol Criterium on Sunday. It is supposed to rain on Saturday, but clear up for Sunday. I’m just going mediocre to poor, so we’ll see.

I drove over to Lawrence yesterday morning at 7 am. for the arraignment on the improper backing ticket. I couldn’t believe how small the municipal court building was there. Super small. The judge was great and explained, in basic terms, all the options. He pretty much told everyone to just go and talk to the prosecutor and work something out. Which is exactly what I did.

The prosecutor was young. What surprised me is that he had a printout of a long description that the police officer had written that explained exactly what I did. Then he asked me if that was correct. I told him yes. He said what was the issue then. I pulled out the STO (State Traffic Ordinance) that I’d printed out and asked him what part of it pertained to my actions. He read it and said neither. And dismissed the ticket. It took about 2 minutes. Small communities are so much better in these instances. And Lawrence isn’t that small. The municipal court in Topeka is a zoo. And trying to see a prosecutor is nearly impossible.

So, we’re driving to Iowa City on Friday I guess. I’m going a little stir crazy here in Topeka, so it will be good. I’m apprehensive about the racing aspect, but you have to start somewhere. Baby steps. 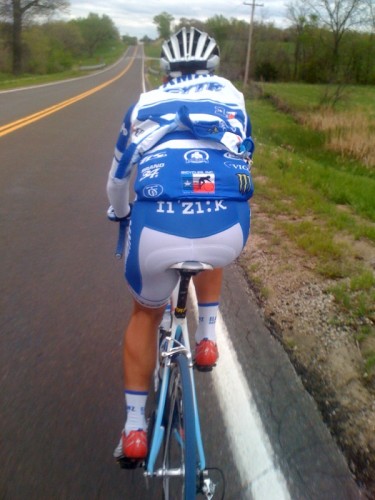 My view the first have of the ride over to KC. Oh no, the cat's out of the bag. 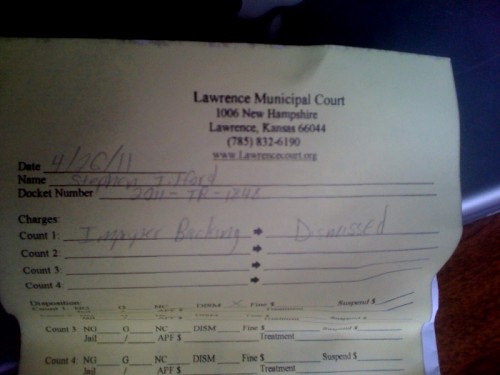