My record is 7 races straight. Obviously, those races are not even close to being on the same level as the last 4 Phil won, but it was still winning nearly a month straight, racing Saturday/Sunday, for 4 weeks.

It started in Kansas in the Spring of 1982. I won a couple races in Kansas, which was not out of the norm. Then I went down to Oklahoma and raced the Tour of Talimena. It was a important race that was two very hard, climbing road races. I won both days. They need to resurrect that race. It is unbelievably hard, steep, climbing, in the mountains in Eastern Oklahoma.

The final weekend in Minneapolis was the most interesting. It was the most stacked field. There was a lot of money for the weekend. I think LeMond might have been back for it, but don’t know for sure. 7-11 was there for sure. I don’t think Davis made it there until the 2nd day. The first day was in a business district. I don’t remember the exact play by play, but I got away with a few guys and won the sprint. I remember them announcing me to the podium and then saying that I’d won a futon, along with the prize money. I thought, what is a futon. I asked the other guys there and they didn’t know. So, the rest of my team went back to the van and packed up and I went over and got the futon. I remember walking back over to the van, carrying the futon, and everyone was joking about how I won a bed. I ended up sleeping on that futon 100’s of times back at Michael’s Cyclery in Ames. It was rolled up in the back of Michael’s office.

The next day was longer course around a lake. I don’t know what lake. It wasn’t a good course for me. No hills, completely flat, with no corners. Plus, a long finish stretch. I ended up getting in a big pileup about half way through the race. It was a longer loop, so there weren’t any free laps. I got up and chased back on, but it took forever. By then, Davis and a a few other guys were up the road. I raced another 15 minutes or so and the head official, Andy Bohlman, who also was a mechanic for our team, came motoring up and casually asked me if I was missing something. Andy is a really nice guy, but was a hard ass official. I had no idea what he was getting at until he held out his arm and he had my hairnet helmet in his hand. I guess it had come off in the crash and I’d been racing without it the whole time since. Andy just handed me the helmet and didn’t say another word. Pretty nice. Anyway, we never caught the break, so that was the end of it. I think Davis won the race, which he probably would have 9 times out of 10 on that course.

The sport was not nearly as competitive back then. I don’t think that there is a way someone could even cherry pick 7 races and expect to win all of them. That is what makes Phil’s last 10 days so unbelievably impressive. 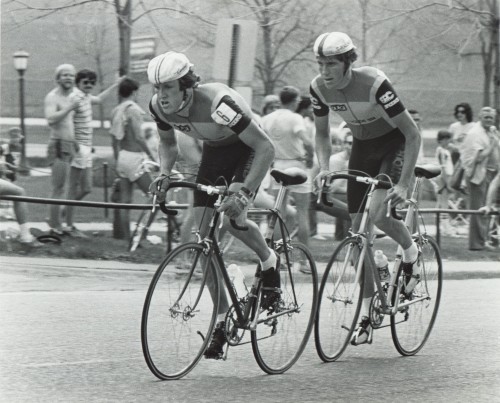 Paul and I on the hill in Iowa City. 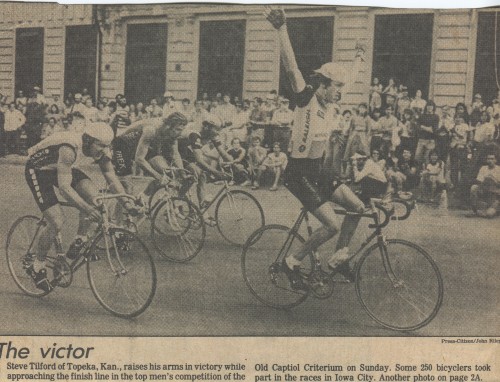 The newspaper clipping for the finish in Iowa City. It is amazing how many spectators were at all races back then. 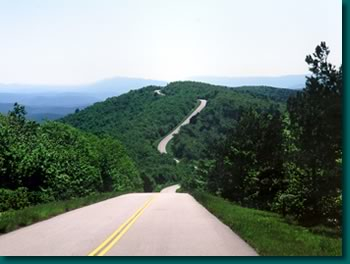 A photo from the ridge on the Talimena Scenic Drive. The loop that goes nowhere. A wonderful place to ride a bike.

Click here to see a map of the location.