The Tour of the Americas was an important race for European and American teams. Greg LeMond was having a break out race after being accidentally shot by his brother-in-law the year before.

The Overall Super Series was a combination of your GC from the Venezuela and the US. It was scored on points. The Florida GC was pretty much decided by my break, held up by the train, and the TTT. Plus time bonuses. Every stage was a field sprint

On the final stage, everything seemed to be set in stone. Bianchi was happy since Jesper Worre was going to win the Overall GC. 7-11 happy with Davis winning the Florida CG. We we good with 2nd in individual GC and winning the Team GC, plus KOM and Points. The last stage rode down the east coastline of Florida and finished at Coconut Grove in Miami. There was one point sprint during the stage and the time bonus with it. But, the time bonus didn’t seem important because all the GC riders were separated by more than the 5 second bonus.

I’m not sure how far we were winning the Team GC by, but it couldn’t have been much. Coming into the mid race time bonus sprint, I noticed that Vincent Barteau, from LeMond’s PDM team, was acting all nervous and looked like he was planning on going for the sprint. Something was up. I knew Vincent well, riding the Coor’s Classic with him the year before for La Vie Claire. The next year he went on to win the Bastille day stage of the 1989 Tour de France, which was huge being a Frenchman.

Anyway, I went over and talked to Michel Vaartens, a Belgium rider for my Wheaties/Schwinn team, and the fastest guy in the race. He had won the World Championships in the kerin and was a excellent track rider and sprinter. I told Michel that he should go for the sprint just in case. If PDM got that time bonus and won the stage, they could have passed us in Team GC.

So, like I observed, Vincent takes off early to try to win the bonus. Michel hardly had to try and killed him in the sprint. Vincent was crazy mad. Screaming in French. He even yelled at me for a bit, even though I had no idea what he was saying, it was obvious that he was more than mildly irritated.

The final stage finished in a field sprint and the results stayed the same as the start of the day. I was 2nd in GC, won the KOM overall, Michel won the Sprint Jersey, and we won Team GC. It was a successful race for our team. Jesper Worre from Bianchi won the Overall Series over Greg LeMond. LeMond seemed happy to be getting a result after his accident.

A few days later I was on the beach, thinking over the race and I got back to the time bonus sprint and Vincent wigging out when he got beat. It didn’t make sense. So, I went back and looked at the results and there it was. If Vincent would have won the mid race sprint there and got the 5 second bonus, he would have moved up and tied Worre on time. And beat him on GC since he had better stage finishes. If he would have been 6th, moving Worre back to 7th, then that would have been more than the 50 point difference to make LeMond win the Overall series. It was nuts. No one saw it. Bianchi never paid attention to it during the race. The journalists never wrote a word about it. Nothing.

I thought it was brilliant. I couldn’t believe that the Overall GC of a major race almost changed hands and no one even knew it was in play. It goes to show you that being observant during a race can really make a difference. If Vincent wouldn’t have showed so many outward signs of being nervous and going for the sprint, then I wouldn’t of have any reason to tell Michel to mark him, and LeMond would have won the series. And if Greg would have just came up to me and told me that Vincent was going for the sprint, we might have even helped them. There was no downside to having an American win this race. But, I think they thought the stealthy plan was the best. But, it didn’t work out for them. And no one was the wiser. 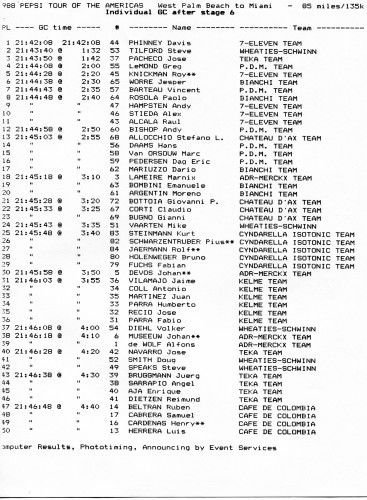 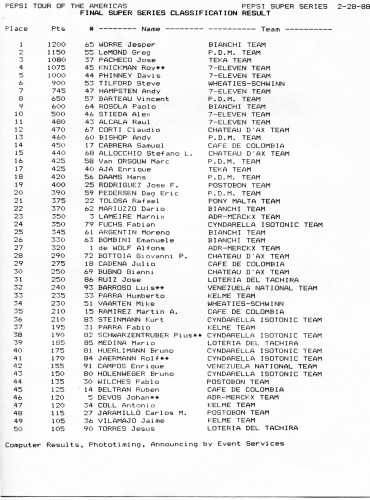 And the final results with LeMond 50 points behind Worre. 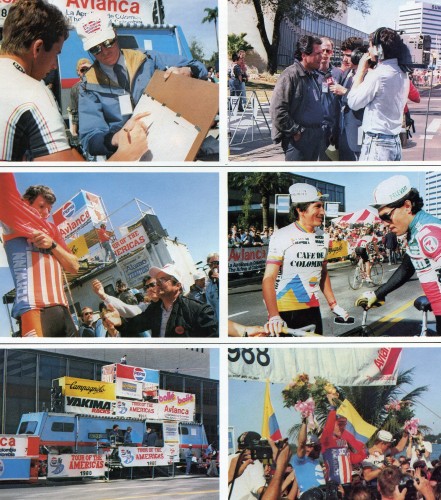