Someone emailed me and asked why yesterday Andy Chocha would pull to the bottom of the hill, just to get dropped. The answer is that Andy had already conceded and was going to finish 3rd. It is a weird aspect of the sport. Arranging before the finish who is going to win. But it happens all the time. There are lots of reasons for this and most are completely legitimate.

Andy was going to finish 3rd, at best, in the situation he was in. Brian and I, on paper, are better than him on a course like that. Finishing at the top of a hill doesn’t fit his riding style as of now. Plus, there were two of us against him. Andy was resigned to the place. We all knew it. Plus, he’d ridden nearly a 100 miles the day before and was looking at getting in some good miles rotating. He didn’t necessarily want to have to ride a 20 mile TT at the end of the race. I don’t blame him.

There are lots of other reasons to make “deals” on the road during a bicycle race. Especially during stage races. We’ve all seen Lance, Indurain, Jalabert, or whoever ride to the top of a mountain top finish and not sprint for the win. They are concerned with time, not stage places.

Anyway, one of the times that I got into the middle of a “deal” was racing a big money, 3 day race in Chicago. I was riding for the Schwinn/Icy Hot Team. I don’t exactly remember the set up, but for some reason each team only had 4 riders, I think. So, our full Pro Team was divided into 2 smaller teams. The same with 7-11. I was on the “Schwinn B team” for the race. We had a bunch of Euro track guys on the team then, but Thomas Prehn, Alan McCormick, Broz, ect were all racing here. I’m not exactly sure of the composition of each team.

Before the race, at a team meeting, Mike Farrell, our director told us that we were going to split prizes by how we rode. That wasn’t how we had been splitting the whole season. Thomas Prehn had been sick and probably shouldn’t have come to the race, but it was too much $$$ to pass up. He put up his legitimate verbal protest, but it didn’t go anywhere.

During the next three days, we raced 3 long criteriums. I think the first ended in a field sprint, which was always good for us. The next day, a break got up the road, and Thomas and maybe Alan made the split. Mike wanted us to chase to set it up for a field sprint, but that didn’t happen. I’m not sure what place Thomas finished, but he was good on the overall, probably 5th or so.

So on the last day, it was a long, flat criterium in downtown Chicago. A pretty boring course for me. With about 20 miles to go, Thomas ended up going off the front with Andy Hampsten. And was riding for 7-11 and had just returned from Europe. We had been team mates virtually our whole careers. Thomas was sick and not riding great, but better than expected. So, the 7-11 team and us were happy with the move. Andy was doing the mountain share of the work and Thomas was pulling when he could. There was a deal struck sometime along the way. Andy gets to win.

Of course, the rest of us in the field didn’t have any idea that was the case. I figured Thomas would outsprint Andy at the finish. There was too much money to “sell” the race. Then the twist.

With maybe 5km to go, Chris Huber, a super fast TT/sprinter type guy, jumps out of the field and bridges up to Andy and Thomas. He immediately goes to the front and proceeds to pull to the finish. I don’t remember the set up for the sprint, but the results were that Thomas won race and Andy came past Chris for 2nd.

Andy immediately came over to me and was crazy mad that Thomas had screwed him. I didn’t have any information, so I went over and talked to Thomas. He said that he told Andy he could win, but when Chris caught them and pulled to the finish, he didn’t think that Andy was going to beat Chris, so he sprinted.

I went back and talked to Andy. I realized it was a big deal if Andy would have won a big criterium when he just returned from Europe. But, the composition of the break had changed. And that negates all deals. Thomas wasn’t under any obligation to let Andy win that race. Thomas had agreed to get 2nd. Not 3rd. If Andy wanted to make another deal and include Chris, then he should have. As it turned out, they just sprinted for the win and it was all on the up and up.

But, in reality, it would have still all been on the up and up if Chris hadn’t mixed up the finish and Andy and Thomas’ deal would of been the result. Thomas wasn’t good enough to win the race and conceded to finish 2nd place. Before the finish. It sounds screwy, but it was the best he was going to do.

This happens all the time. It isn’t fixed bike racing. It is a tactic. It is a tactic that riders use to maximize their places. It is just a aspect that is very hard to explain to people not familiar with the sport.

Thomas ended up winning around $20,000+. Of course, Mike being Mike, changed his mind and Thomas just ended up with a couple thousand extra, which he deserved.

Here’s a link to an interview with Thomas on Pez cycling. I learned some things I didn’t know about him. Pretty interesting. 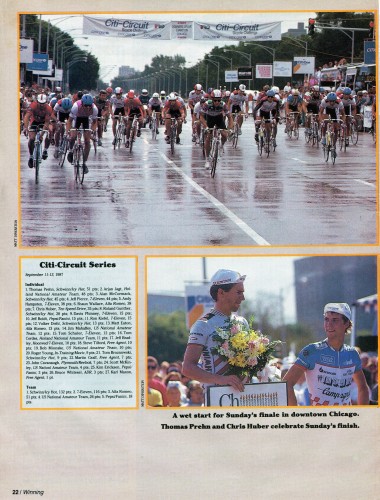 Here's a page out of Winning showing Thomas and Chris on the podium. Click twice on the picture to enlarge. 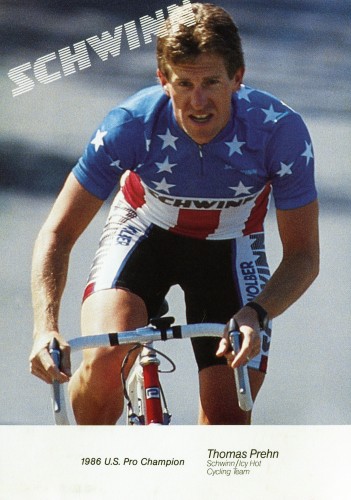 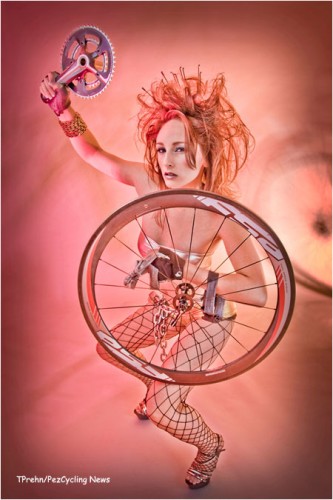 I didn't know that Thomas was a photographer. I found this picture interesting.