Yesterday was a surprise. And I don’t get surprised all that often in cycling. I decided to ride out to a local circuit race 20+ miles East of Topeka. We got a really late start. The race was at 1:30 pm and we didn’t leave to ride there until 12:10. And it was a stiff 15 mph headwind the whole way. Finally Bill and I had to start riding in line to pick up our speed a little and rest more. I’d bet we had over a 20 mph average riding to the race. And some of that was on gravel to shorten the ride.

Jack Mason, a buddy from Topeka is promoting the series. He already had numbers for Bill, Catherine and I, so we weren’t too jammed for time even though we only got there 15 minutes before the start. The day started cool and humid. I was never warm riding there. It was in the upper 30’s, but wet and windy. Big change from the last few days.

The race was surprising because I felt pretty okay. But, I’m not fooling myself, that was mainly because I never really had to kill myself. I felt like going hard, just not super hard. Which is exactly how the race played out.

The course is pretty hard because it has a 1/2 mile climb followed by a long drag on the top of a dam against a straight headwind. 8 laps of a 5.something mile lap. The field was small and it split up pretty quick. I think everyone wanted to get some intensity in. After a couple laps, Brian Jensen, Andy Chocha, and myself ended up off the front. I just wanted to roll through hard and get some quicker miles in. Seems like everyone had the same idea. We rotated pretty much the whole time, not taking the hill at a killer pace. Andy had ridden from Lawrence with Brian, so we all had about the same amount of miles for the day. Andy rides for the US Military Team and is also doing Redlands in a couple weeks. He’s slimmed down 10 lbs. or so this year and seems to be going better uphill than in the past.

On the last time approaching the climb, Andy took a big pull to the bottom and said adios. Brian won last week and I didn’t think he should get a streak going this year. A couple seasons ago, he won something like the first 6 races of the year. So, his streak ended at 1. He’s still at a 50% win ratio for the season. I just upped mine to 33.3%.

Bill had some issues and didn’t finish. And he caught a ride back to Topeka. I felt kind of bonky riding back. The air was not good. They were burning everywhere and the whole river valley looking like Britain in the 1500’s. I haven’t bonked for a while. It was interesting. I felt bad for Brian and Co. riding back to Lawrence into headwind. That couldn’t have been too fun.

I was thinking about getting out of town, but since it snowed so much last night, they won’t burn for the remainder of the week. Weird Kansas weather. 70 degrees, then 38 and windy, then 3 inches of snow, back to 60 the next day. It is just Spring. The normal high now is 54 degrees. Pretty alright.

So, the day was a success. Not quite 90 miles. Felt quite a bit better than I have. Can’t complain one bit. 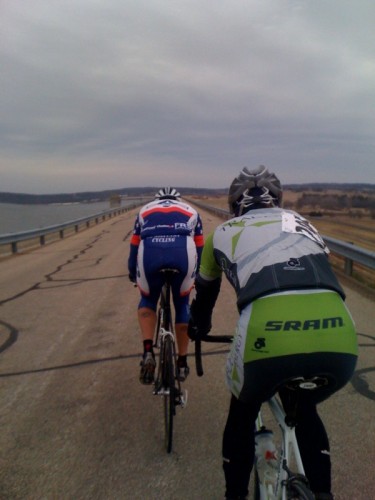 My view from the back behind Andy and Brian. 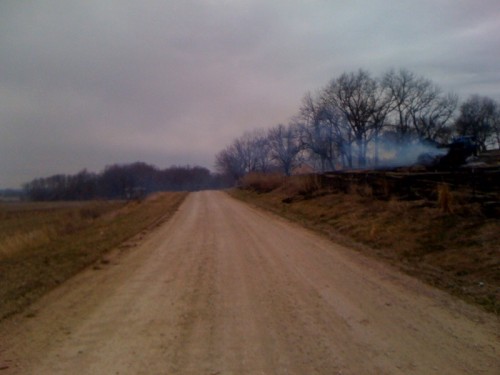 Burning on the way home. 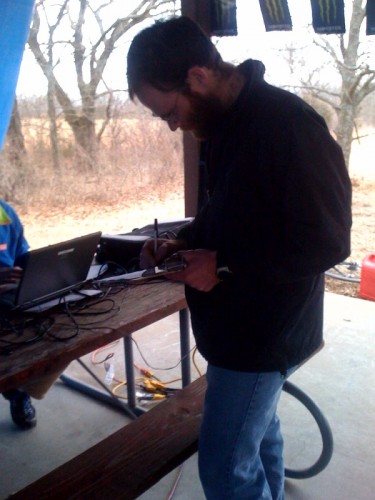 We thought we were late. We were done pinning numbers, when Mark Smelser shows up in jeans to register. He is a former Collegiate National Criterium Champion.