I’ve written about the “tactics” that the “PRO Teams” use to control the fields in criteriums. If you happened to miss it, at every criterium during a stage race the leading rider’s team rides a slow tempo at the front, riding the inside of the course and chopping/hooking the entire field every corner of every lap. It totally disrupts the flow of the race, as it is supposed to, but is so dangerous to everyone but the team leading. Here is a quote from Ben Jacques-Maynes from the Bissell Team talking about his team’s “tactic”. He was winning last weekends Merco Classic and was talking about the criterium.

“This is really an extension of our training camp,” Jacques-Maynes said. “It is actually much better than beating up on each other during training rides. The guys rode fantastic today. We didn’t want to ride a super hard tempo all day but just enough to stay safe. There was an 180-degree turn on the course so it was much safer to be at the front anyway, I was ninth wheel and I wouldn’t have wanted to be any further back.”

They didn’t want to ride hard, but just enough to be safe? And, he didn’t want to be riding farther back than 9 riders for safety reasons? And the 8 guys in front of him were on his team. How fucked up is that? Really fucked up! I’m not even sure why they had 9 riders in the race in the first place. It wasn’t the Tour de France. But that is a whole ‘nother rant. They finished 7 guys in the top 15 in GC. Some race. Maybe it was safe for him, but it was very unsafe for the other 100 guys. Try it with 200 riders. It is just stupid.

At Nature Valley a few couple years ago, when Tom Zirbel was leading, Frank Pipp or whoever happened to be at the back of the Bissell train would look back over his shoulder and tell his guys which way to swing to chop the field. This was about the worse I’d ever experienced. The problem that day for them was that Tom could not stay connected to his guys at the front, so he was 50 guys back in the field doing the brake/jump thing, getting wasted like the rest of us. It would have been so much better for them just to ride a fast tempo at the front of the race, taking the corners on a normal line with their GC leader sitting on.

I don’t have an answer for the problem. I don’t know how you make a team tempo the “correct” line of a criterium course at race speed, not “jack up the field tempo”. Maybe give one warning and then disqualify the riders one by one for riding dangerously. But, this tactic to neutralize all the criteriums in US stage races has to stop. It is too dangerous and on top of that, it is super boring to watch. Let’s get rid of any spectators that we manage to attract by showing them a team time trial instead of a criterium. And a slow TTT at that. 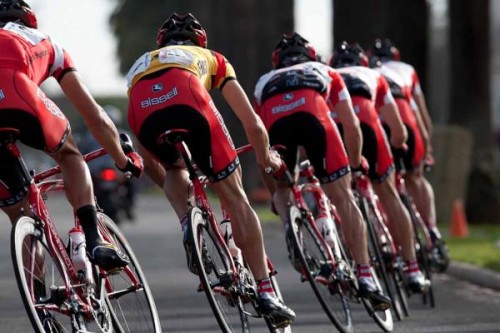 Criterium racing? I think not.