I’m always amazed when I get back home how much stuff I have. It is overwhelming. Even though I was gone for less than two weeks, I somehow get used to living on what is in my bag. And I don’t use everything in that. We can all get by with a lot less. I think that living more simple usually makes me more happy.

I read this on Cyclingnews.com yesterday. It is from Gianni Bugno, the head of the Pro Riders Union.

Bugno insisted that riders must be heard on the radio ban for safety reasons.

“Radios are important for rider’s safety just as much as say helmets are. The riders need them to be told of dangers up the road and in case they crash or puncture,” he said.

“We don’t want to impose the use of radios on anybody. If Philippe Gilbert or a team doesn’t want to use them, they don’t have to. But my members voted on the matter and have mandated me to represent them. I’m happy to do that so that I can help them have voice in the decision making process.”


I’ve written about my views on radio usage. I hate it. And this safety aspect is bullshit. But, this isn’t all the arguments. It is about simplicity.

Radios complicate the sport. Radios take away the individual riders freedom. To experience the race the way it should be experienced. I don’t think that the riders should be using a radio to tell their team director to call their mom, as in Andy Schleck’s case in last year’s TDF, and tell her that he won’t be taking any risks on a descent.

I’d hope he would be enjoying the simplicity of the race. The connection of his tires to the road. The crowds. Or lots of other things. I can’t say exactly what he should being doing, but I know he shouldn’t be calling his mom.

It’s the same as having a follow car on a training ride. I know at most professional training camps, the team directors and mechanics follow the riders on training rides. I would hate that. I do hate it. I’ve experienced it a few times and it really detracts from the riding experience. There is a beautiful simplicity of riding a bicycle. Out on a road on your own. Even when you’re riding through urban sprawl. You loose the individualism of being a cyclist when you have an automobile following you.

I’m getting close to the point to where I’m going to leave my cell phone home when I ride. It detracts from the freedom. I always turn the ringer off, but that doesn’t do it. Even turning it off won’t release me from it’s “weight”. It will always be there.

I know I don’t live in the moment as much as I did in the past. And if you don’t live in the moment, then you have no memory of the true experiences of your past. Radios, cell phones, ect. detract from the special moments in cycling. And, somewhat, of life in general. It is going to be a toil to sort it out, but I think the end result will make it worth it. 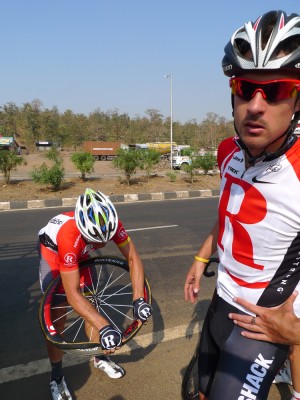 It amazes me that this is a thing of the past. A rider changing his own sewup on a ride in a foreign country. Guys don't realize what they are missing out on.

19 thoughts on “Back in not-so-simple Kansas”