I was pretty sore from Saturday. I’m hardly ever sore from a road race. I’m not sure what is going on. I think since I have so much congestion in my lungs that my muscles are always being oxygen deprived, even when I’m riding easy.

The course on Sunday was much more challenging than Saturday. I’m positive of that. That being said, I was talking to Dave Wenger and Andrew Dalheim after the race with and they said that the course is easier in the counter clockwise direction. Those guys are both good bike riders and their opinion really surprised me. It’s not like we went into a in depth discussion about it, but the selection of the race was made at the top of a fairly hard climb, lap after lap. You either had it or you didn’t. You could see what was happening and you either responded or not. Not like the selections of many other road races.

Anyway, I am okay happy with the results yesterday. I was feeling pretty weak and shitty before the start. If I was rating myself I would have given myself a 4 on a 1 to 10. Riding the first few laps wasn’t different. Sometimes at the top of the climb, where it keep going on a false flat, I would be 60 guys back struggling in line. But as the race went on, the group started climbing the hill slower and guys were getting popped continuously. I couldn’t understand it. Riding slower up the hill and the field was dwindling down to hardly anything.

The race was 15 laps again, just backwards of Saturday. The climb was a few 100 meter, steep pitches, followed by a long false flat at the top. The wind was much less than Saturday. Maybe that is why Dave and Andrew thought the course was easier. I don’t know.

With something like 8 laps to go, a big acceleration at the top split 10 guys off the front. I was a little boxed in, but finally made my way up to the break with Ryan Dewalt. So, a group of around 13 guys was formed. We rode a lap, maybe two and then on the climb, it split again down to 6 of us. I was never having any issues on the hill. My issues this past weekend has been pedaling on the flats or downhill. No power.

With two laps to go, Andrew Dalheim, Bissell, made a little surge on the hill. I wasn’t worried about him, but when Heath Blackgrove jumped, I knew it was all over. I probably should have tried to go with Heath. He wasn’t a superman or anything on the climb. But he was killing me on the flats. I’d been stuck a whole lap behind him pulling and he isn’t that big a guy and was going really fast. It was even worse when I had him coming through on me.

Heath bridged right up to Andrew and immediately shelled him. I was left in a group consisting of Stefan Roth, Lawson Craddock,LiveStrong, with Heath’s team mate, Christian Hemig sitting on. We rotated on the downhill section and caught Andrew at the start line with one to go. I felt pretty good still and wasn’t worried about getting dropped, but knew my sprint was suspect, at best.

At the top of the last pitch of the climb on the last lap, Stefan put in a good dig. Lawson didn’t even try to go and got shelled. Andrew got gaped pretty good. I was hurt too. Stefan kept going and I told him I needed a minute to recover. There was a U-turn right at the very top. I was third in line behind Christian and Stefan. Christian jumped pretty good out of the corner and that hurt me pretty bad.

We just had a couple miles downhill to the finish. We all rotated through, with Andrew dangling 100 meters back. With a km to go, Christian jumped and got away. I didn’t really care at the point, which sounds stupid, but was probably because I was so wasted. Stefan beat me pretty handily for 3rd. My legs were done.

The race wasn’t winnable by me. I was never going to be by myself at the end because I had no power. If the finish would have been at the top of the climb, it would have been different. I was mildly surprised how well I was going compared to everyone else. Compared to myself, I was nothing. But, it’s not like I smear these guys on a constant basis, so maybe I just feel really shitty riding, sitting and sleeping and I’m not riding so awful. I don’t know. I do know that sometimes I have good races when I have little to no expectations. Another one of those mental things that I’ll probably never understand.

Catherine finished 5th in a “field” sprint. Jen Purcell, Crumpton, won easily. The final group had only 13 left out of a healthy 40 women starters. Catherine messed up the finish again, but that doesn’t really matter. Getting to the finish in the lead group was the goal. She’s only ridden outside 15 times this year. Racing is painful in that situation.

Don and crew put on a great race. He has true passion for the sport. I think switching up the course direction on Sunday added a lot to the weekend. It is funny how much different a road can be riding it in the opposite direction.

Last night we stopped by a Rowing Regatta Party that Diane and George were going to. There was a big regatta down on the river yesterday and the after party was great. The food was awesome and people fun. Plus, lots of wine.

We’re going for a ride this morning in the warm weather and then heading North back to the cold. I’d like to hang here a few more days, but can’t really justify it. Well, I could, without much problem, but I’m not gonna. 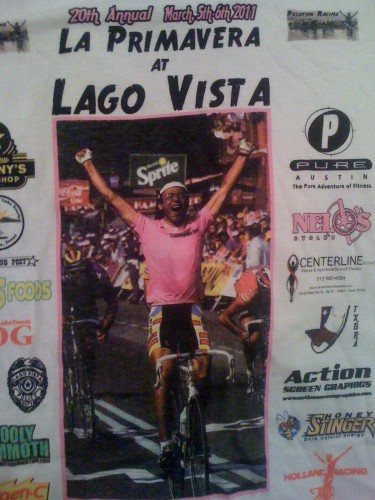 A keeper. Great tribute to Fignon. 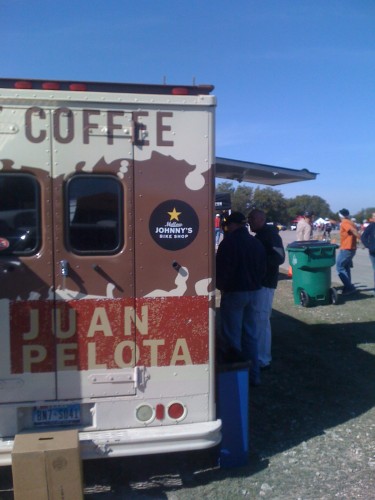 Every race needs one of these. 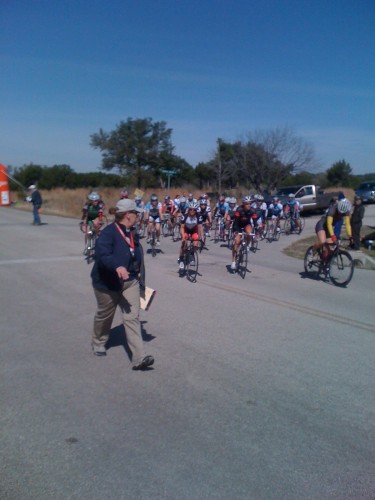 Bonnie was going to walk the first lap in front of the women's field. 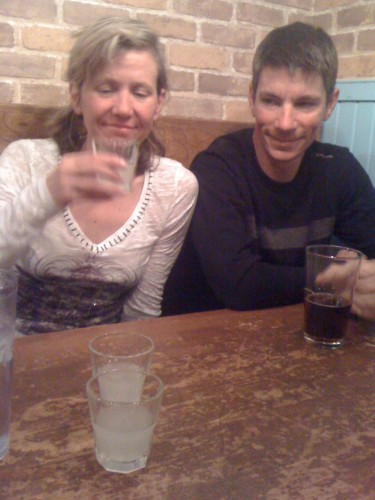 We stopped for a little pre-party refreshment. Catherine took advantage of the $2 drinks. 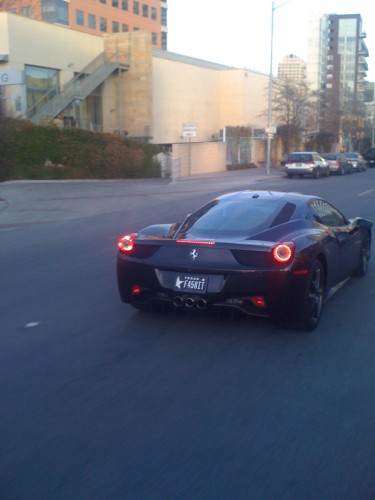 And we saw this guy driving through Austin. $250K at least.