First of all I need to say congratulations to Joseph Schmalz for winning Lago Vista. He is young, my former teammate and from Lawrence Kansas. I ride with him all the time and have know him since he was a pup (he still is a pup). It was a good win for him.

Yesterday went better than it should have for me too, but actually worse than it could have gone. That is what is so fun about bicycle racing. Unpredictability. The race was too long for me on paper. And probably in reality. 83 miles. I haven’t ridden that far in two months I’d guess. And it was the first race of the year for me. Everyone else has raced more. Lots. And I feel like shit. Which could be others problem too.

The wind was actually my friend. The wind was blowing hard and from a direction that it made it difficult after the top of the climb. I think that wasted a lot of guys. I don’t know. It seemed to me that everyone was riding worse than I anticipated.

The field here was much better than I’d thought it was going to be. Not a National Caliber field by any means, but lots of good guys. A few Pros, which is just a designation and not really much of an indication of how good of riders they are. And the normal Midwest strong guys I deal with throughout the season.

Bill took off within the first mile and eventually hooked up with Jonny Sundt from the Kenda Pro Team. It was nearly the right move for him. Eventually he was in a 5 man group, but Health Blackgrove bridged up and Bill got shelled on a steep pitch 40 miles in. I was pretty content and wasn’t paying as close attention as I should have to what was going on up front. I had the mindset of just riding around all day and never planned to actually race. That was not really a good plan, in retrospect. I think that was the reason that Bill got shelled too. He figured that the field was coming up and that he didn’t have the form to ride the whole day off the front. Which was wrong too.

Anyway, eventually 8 guys rode away. And there were only about 40 guys out of the original 85 left. I can’t exactly remember why, but decided to jump on the descent and got away in a group of 7. We weren’t doing anything special. Not really going very hard, but after a lap, we could see the break ahead. At the time, I wasn’t that excited about riding up to the front group because I didn’t feel like racing again. By that I mean I liked the steady rotation we had going and didn’t have any jumps in me at the time.

But, it didn’t matter, because they got going faster and we never saw them again. I thought we were pretty set, but with 3, 5 1/2 mile laps left, the field caught us. But, the field only had 8 guys left. All pretty good riders. I didn’t know the guys I was originally riding with, but knew pretty much everyone that bridged up. I thought that it was not good.

So the last 3 laps we kind of raced. I got away a few times. By the way my legs and lungs felt, I knew I was going to get smeared in the sprint up the hill. I figured both the Kenda guys would beat me, plus Carlos, Cagle and Waddell, plus a few others. On the last lap on the bottom of the climb, I took off and bridged up to a guy riding for the US Air Force. He had been riding strong all day. Not so smart, but putting lot of power out. He told me he was cramping and I told him to tell him if I was going too hard. It didn’t matter. At the top of the climb, everyone came back.

I got on the back of the Kenda leadout going downhill into the uphill sprint. Chad Hartley was leading out Lucca Damiani. I was toast. I ended up 6th in the sprint and 14th on the day. Damiani won the sprint. I couldn’t hold his wheel going up the hill. Ryan Dewalt, from the East coast finished 3rd. He’s on my Redlands Team. I didn’t really know he was here. I’ll have to go over and say hi before the start today.

So, I didn’t think that I was going to finish before the race, so it was okay. But, I could have jumped up to the front group when it formed a couple times without much trouble. And I wouldn’t have gotten dropped from that group, so in retrospect it was worse than I should have done. But, that is the deal with having a mindset before you start. If it’s not a good mindset, your results suffer. If it is a good mindset, usually the opposite occurs. That is the mental aspect of athletics. Pretty cool really.

Catherine ended up 6th in the women’s race. It was a better place than she deserved, but a worse place than she should have gotten. Weird huh? She screwed up the sprint. It was her first race of the year too, and she was suffering on the climb and in the wind, but persevered to get to sprint for 1st. Normally she wouldn’t have jacked up an uphill sprint that badly, but she was probably in the wrong mindset and missing some oxygen to her brain at the time.

Today we race the same course except backwards. It is going to be a much harder course. The climbs are going to be much steeper, but shorter. I predict carnage, but that is kind of what occurred yesterday. It is going to be uglier though. I am pretty toast this morning, which doesn’t really mean anything when it comes to racing in 5 hours. We’ll see. It should be fun. 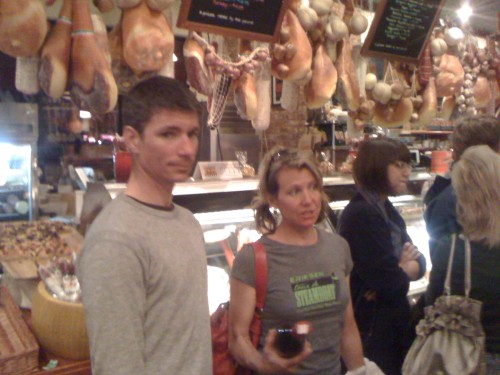 Bill and Catherine waiting at Mandolo's to eat. 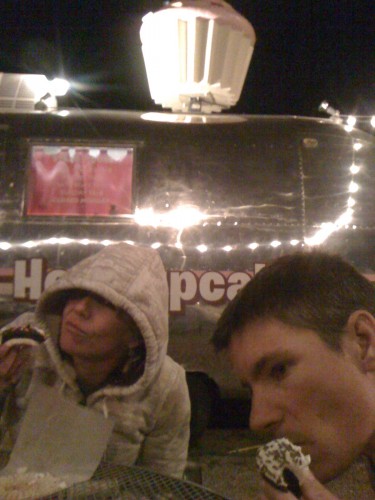 We went to South Congress for dessert at the Cupcake Trailer. 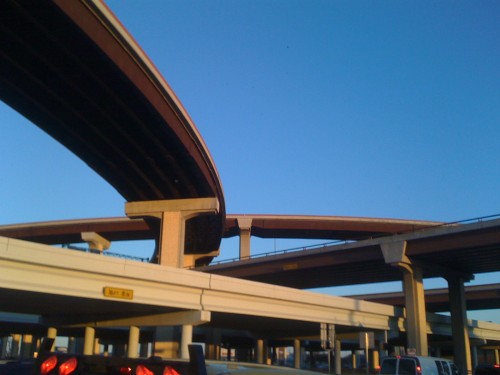 The overpasses in this town are crazy, but it doesn't seem to alleviate the traffic jams.