I had a pretty strange encounter yesterday flying to NYC. Last minute, right before they closed the door to the plane, this woman comes stumbling in. She was wearing high heels and a cocktail party dress. She happened to be sitting across the isle from me. She had a roller bag that she couldn’t come close to lifting into the overhead compartment, so I helped her. That was the start of a very weird 3 hours.

I haven’t decided if she was drunk, stoned, both or maybe somehow mentally incapacitated, but she might of been the most inept person that I’ve ever met. She couldn’t do anything on her own. She couldn’t fasten her seat beat, turn her iPod off, buy a drink. It was amazing.

She told me she was flying to New York to meet up with a “blok”. She had flown a British guy, that she had met on the internet, over to New York to hang with for the weekend. She said that it had cost her $500 for his ticket, plus $900 more for her package, so that it was going to be $1500 for a “piece of ass”. She said he had a very sexy accent, so it was worth it.

She said that she already had three drinks at the gate, a bloody mary plus two shots of tequila. She didn’t have a credit card, so couldn’t buy a drink, so I told her I could use mine and she could pay me. She insisted buying me a drink. We got talking and it turned out that she had missed the same flight the day before. It didn’t surprise me at all. I’m not sure how she got anywhere.

She tried to stand up when the plane was landing. It never ended. She kept asking what time it was. In Kansas and in New York. She finally tossed a $50 bill over to me and told me it was a tip. I said, no, it was fine. This went back and forth a few times and I finally just kept it. Then she asked me if she could take me to my hotel. She’d pay for it. And if I wanted to met up with them for dinner that night. There was no way I was going to do either, but in the back of my mine I was thinking it might be super interesting.

I got her bag down and she wanted to go out of the back of the plane. The stewardess told her at least 3 times that she had to go out the front. She said “bummer”. The stewardesses thanked me for “taking care” of her and laughed. I followed her up the jet way. She was dragging her roller bag sideways, not using the wheels or the handle. I showed her that the handle extended and how it worked. She acted like I’d just invented the wheel. She couldn’t believe it. But, she could barely walk with her heels anyway.

I think she was an exotic dancer that just got off work. And the day before she didn’t quite make it.

Spending all day in NYC yesterday, I saw some pretty strange and amazing stuff, but nothing to come close to matching her. 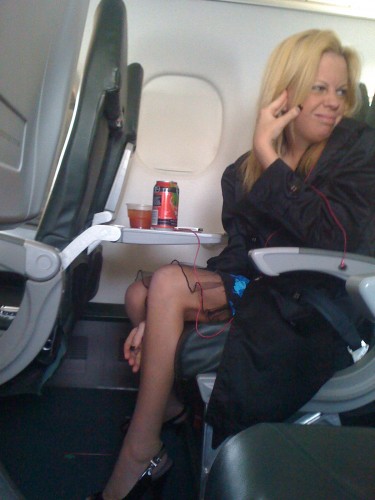 Here she is, just wandering her way through life. Maybe it's a blessing.

15 thoughts on “The Best Part of Traveling”