I got into a discussion with a bunch of guys about the “new” formation of domestic elite teams for the National Racing Calender. I know this doesn’t really have much to do with many riders and not many people reading this even know anything about it or care. But, after thinking about it for a couple days, I think it addresses a bigger issue.

The deal is that USAC has made a new designation of Elite Teams for NRC races. You receive this designation by paying USAC $250 and submitting a list that has the names of up to 25 Cat. 1 riders on it that you want to be able to “earn” points at NRC races throughout the season for your team. Here is a link to a Velonews article that kind of explains the idea.

The main complaint I was hearing was the $250 fee for keeping track of something that they did already. I agreed. So, I called Micah Rice, the National Event Director at USAC and talked to him for awhile about it. Micah and I go pretty far back. He ran the Jittery Joe Team and before that raced, so he is the right guy to have in the position at USAC. At least he understands the issues. But, I really didn’t get a great explanation to the question of why the money to do something that you’d think would be done automatically.

Why have a series of races that you call the National Racing Calender, but don’t score all the overall points unless each participate pays extra money to have their points tallied? It would be like racing the NORBA Series, but only scoring points if you paid an extra $100 for them to keep track of your points. Or racing UCI Cyclo-X events in the US, which is the National Cyclo-X Calender, and only getting the points scored if you paid extra. Can you imagine that if Major League Baseball couldn’t keep track of who won games throughout the season. Or, the PGA couldn’t score the Ryder Cup points, a selection series that they came up with themselves. I could go on and on. It seems just wrong.

I asked Micah and he said that USAC had hired someone exclusively to keep track of points in the National Racing Calender and maybe other series. I got the feeling that the fee was to offset some of the salary of this guy. I asked him how many teams he thought would register. He guessed around 25. I’m guessing less. It would surprise me if there are 25 teams in the US with 8 Cat. 1 riders on them.

I checked out the 2010 National Racing Calender points from last year and it is all jacked up. I looked at my TradeWind Energy Team points. From what I can tell, Brian Jensen had 38 points and I had 21 points, but our Team total was 33 points. So obviously, I might not know how to add the point total or the total points are all jacked up. So, if the later is true, then USAC needs a much better way to keep track of the points.

But, I can’t agree that charging amateur teams a $250 fee to keep track of the points is the correct method. It is pretty much bullshit in my opinion. We’re not going to do it. And we won 2 NRC races last year. UCI teams don’t pay anything. So if a foreign team registered with the UCI comes and races NRC races, they will be scored. But, the US elite teams, which each rider paid USAC a license fee, have to pay again. It seems just wrong.

So, the bigger issue is if we, as riders, are going to be nickel and dimed by USAC for services each and every time they decide to implement “new” services. Or upgrade the services they already have. I’m sorry if they have a hard time keeping track of their own race series overall results. DON’T have the series if you can’t score it. Pretty simple. And quit making the sport more expensive than it already is. Between gasoline prices, airline charges and entry fees, riders have enough to deal with. We shouldn’t have to be paying our governing body extra for the basics.

The point of this isn’t to slam USAC about this “new designation”. Micah and the USAC have good intentions here. But, I don’t think that USAC realizes as they make all these minor errors, it alienates another segment of their support. Micah said that the organization (USAC) needs to become more professional as it grows. This isn’t the way. 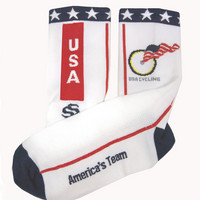 Maybe all the guys I was talking with would be appeased if USAC gave out a pair of socks with the $250 registration fee.