I have it and I’ve only ridden 2, yes, 2 days inside. And, pleasantly surprising, both of those times it hasn’t been like sticking needles in my eyes. I’ve been renting movies and just riding. Pretty hard actually. Riding indoors is always hard mentally though.

There is a ton of snow here, as just about everywhere else in the country. I don’t know the reason exactly, but there was virtually no plowing of any roads the first 24 hours of snow. Must be no $$$. It is pretty sad when city services can’t do something as simple as remove snow from the major streets so people can get around and go to work. I wonder if anyone takes into account how much revenue it costs the city in the long run by having everyone stay in their houses and not work or spend money.

Today I’m going to ride outside on my MTB bike. There is nothing like a little/a lot of snow and ice to keep your bike handling skills up to par. It got down to way below 0 last night, so it might take a bit to warm up today. The high is supposed to be around 20 today, so if you go by the winter rule, I should get a least 20 miles in. The winter rule, at least mine, is one mile for one degree temperature under 40. So, 28 degrees, at least 28 miles. It’s about as long as your extremities can handle it before they fall off. My fingers are having issues at any temperatures anymore. I use the rule mainly as a minimum mileage anyhow. Sometimes I ride 40 miles when it is 15. It’s all a matter if there is sun out, whether it is damp or wet and motivation, of course.

Yesterday was Groundhog Day. An early spring is on the way, if you believe the little guy. Do you think? One of my favorite movies is Groundhog Day. Bill Murray and Andie MacDowell. We have a dog named after her. I grew up with the exact same alarm clock that is so ever present throughout the movie. I like the movie because it is thought provoking. What would you do if you lived the same day over and over? Bill Murray becomes a physician, learns to play the piano and learns what is important in life. Pretty great movie, that could qualify as a film.

Sometimes bike racing becomes a little like Groundhog Day. Not in a bad way. In a good way. One of the best things about the sport is that there is always the next race. And we get the opportunity to compete way more than other sports. It switches up some, but I probably average close to 80 race days per year. I think one year, way back, I had close to 125 race days. That involves a lot of stage racing and a lot of travel. I can’t think of another sport which you can compete so often, if you desire.

I’m getting lighter since I got back from Europe. I think I’ve just be lazy eating. Oatmeal and tea for breakfast. Not much lunch, then I try to eat dinner, but that has been sort of hit or miss recently. Maybe I’ll be light all season. I doubt it.

I need to put my road bike back together sometime soon. I swore I wasn’t going to bastardize it during ‘cross season, but I still did. I need to go somewhere warm. This winter stuff, snow shoveling in particular, is getting quite old. And I’ve only been in it a little over a week. Man, am I a pussy.

Boy, this is just turning into a wandering ramble. I guess that is what happens when you have cabin fever. 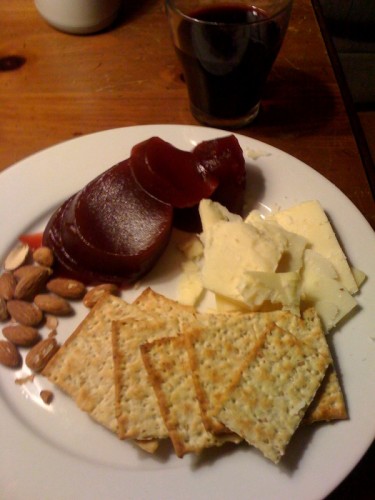 Dinner last night. Pretty lazy. I did eat some olives later though. 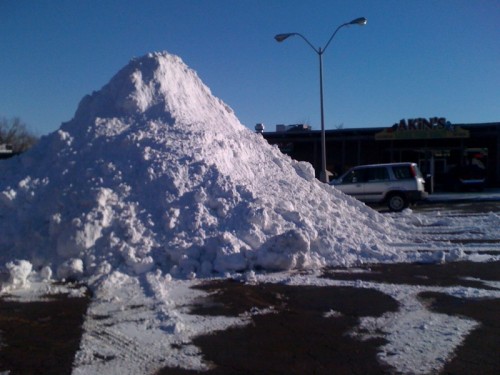 This isn't normal here in Topeka.