I have. Now. Yesterday was a Comedy of Errors. Yesterday made the day before look like a vacation. Yesterday pretty much sucked. I’m pretty sure that yesterday has to be in the top 5 of all weird days of my life.

Yesterday started at my now normal 5 am, with a little dog surgery. Then the engine of my van caught on fire while trying to get it into the garage. But the highlight of the day was discovering that I am missing 3 automobiles that I previously had.

I have been meaning to write about Jeff. Jeff is a desert storm vet. He has lived in a house I own here in Topeka for 2 1/2 years. He is/was my “renter”. But, he never paid rent. Not one month. He got behind the first month and, I guess, could never catch up.

I liked Jeff. He is raising 4 step kids. He seemed pretty honest. Other that nothing he ever said about money ever occurred, he seemed pretty nice. I didn’t really care that much about the money. I cared some, but not enough to confront him.

I think I justified Jeff by thinking it was a charitable thing. A poor black man, who was disabled through the Iraqi war, raising kids that aren’t his. And his kids are great. But, things went downhill fast today.

I got a call in the morning by the Gas Service Co. that they had a disconnect order for my house. I asked if it was because of lack of payment, but it was because a service disconnect had been ordered. Jeff was moving. I told him to leave the gas on.

I drove over to Jeff’s only to find no one there. There were no footprints in the 8 inches of fresh snow. There was a lot of furniture on the porch, so I figured they weren’t gone yet, but weren’t living there.

Behind this house is a detached 2 car garage. With 3 of my cars in it. A 1970 Saab Sonett, a 1983 Honda Civic S, and a 1986 Dodge Caravan (manual transmission, 4 speed). I noticed that the door to the garage was open. I had a padlock on it last time I saw it, which hadn’t been for awhile. Anyway, I go look in the garage and all three cars are gone. And there is a bunch of other stuff being stored there. Crazy.

There has been a ton of stuff in the paper about people ripping off metal to sell for scape. There is a crime spree by some guy that is going on top of commercial buildings mainly, and stealing the copper out of the rooftop air conditioners. And three city employees just got caught stealing metal from the city and recycling it. I thought you were supposed to have the title to scrape a car, but this is Kansas.

So, I’m pondering what to do here. Report it to the police? Forget about it? Civil court? Maybe just rack it up as a life experience? Pretty strange day. 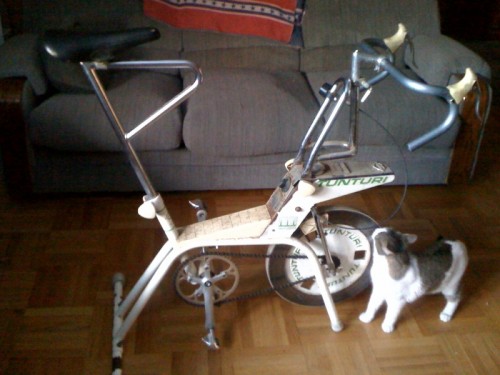 A highlight of yesterday was riding indoors. I know, I usually hate that with a passion. But, yesterday wasn’t so bad. I rode for and hour 15 and had pretty unbelievable power. For me at least. I’ve had this Tunturi ergometer for nearly 30 years. It just uses spring tension for wattage, but that is accurate enough for me. As long as it is consistent, it doesn’t really matter what the numbers are.