Today didn’t go quite like I had hoped. But, there aren’t any do overs here. There are a lot of could have, should have, would have things spinning through my mind. I’m trying to dismiss them. Time will take care of that. I made a ton of mistakes. Not big ones, but a lot of little ones that add up to 6 seconds. That was the gap from me to the winner.

The race is sort of a crap shoot from before the start. The call up is so important. Every race I watched, the best Belgium guys happened to be “randomly” lined up on the front row. That was the case in my race too. I was called up in the 4th row. I squeezed my way up a 1/2 a row. No one was paying any attention to the grid. I got an okay start. I got into the sand somewhere in the top 15, passed a few guys on the beach, but got jammed up again in the next sand section coming off the beach. I chased a front group of 10 or so most of the first lap, not being able to pass anyone on the tight back section. When I got to the road section after a lap, I jumped by 5 or 6 guys, but was bummed to hear 4 laps to go. That would have been a little over 20 minutes.

So, I got up to 4th on the next lap and was chasing a group of 3, but they split up into one single Belgium guy and the other 2, the Beligium National Champion and the Dutch National Champion. I was about 20 seconds off 1st, when I caught up to the other 2 just hitting the line with one to go. The Belgium guy went past the Dutch rider and I followed him. I rode badly through the sand that lap and the Dutch guy slammed into me from behind when I crossed up. I got going and caught up to the Belgium guy pretty quickly and passed him. We were 15 seconds down and I figured that I had nothing to lose by just going hard to the line. I was less than 5 seconds back in 2nd with 1/3 a lap to go, with the Belgium National Championship sitting on and we entered that last sand pit. I sort of bobbled, then got hooked pretty good and came off my bike. It was over then. I had to run the last 20 meters and knew I wasn’t catching 2nd, let alone 1st. So, I just rode to the finish line.

I can’t say I’m pleased with the result. I was planning on winning. I wasn’t having a great day. Maybe a 7.5 on a 1 to 10. But, that form should have been good enough to win this race. When you’re only racing a 30 minute cyclo-x, you can’t afford to give up much time anywhere. I did. In little bits and pieces. Plus, I didn’t ride the race like it was 30 minutes. I rode it more like it was going to be 45 minutes. Or maybe an hour. Right now, I can’t recall a time in the race I was really winded. That is just wrong. But, like I said above, the race is over and the results are the results.

Kevin Hines, who was racing my race, had an awesome finish. He was officially listed as 6th, but I think he finished 5th. Anyway, he was lined up 3 rows behind me and only finished a minute back on the winner. I would have been hard pressed to do that. He must be great at passing guys.

The American men all had pretty good showings here, but not as good as I had thought. I didn’t realize, fully, how imperative the start was. I realized it was pretty important, but not vital for winning. Maybe for my race it wasn’t vital. But, if I would have started on the front row, I can’t imagine the results not being a lot different.

Peter Webber finished 4th and Brandon Dwight was 6th. Jonny Bolt was 3rd also, which he might not be too pleased about either. Don Myrah got a horrible call up. He passed where I was standing 1/2 a lap into the race in 50th or so. He rode up to the top 15 I think, but didn’t see the results. He had no chance from where he started.

I hope in the US next year someone comes up with a better way to line the fields up at Master’s Worlds. This wasn’t a “random” line up. If we use the Belgium method, then I hope the UCI keeps the status quo. But, for fairness, we probably should call up the top finishers from the previous year and then ride a time trial like we did at Nationals in Bend this year. I can’t think of a fairer method right now off the top of my head.

A lot of stuff went pretty wrong on this trip. And, I’m usually good at making due. That is something I pride myself in. But, I’m going to have a hard time letting this one go for a bit. I spent a ton of time concentrating on this. There are tons of positives from this trip. Too many to list. You know, this is the first time in my life I’ve raced a cyclo-x in Belgium. I never thought of it, but it isn’t bad to add to my palmares.

So, I’m going to Brussels tomorrow to take Trudi to the airport. She has to go back to work in Spain. Right now, I’m going to meet up with the Kansas City crowd and drink a lot of Belgium Beer. 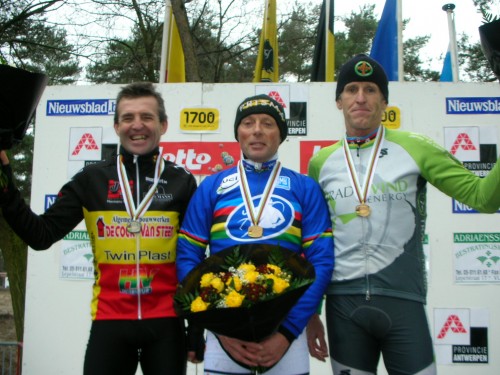 Two Belgians and me. 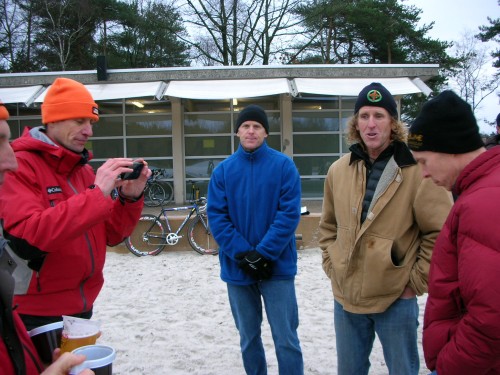 Standing around afterwards with Jonny Bolt and Kevin Hines doing an interview with Peter Weber. 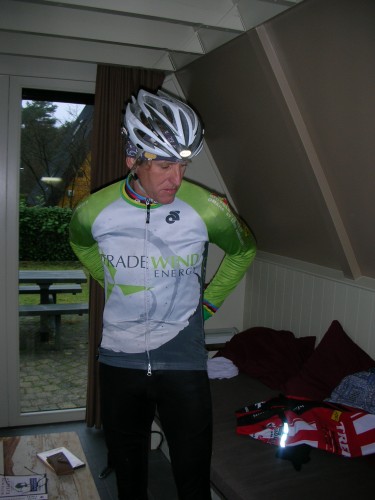 Getting ready in the cabin before the start. 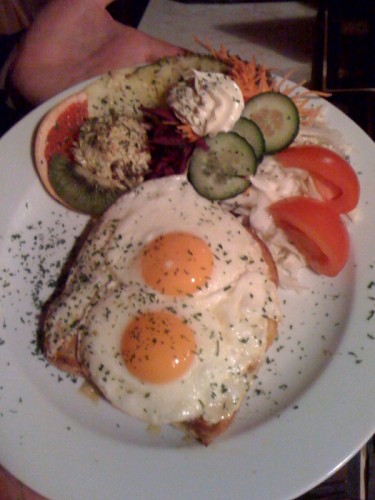 Don't see this much for dinner in the States.

16 thoughts on “Mol, Belgium – World’s Thoughts As of Now”