Well, yesterday wasn’t officially a race. Just a qualifying time thing. Today was a race, but luckily for me, not that stressful. The weather wasn’t conducive to being warm today. Really wet and temps hoovering just above freezing. I was nearly completely waterproof pre riding the course at 7:30. It was pretty sticky. It took lots of energy. But the moisture throughout the race and later on during the day made the course much faster.

Today, the main issue were fingers. My hands were numb early into the 2nd lap and barely stayed usable the last 30 minutes. I rode most of the pavement sections swinging my arms trying to get some blood flow to the tips. It didn’t seem to work. Here it is, 10 hours later and my fingers are still tingling. I’m not sure what would have worked to keep them warm. I have some awesome neoprene gloves, but didn’t want to use them. I should have.

My TT win from yesterday gave me the last slot on the front row. That was good. My whole nervousness from last night revolved around clipping in my foot at the start. That went alright. I wasn’t the fastest off the line, but it wasn’t a problem coming off the pavement in the front. Most of every other field has crashed about 50 meters into the first muddy stretch, so I wanted to be in control of my own destiny. I glance back coming around the pit and had a few bikes lengths already. I didn’t really even have to punch it and the gap kept growing.

Not being over confident, but about 1/2 a lap into it I was pretty sure of the result. I hadn’t really went 100% and I had a comfortable margin. I kept going pretty hard for the next two laps just to get a big enough gap to account for a flat or mishap. The last couple laps I was coming upon lapped guys and took it pretty casual.

Kevin Hines, last years winner, crashed the first lap and was way back. He charged back to 2nd place, so that is at least something. I’m sure he isn’t happy with the result and I would have loved to see if he could have made a race of it.

Steve Johnson, CEO of USA Cycling, awarded the jersey and medal. He asked me, in a humorous, very nice and personal way, if I had any more complaints right now. I said sure and that Wayne (Stetina) is my avenue for those. He told me that Wayne has been CC’ing Steve with our banter. Funny.

The race of the day was the U23 race. Zach McDonald killed it the first lap while Danny Summerhill got knocked down or something. Summerhill came from behind and caught Zach when he hit a spectator and then they raced nearly the rest of the race not more that a few bike lengths apart. Zach was by far, the better bike handler and Danny seemed to have just that much more horsepower. I don’t know if Zach had a problem the first 1/3 of the last lap, but Summerhill put a good 100 meters into him on the technical side and it was over. But, very good cyclocross racing was witnessed.

If you have never been to a current US Cyclo-X National Championship, you must put Madison, Wisconsin on your schedule for next January. It is the best bike race spectating around. Hands down.

I’m racing the Elite race tomorrow afternoon at 3:30. I hear there are 70 something guys with UCI points and then it is random after that. I don’t really know how many riders are entered, but my start position is going to be the worst of any cyclo-x I’ve ever started. By miles. There is a 100% chance there is going to be a huge pileup in the first 30 seconds of the race, so I hope to be somewhere to control my destiny a bit. That might be wishful thinking, but that is my whole game plan as of now. I am never going to be able to attain a result that I am going to be happy with, so I have to look somewhere else to get motivation for the race.

The crowds are going to be out of control tomorrow, so I am looking forward to riding around through them. And let the primal beat of the drum corp resonate through my body. 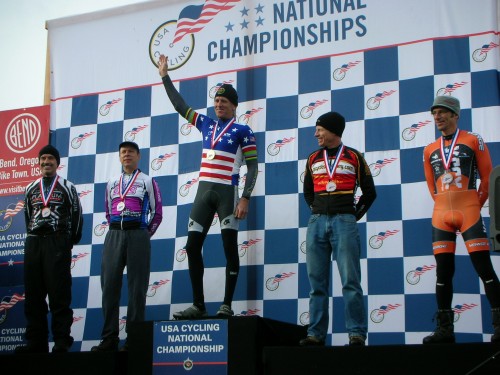 Podium. It was a couple hours after the race, so the 2nd and 3rd place attire is excusable. 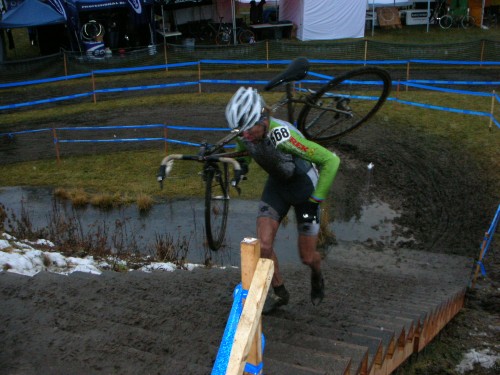 I was taking 2 steps at a time the first 3 laps and then got lazy the last couple. 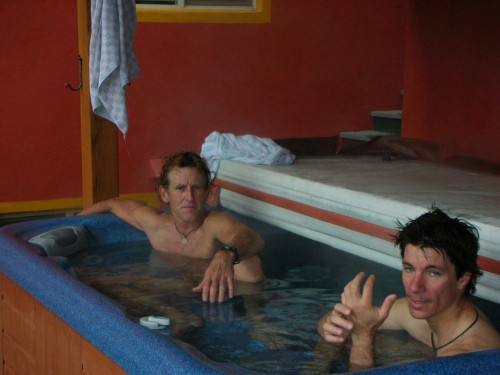 Bill and I before the awards ceremony. There is no way I could stick my fingers into the water they were so hurt. 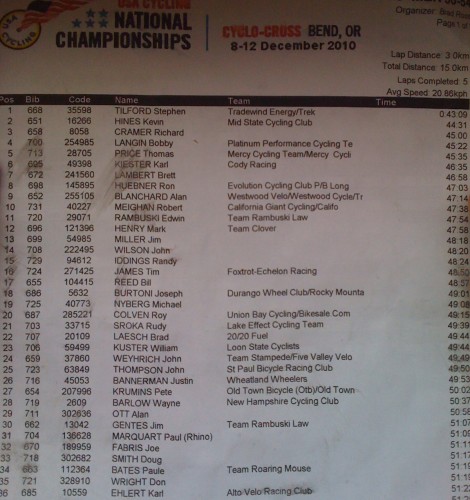 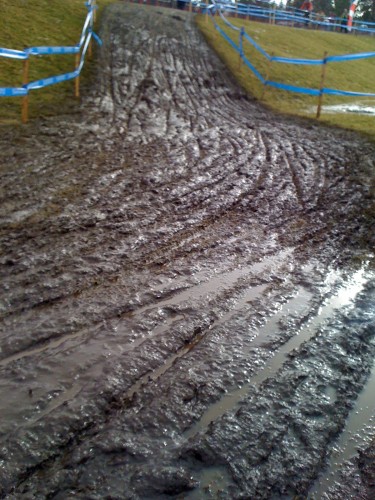 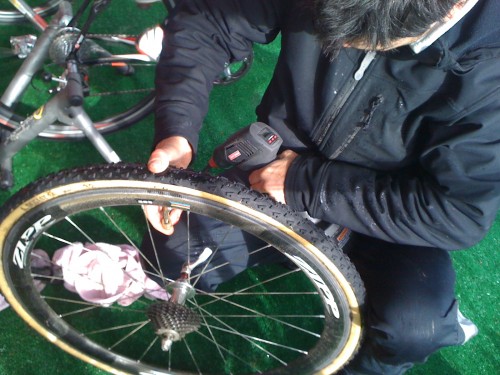 This is a super cool tire inflater I saw over at the Specialized camp. It is from Craftsman and I've was told costs less around $50. Inflates tires to 160. Cordless. 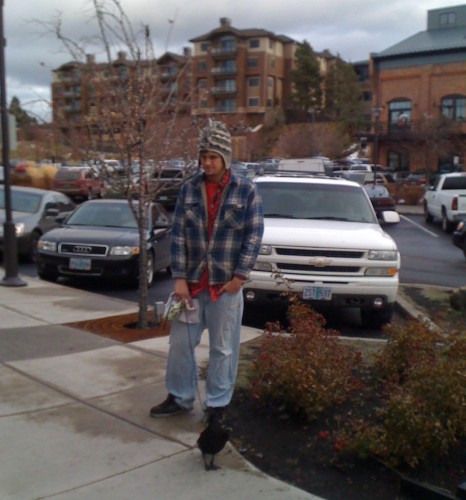 I saw this guy walking his duck. Only in Bend. Okay, Boulder. Santa Cruz, ect.

Here are a couple interviews after the race.

4 thoughts on “Cross Nationals – Two down, One to Go”