Yesterday I was out for an hour ride and a guy in a Terminix van drove by Bill and I, who were riding 2 abreast, and then proceeded to brake and move over to the edge of the road. He was turning left about 20 meters after he passed us. He was definitely trying to herd us to the edge of the road, but he was doing it subtly. If he hadn’t moved over the final 6 inches, I probably wouldn’t have slammed my fist into the side of the passenger door and flipped him off.

Here in Kansas, we don’t encounter too much road rage stuff. It’s way more prevalent in more congested places I ride. I think the more congested the area is, the more frustration taken out on cyclists.

I haven’t had a ton of problems with altercations with irate drivers. I’ve been hit a couple times by passengers, had bottles and cans thrown at me at 50mph and the other normal things that we all encounter out there on the roads.

Here in Kansas the law is that cyclists can ride two abreast at all times. The most commonly heard phrase when someone is doing something really stupid in a car concerning cyclists is “ride single file”. I have no idea how many times people have shouted that to me when I’m out riding. Alot. It is strange. That phrase is mainly only used for bike riding. I think the only other time I’ve heard it was when I was in elementary school and our class would be walking in the hall or somewhere in a group and the teacher would say to walk single file. But, it is predominantly used to tell cyclists to get off the road.

The few times that a car stops and the guy starts ranting, I’ve usually had a copy of the Kansas law concerning bicycles in my spare tire jar. If I can get the guy to read it, it is amazing how their mindset changes. They are irate and mildly violate because they think that I am breaking the law and they are going to be the de facto police and enforce their misconception. When they realize that they were wrong on their initial thoughts, they usually become apologetic and “nice”. I think it is so weird. Even if we were breaking the law when we were riding two abreast, it seems to me that the “penalty” that many drivers come up with, trying to physically force you to ride single file, is so much more worse and dangerous than the originally “crime”. It would be like accelerating at a J-walker as they tried to cross the street. Who would do that? No one I hope.

I think the main problem is the misconception that it is illegal to ride two abreast. I’m not sure where everyone came up the the notice that cyclists were supposed to ride single file. But it is a notion that is accepted throughout the country. I’ve been pulled over a few times by police here in Kansas after we failed to ride single file.

One time in Lawrence, the cop pulled us over and said that he was going to ticket us for riding two abreast. He’d already called for a superior by the time I pulled out the law to prove it was fine. When the superior showed up, he changed his story and said we were riding all the way to the center line, 4 abreast. That pissed me off more than anything. The original cop had told us that the whole “incident” was on video. I told the supervisor to go back to the guys car and look at the video. And the the officer lying to him, and us, was more of problem than a few guys out riding their bicycles two abreast, even if it was against the law. He explained that they have problems with groups of riders hogging the whole road and that they were supposed to be putting a stop to it. Whatever. My point is that even the police in most places don’t know what the law if concerning cyclists and their rights on the roads.

I’m not sure where I was going with this. Riding single file is more dangerous in a lot of situations. I’ve found it that if you wave the car by when it is safe to pass, that seems to alleviate some of the “tension” that has built up as they were slowed down. Other than that, lets just try to get along the best we can. It is only going to get more congested everywhere. 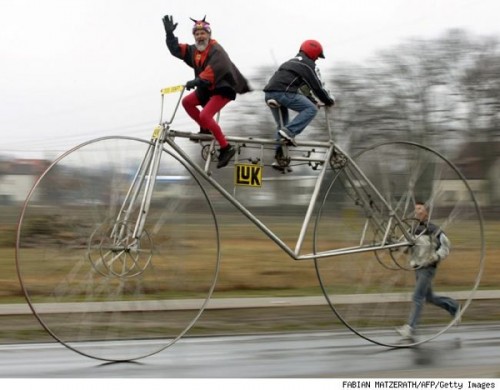 Maybe we should ride bikes that are bigger than the cars. 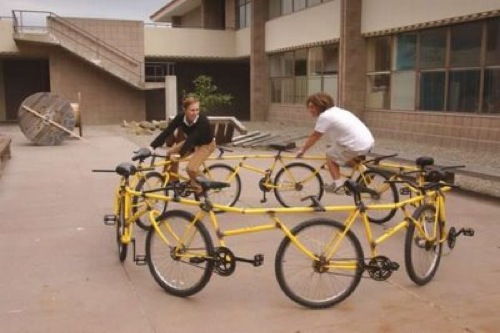 Another way to avoid traffic is not to really go anywhere while riding outside. 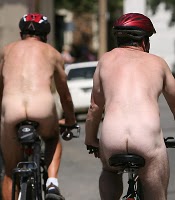 It would be safer just to ride without clothing. I don’t anyone would want to run over someone with no clothes on. They would seem “too exposed”.

5 thoughts on ““Single File”…ie get off the road!”