First of all, I have to congratulate Joseph Schmalz for making the European Cyclo-X trip for U23. He’s been getting better and better each year and he’s barely 20 years old. It’s super expensive to do this trip. USAC pays zip ike usual. He’s been getting to the USGP races, but this one is going to take some help. So, there is a link at Joseph’s blog that you can donate to help him offset expenses. Click the donate link and it will take you there. Anything is appreciated. You can also just click the link on the right to Joseph’s Blog.

I saw that California Bicycle Racing has a new rule that doesn’t allow anyone that has every been suspended for a doping offense to compete ever in their events. There is a pretty good banter started here on their facebook page. I’m not familiar with the California Bicycle Racing Org., but I can’t say I disagree with their philosophy here. My only problem is the blanket rule, no exceptions. That means Andrew Crater can’t race there because he was suspended for a day for smoking pot. Doesn’t seem right. There should be a rule to differentiate between the performance enhancing drugs, EPO, HGH, steriods, etc. and the stupid stuff in my opinion.

I saw that there are 122 riders with UCI points in cyclo-x in the US. That is a ton. I’ve been consciously trying to keep my name off the list. Here is the list.

Speaking of ranking, K-State and KU are ranked 4th and 6th respectively in the NCAA Division 1 basketball ranking. K-State is playing #1 Duke tonight. Should be interesting.

I got a couple emails from people asking me about the etiquette for the podium. Where do you learn it? What “rules” apply? I don’t really have specific answers for that. Just liberal guidelines.

Here are the ones I can think of off the top of my head. If you won, make sure you congratulate the other guys up there. It’s only sporting. The guy at the top of the podium, ie the winner, is normally the only one gets to put both his arms up. The guys are either side should just put up one. Preferably their outside arm. If the guy that won grabs the other guys hands, then it is kosher for the 2nd and 3rd place guys to have both arms in the air. You should try to only wear you cycling clothing to the podium. Team kits. There aren’t many excuses for this rule. Two that I can think of-The awards ceremony is way, way too long after the race. And, it is a small race and it is wicked cold out and you don’t think anyone will be there watching, let alone taking pictures. And, of course, make sure you share the bubbly. 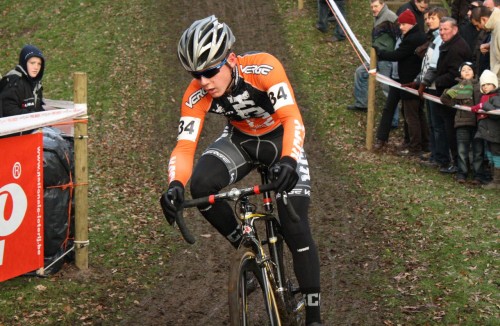 Joseph doing what he likes to do. 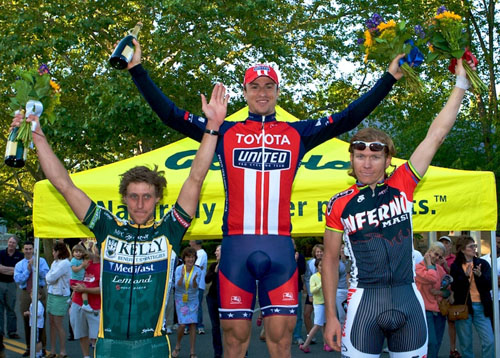 Example of bad podium etiquette. The Kelley Benefits guy is hogging all the attention from the winner. 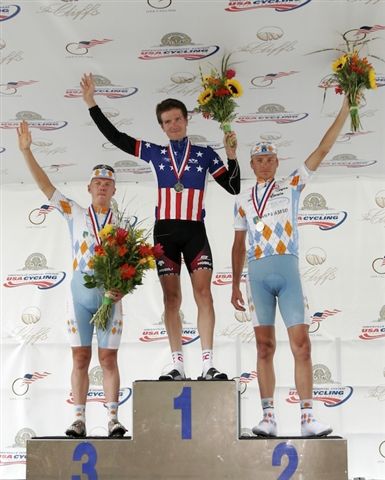 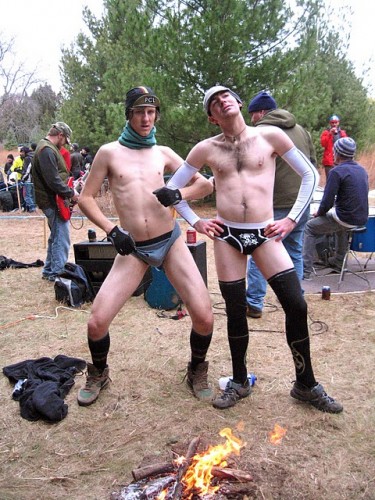 Top of the hill from the Nebraska CX Championship race on Sunday.