The race last night it what a cyclocross should be. It had rained nearly 2 inches on Friday, but I thought the course would be good. It was good, but in a cyclocross type way. The race was held at the raceway here in Topeka. It is famous for its fast drag racing track. But, for the cross race, the course went into the dirt track. The infield of the dirt track, which was mud. That defined the night.

I got there and watched field after field run the whole mud section. A few hundred meters. It reminded me of the Princeton UCI race from a couple years ago. But, the mud wasn’t at all the same. It was super sticky, clay mud. Mud that built up on your shoes with every step. I wasn’t big on even trying to run that far every lap. I’ve run twice this year and that was a couple months ago. Brian and Bill decided against racing. Brian had a brand new Colnago cross bike that he didn’t want to destroy and Bill only had one bike, which he thought was one bike too little.

I went out between races to pick out where I could ride and when I’d have to run. To my surprise, there was no running. I rode at least 6 laps and didn’t have to dismount once in the mud. There were two keys to staying on the bike. Never loose your speed. And use a huge puddle in a double track a 100 meters after the muddy section to clean your wheels. I rode through the water for 30 meters and used my hands to clean my wheels. I did make two bike changes during the race, but I really didn’t need to.

So, I was the only one to ride the whole race, thus won by a gigantic margin. Minutes and minutes. I did feel pretty good. It was super cold and wet. I seem to feel better the worse the conditions are. I do know how to ride well in adverse conditions. Probably just because I’ve done it so many more times than most riders. But, I always feel good when I have cold water on my legs. I’m not sure what that is all about, it just is.

Catherine won the woman’s race. There were a lot of women there. Two groups and probably 20-30 total. That is pretty cool. Catherine was running pretty mediocre. So mediocre that she was in 3rd with one lap to go. Bill and I gave her a clean, light, bike with 2/3 a lap to go and told her she could still win since she was only 15 seconds back. To our surprise, and maybe hers, she won convincingly. I guess that none of the women could clip in the last 1/2 a lap, but Catherine just kept pedaling instead of wasting time trying to clip in and won by 20 seconds or so. That is what cyclocross is all about in adverse conditions. Making the right choices to go as fast as you can at any given point.

It’s supposed to be nearly 60 here today and I’m just going to go for a long ride. Long for this time of the year. Maybe 70 miles or so. I didn’t ride a couple days last week and should try to catch up. I’m not sure this race was a judge of any kind of fitness. I felt great, but that doesn’t necessarily mean I have any form. 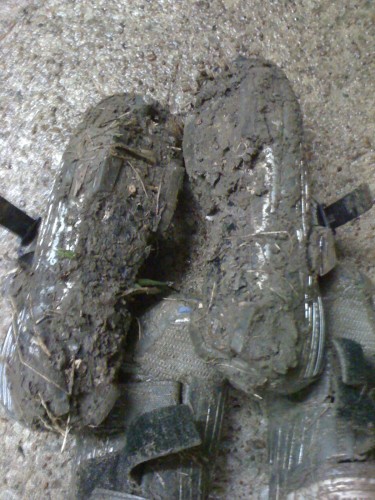 Catherine's shoes after she had cleaned them some. You can see why it would be hard to find the pedals. 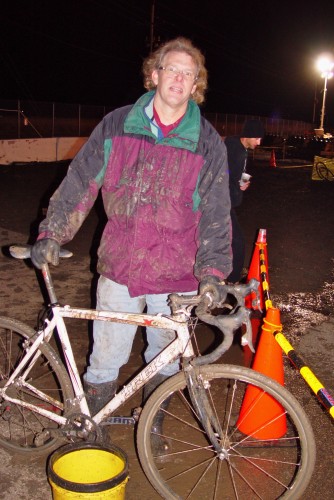 Kris after working the pits. He might have been muddier than me. 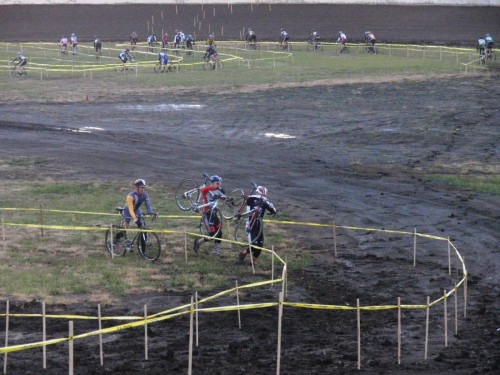 The infield when it was still light out. 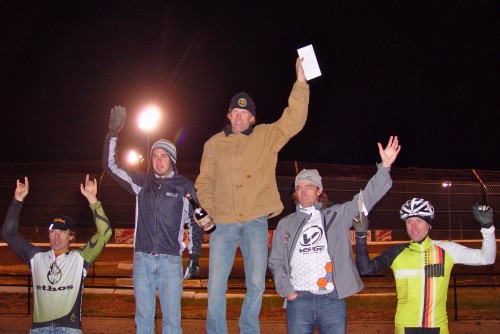 I usually can't condone showing up for the podium not in your team kit, but it was a super damp cold. I was still freezing hours later.

One thought on “Racing under lights”