I raced about a 1/3 of a cyclocross today in Kansas City. I had planned on doing 3/3 of a cyclocross. Not sure what to say other than it is impossible to rotate your legs in circles when both hamstrings are cramped. And that happened in less than 20 minutes. Twenty minutes of racing. I’d ridden 50 miles, at a 20mph average, into a stiff headwind, on a very hilly road, to get to the race. 13 minutes before the scheduled start. Next to Brian Jensen. Not a good thing. They did start 15 minutes late, so that was something. But, not enough.

My hamstrings had been feeling weird all day. But, eating at 8 am, 6 hours before the race and then doing the before mentioned trek, didn’t help much. The weird thing is that I didn’t see it coming. I’ve hardly ever cramped up a hamstring. Never both simultaneously. I had been feeling weird back in Kansas this past week. Allergies or something. But, today I felt pretty great riding over there. But, I did run out of juice as we had to pick up the pace to make the race start. Then, there wasn’t much to eat in the van. And no coffee. Not very good planning on my part, but at local races, I don’t usually cross all my t’s and dot all the i’s. Maybe I need to start. The sport is hard enough, that there isn’t much leeway for sloppiness in preparation.

The course didn’t help much either. It was more of a grass circuit race. 1.5 miles in length. On the side of a hill. 50% up and 50% down. And it had rained a bunch yesterday, so it was super slow. Not peanut butter slow, but sticky slow. Slow enough that I only rode in my small ring down hill pedaling. No rest.

So, I followed Shad Smith, KCCX around for most of the first lap. I was pretty comfortable. I got in the lead climbing back to the start line. The 2nd time over the barriers, I felt a small twinge in my left hamstring and though, “shit, it is way too early for that to be happening.” I backed off a bit and thought maybe I could ride into a pace. Then the next lap over the barriers, both hamstrings cramped. I can’t think of a race I’ve ever been in that I quit when I was leading. But, like I stated above, there is nothing you can do to pedal a bicycle in that situation. So, I just stood on the side of the course as everyone rode by. I couldn’t really move for 10 minutes or so, then just rode back to the van. Josh Johnson, Big Shark, won the race over Jonathan Schottler, Big Shark, with Shad Smith, KCCX, coming in 3rd. (Shad lost the sprint for 2nd because he was never told it was the final lap).

I can’t really complain too much. I haven’t ridden a cross bike one pedal stroke before today, but that wasn’t the issue. I guess I need to address this hamstring thing pretty quickly. There was only 10 meters of running on this course. So, I cramped up after 30 meters of running. That probably wasn’t it. I did have a very hard training day. Not such a hard race day though.

So, if anybody has any intelligent thoughts about how I can address this quickly, feel free to tell me. If not, I guess I’m going to have to try to figure it out myself, which is a long shot. And it won’t be quick. 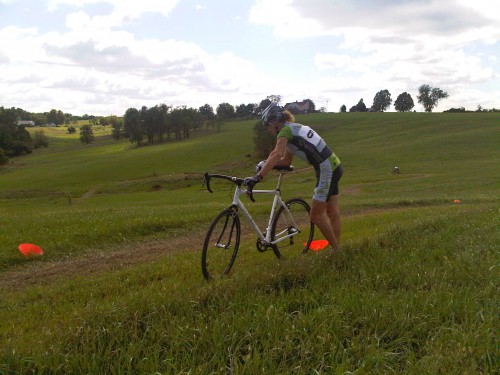 Not the photo you want to see of yourself at a race. 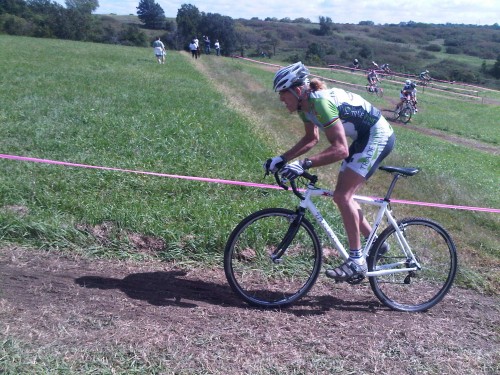 Early in the race when I was leading (and still riding). 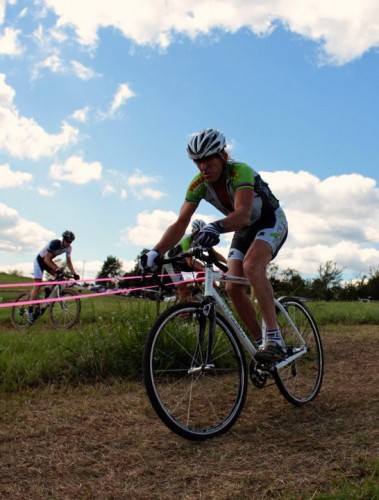 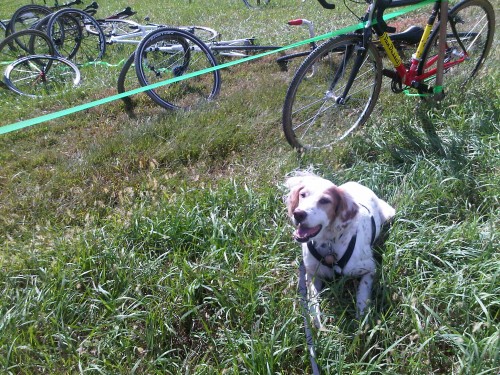 Bromont hadn't been to a bike race for a few weeks so he was in dog heaven. He loves cyclocross.

8 thoughts on “DNF’d First Cross Race of the Season….not good”