Just finished dinner. It’s 1:48 am. Perfect. This race was destined to be a field sprint. Which it was. Not without some minor drama. Daniel Holloway, Bissell, sporting his recently won Professional National Criterium Champion Jersey, decided to ride the fastest lap of the race from the gun. He was going very fast. Too fast for my liking. I had warmed up all the way from the car to the start line, which was probably a 1/4 mile.

Anyway, there are a few good professional riders here. And a lot of good elite riders. About 130 starters. The course tonight was a flat 4 corner criterium. With super wide open streets. It is easy to take most of the corners 5 abreast. A few breaks got up the road. A serious move went with about 10 laps to go. Scott Monninger, Big Shark, Daniel Holloway, Bissell, Chad Hartley, Kenda and a couple others were up the road. Brian made a move to bridge with one Kenda guy taggin’ on, but didn’t get up to it. But, we were all back together with less than 3 laps to go.

I’m not sure what happened to us the last lap. I hooked up with Bill and was moving up towards the front on the last lap. Nick was on Bill. I missed a couple easy moves and was too far back with 1/2 lap to go. I had to make a sketchy move and that was the end of moving up my team mates. I came out of the last corner, which is 300 meters to the finish, around 15th and passed 8 guys, I guess, before I came to the finish line. So I ended up 7th. That wasn’t a stellar finish for me here, but it could have gone a lot worse. Bill was in the lower teens. I’m not sure about Nick.

Daniel Holloway did his jersey proud and won the race pretty convincingly. I’m not sure who was 2nd, but Brad Huff, Jelly Belly was 3rd and Josh Carter, San Jose was ahead of me too. The race was pretty quick. We had nearly a 29 mph average speed for the hour 2 minutes and my maximum speed was nearly 40.

The crowds at this race are great. The neighborhood was pretty run down when I first started racing here and now there are great restaurants, coffee shops and lots of artsy residential housing. There are 1000’s of people who never see another bicycle race the whole year that come out and cheer like crazy. Pretty fun. Especially at night.

Tomorrow’s race is in the late afternoon. Another flat, wide open race. Good leg speed workout I guess. But, the problem with that is when I really need to go fast I just drop it into an 11 and slug away. That kind of counter acts that training still I think. ’til then. Chow ciao. 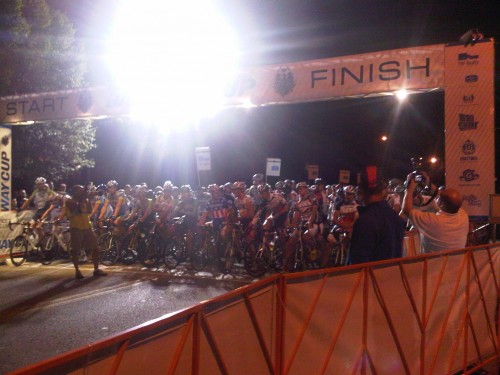