Short update. Just finished another wide open flat criterium. It didn’t go so well. A big move got away early. We, TradeWind Energy, had Nick Coil in the move. After a few laps, another group of 5 bridged up. This group had Daniel Holloway in it, plus another Kenda rider. Not good. But, it went away so quickly, that by the time I realized it was gone, it was gone. Brian tried to bridge up to the new bigger move with Josh Carter and Scott Monninger, but they only made it half way before Josh pulled the plug, then Brian and Scott.

Then it got worse. Nick got popped out of the 11 man group along with 3 others. Then there were 7. The field made an effort and took some time out of the move, but it still had 30 seconds with 5 laps to go. Rumor has it that the break split up at the end when Jonathan Jacob, from Nuvo Cycling Team, Indianapolis, took off towards the end. Holloway tried to bridge alone, but blew. Jacob won alone. Dave Hendersen, from Columbia Missouri, Master’s Criterium National Champion, came in alone for 2nd. Then Eric Young, another Nuvo rider was 3rd. Holloway was 4th, followed by two Kenda Pro riders.

The field got moving the last couple laps. I was in pretty good position with 1/2 a lap to go. Brad Huff, Jelly Belly, had taken off alone. On the last stretch before the final corner, I got behind my team mate, Bill Stolte, and told him to go. He jumped to the right from about 10 back. I was on Bill, but our misfortune was that Brad Huff was being swallowed by the field and swung off to the right. I saw that Bill was going to get screwed up, so I tried to punch my way back into the line coming by on the left. Chad Hartley, Kenda was leading out the sprint, much like he did last year. I finally gave up on the punching in plan and just decided to go around the outside in the last corner and hope for the best. The best wasn’t to my liking. I ended up 7th or 8th in the field sprint, which is around 15th for the day.

Tomorrow’s race is on the hill in the Italian section of St. Louis. A much more challenging course, but still usually a field sprint. A better workout for sure. After the race, they have a spaghetti feed at the lawn bowling club. It is usually pretty fun. Kind of an eclectic happening. Weird mixture of athletes and old Italian folks. 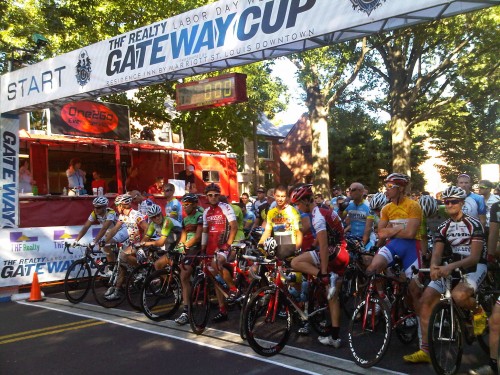 Another photo from the startline. 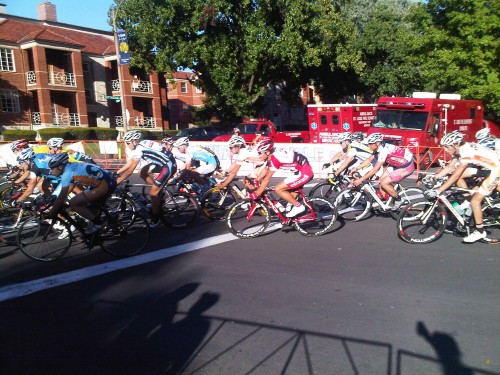 There is a ton of old brick buildings in St. Louis. It is nice riding around the neighborhoods.