Yesterday I drove 600 miles back from Delavan, Wisconsin to Kansas City to do a local ride at the Spin Pizza in Overland Park. It was pretty much on way back to Topeka though. It was a very good time. It was refreshing hanging out with a bunch of people that like to ride bicycles, but don’t have any intention to ride competitively.

There were around a 100 people there I’m guessing. They do this ride every Monday and split into a three or four groups so they don’t clog up the roads. I rode along with the long ride, which was about 20 miles. I’d say that nearly 10% or the people rode in tennis shoes. There were bikes that cost $8000 and bikes that cost $100. It was kind of weird, but it seemed like the worse of a bike the person rode, they seemed to have more enthusiasm for cycling . Maybe it was just the newness or infatuation with the sport that fueled their excitement.

I must of told at least 10 people that they needed to raise their seats. Most of them needed to raise their seats a lot. One lady said back to me that she couldn’t reach the ground with her foot when she stopped at a light unless her seat was in that position. You can imagine how low this seat was if she could do that, right? I told her she needed to step forward and and that the top tube height was the limiting factor there. And her seat position needed to be dictated by her leg length and that it was supposed to be the distance between the seat and the pedal and not the distance from the seat to the pavement. Funny.

Anyway, there were 5 of us there from the Tradewind Energy/Trek Store Team. I think everyone had a good time. It is very refreshing talking to people with such enthusiasm. You don’t get that much at a normal PRO 1/2 race.

Afterward we stayed at Spin Pizza and had super good stone fired pizza, salad and beer. It was great. I didn’t get back to Topeka until after 10pm. It took a while to unload. I haven’t been home for a month and Trudi for 2. It might take some readjustment time. You kind of get use to living out of a bag. Seems like maybe most of the other stuff is just other stuff, wasn’t missed much and is not needed. 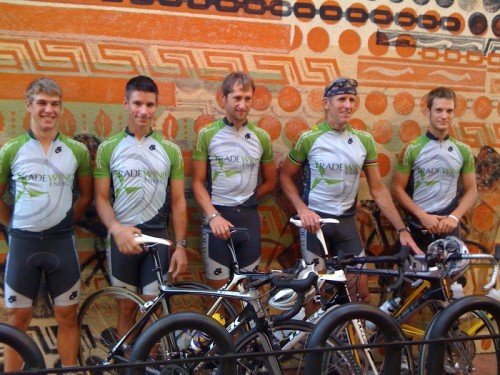 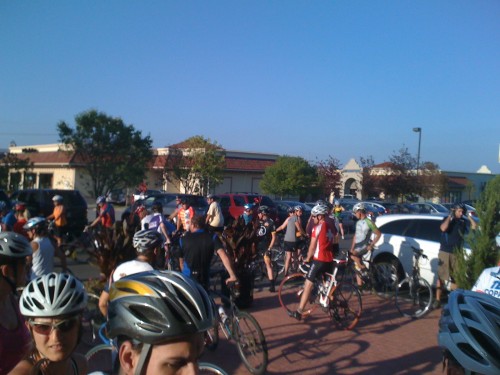 Lots of people waiting for the ride. 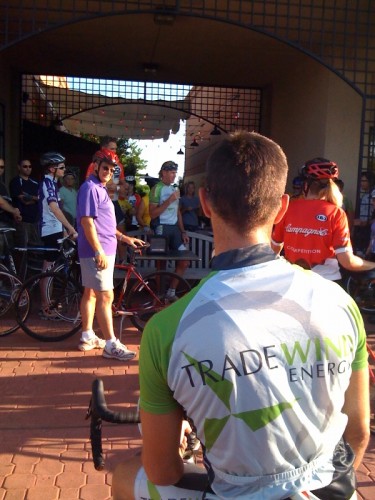 I introduced the Tradewind Team and said a few words. (Bill in the foreground.) 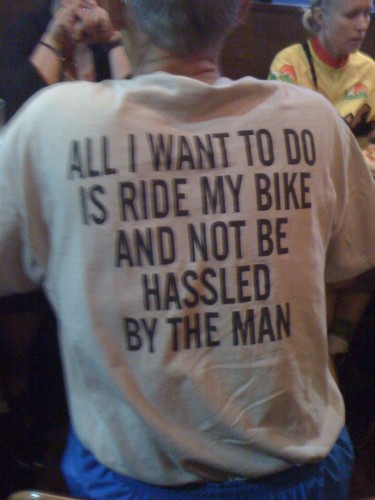 Kind of liked this guy's T-shirt.